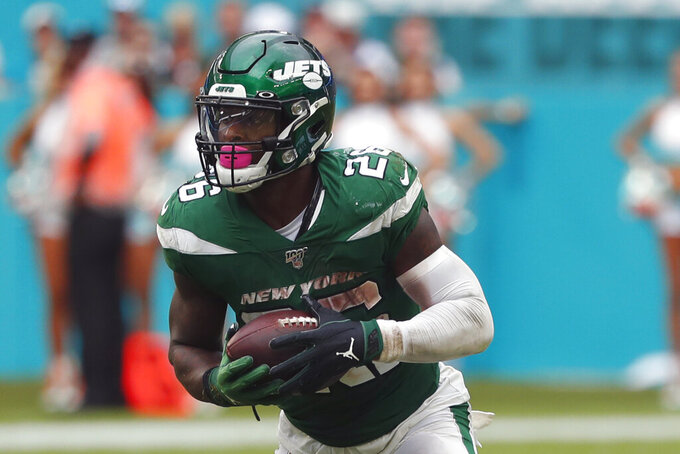 FLORHAM PARK, N.J. (AP) — The New York Jets expect Le'Veon Bell to be in the backfield when they square off against the Giants.

Sam Darnold and the offense could also have tight end Chris Herndon on the field for the first time this season.

Both Bell and Herndon were listed as questionable for the game Sunday at MetLife Stadium, but both took positive steps this week at practice.

Bell is dealing with knee and ankle ailments and was limited during team drills Friday for the second straight day after sitting out Wednesday. But, he's likely to play, barring a setback.

"I'm just going to keep working to get back, and get ready for Sunday," Bell said Thursday after practice.

Herndon was suspended for the first four games for violating the NFL's substance abuse policy. The second-year tight end has missed the last four games after injuring a hamstring while working out and was limited at practice all week.

"Chris has looked really good," Darnold said this week. "He's been telling me that he is feeling really good, so hopefully he can go out there and be an impact player for us."

Herndon developed a quick rapport with Darnold last season when the two were rookies, with the tight end catching 39 passes for 502 yards and four touchdowns. The hope is that Herndon will be able to boost a Jets passing offense that currently last in the NFL while averaging 157.3 yards per game.

"He's just another weapon we can use," Darnold said. "He's such a good tight end, he's a good run blocker. If we need him in pass (protection), he's good at that, too, and he's really, really good at running routes and catching the ball."

Linebacker C.J. Mosley is expected to miss at least a few more weeks with a groin injury and is the only Jets player ruled out for Sunday.

Left tackle Kelvin Beachum is questionable, but is likely to return Sunday after missing the last three games with an ankle injury. His absence on the Jets' offensive line has been noticeable as Darnold has been pressured early and often as Gase tried to find a workable combination up front.

NOTES: CB Bless Austin was activated from the non-football injury list and could make his NFL debut Sunday. He injured a knee in Rutgers' season opener last year and missed the rest of the season. It was the second straight year a knee injury shortened a season, so Austin has been working his way back for the last several months. Defensive coordinator Gregg Williams said the major focus has been on getting Austin, a sixth-round draft pick, prepared for the speed of the game and overall talent level in the pros. "He's adapted really quick, he's come on strong," Williams said. "But the big thing here for all of us, I want you to think about this — and our guys have done a good job talking to him — he hasn't played since what week what of last year? And I haven't seen Rutgers on Alabama's schedule (joking). The big thing here is that all the guys here at this level can flat play." ... Gase downplayed his conversation Monday with S Jamal Adams, who put off talking to the coach and GM Joe Douglas for several days after he was bothered by his name being mentioned in trade talks. "Yeah, I feel like you guys are making it a little bigger than what it was," Gase said. "We talked Sunday, we talked Monday, Tuesday, Wednesday. For me, I was moved on. I told him, I was like, 'Man, just keep trying to lead and play well. Do everything you can to help us win.'"