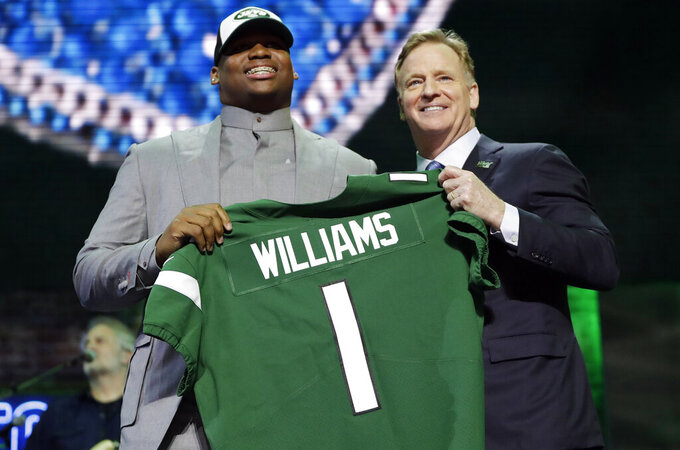 FLORHAM PARK, N.J. (AP) — Mike Maccagnan resisted the urge to trade down or make his first pick based solely on need to kick off the New York Jets' draft weekend.

He ended up with perhaps the best overall talent in this year's class, taking Alabama defensive tackle Quinnen Williams at No. 3 on Thursday night.

It's hard to criticize that selection — a no-brainer — by the Jets general manager, even if taking a punishing pass rusher would have filled one of the team's biggest needs.

"When you factor (need) into your evaluation process," Maccagnan said, "you run the risk of potentially making a mistake."

Maccagnan made it clear New York was open for business to trade on the draft's opening night but found no suitable offers — and instead bolstered his defensive line with Williams.

As it turned out, Maccagnan got his edge rusher Friday night, when he took a gamble on Florida's talented but polarizing Jachai Polite in the third round.

Then came some wheeling and dealing.

The Jets moved up one spot by trading with Minnesota to take USC offensive tackle Chuma Edoga with the 92nd overall pick. New York then traded down twice early Saturday before grabbing West Virginia tight end Trevon Wesco in the fourth round.

Maccagnan wrapped up the Jets' draft haul by making some risky selections: Minnesota linebacker Blake Cashman in the fifth round, and Rutgers cornerback Blessuan Austin in the sixth. Both come with injury concerns — Coleman had three shoulder surgeries in college, and Austin tore the anterior cruciate ligament in his left knee twice.

"Like everything else, you're never really done building the roster," Maccagnan said. "You're constantly doing that, but we felt at this point in time we made some good strides, and we have some good pieces in place."

Here's one last look at the Jets' draft:

It all starts with Williams, of course. For the third straight year, the player many considered the best in the draft "fell" to the Jets. It was safety Jamal Adams in 2017 and quarterback Sam Darnold last year. Both are cornerstones of the franchise, and Williams has a chance to quickly become one, too.

Polite was initially thought to be a first-round talent, but his draft stock plummeted because of a hamstring injury that affected his NFL combine performance and pro day. Nagging character issues also added to the flaws, but the Jets could be getting a steal if Polite's mind and body are right as he begins his pro career.

Edoga could eventually work his way to a starting role at right or left tackle, and he can play guard, too. Oh, and he and Darnold were once teammates at USC, which certainly doesn't hurt.

Wesco is a big blocking tight end who could quickly become a favorite of running back Le'Veon Bell if he can help blow open some holes up front.

Cashman and Austin are developmental players who might make their marks early on special teams. Maccagnan said Austin could start camp on the physically unable to perform list, so it's uncertain how much impact he'll make this season.

Trading up to take Edoga had some fans scratching their heads, especially those hoping for a cornerback or center at that point in the draft.

Those same fans were a bit baffled a round later when the Jets took a blocking tight end in Wesco.

There will be plenty of excitement about New York's defensive front with Williams combining with Leonard Williams, Henry Anderson, Steve McLendon and Nathan Shepherd, the team's third-rounder last year, expected to put lots of pressure on quarterbacks up the middle.

A motivated Polite could also eventually give the Jets a consistent pass-rushing presence from the outside that they have lacked since the days of John Abraham in the early 2000s.

The other selections, perhaps other than Wesco, could take some time before becoming regular contributors.

New York still has quite a few holes, including at cornerback, where Trumaine Johnson is a certain starter on one side and Darryl Roberts appears to be the favorite on the other. Morris Claiborne remains a free agent and is rehabilitating an undisclosed injury, said Maccagnan, who also didn't rule out bringing the veteran back.

Center remains a question mark, too, with Jonotthan Harrison the leading candidate to start. Jon Toth, who spent last season on the practice squad, is the only other player at the position on the roster, so the Jets could explore bringing in a veteran free agent.