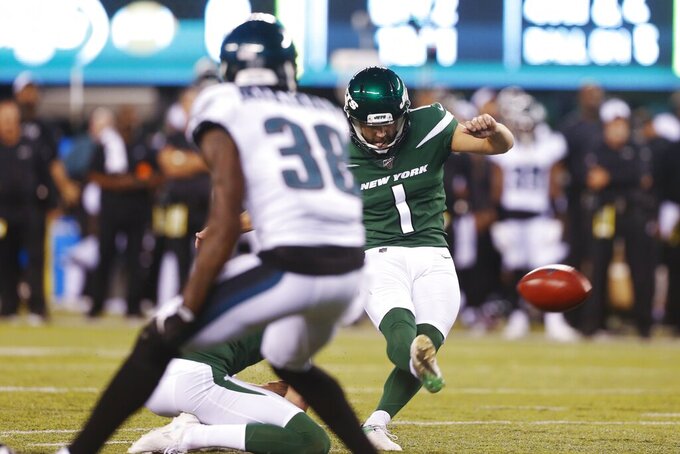 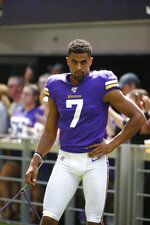 NEW YORK (AP) — The New York Jets addressed their kicking woes by adding a kicker who had his own struggles this summer.

Kaare Vedvik was claimed off waivers from the Minnesota Vikings on Sunday, replacing Taylor Bertolet, who was waived.

The 25-year-old Vedvik, a native of Norway, was acquired by Minnesota last month from Baltimore and missed three of four field goals while punting five times for an average of 45.2 yards for the Vikings. He was released by Minnesota on Saturday.

Vedvik spent last season on the Ravens' injured list after being signed as an undrafted free agent out of Marshall. The Jets have had interest in him since last year and are intrigued by his dual-threat ability as a placekicker and punter.

New York thought it had its kicking situation in place entering training camp, but Chandler Catanzaro abruptly retired after struggling in the first preseason game. The Jets brought in Bertolet, who spent last summer with them, but he had an up-and-down summer that included him missing two extra points in his first game. With a chance to solidify his spot in the preseason finale, Bertolet made two field goals to account for all the scoring in a 6-0 victory over Philadelphia — but missed three other tries.

Berrios spent last season with the Patriots and could replace Dortch as the Jets' primary punt returner.

Franklin-Myers adds depth at New York's edge rusher spot. He had a strip-sack of Tom Brady in the Super Bowl in February.

Jackson is a versatile defensive back who can play both safety and cornerback.

The Jets signed seven players to their practice squad, including former Australian rugby league star Valentine Holmes. As part of the NFL's International Player Pathway program, the Jets and the other AFC East teams have an exemption for an international player so Holmes won't count against the 10-man limit. Holmes tied for the team lead with five receptions in the preseason finale against the Eagles.

Also signed to the practice squad were offensive tackle Calvin Anderson, who made headlines with his unusual ability to solve a Rubik's Cube behind his back; quarterback Luke Falk, who outplayed Davis Webb in the summer; linebacker Jamey Mosley, whose older brother C.J. is the Jets' middle linebacker; offensive lineman Ben Braden; cornerback Kyron Brown; and wide receiver Jeff Smith.