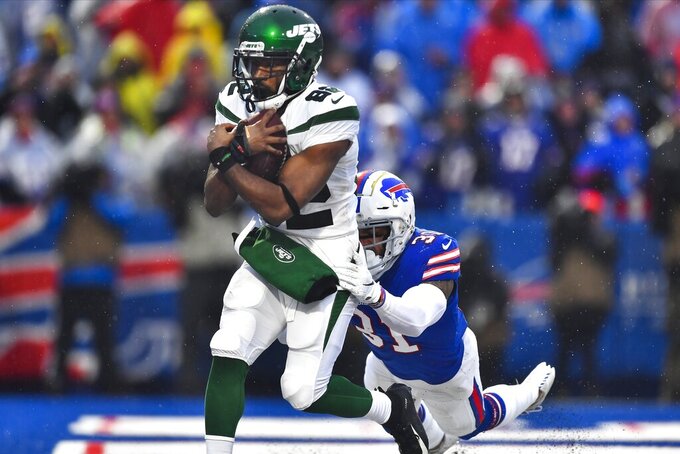 ORCHARD PARK, N.Y. (AP) — Josh Allen and the Buffalo Bills can finally look ahead to making their playoff preparations knowing they're headed to Houston next weekend.

For Sam Darnold and the New York Jets (7-9), they have a long but hopeful offseason ahead in believing their 6-2 second-half record has them poised for a better future.

“I promise you, we'll grow from here and we'll get this thing going in the right direction,” Jets center Jonotthan Harrison said after New York closed with a 13-6 win at Buffalo on Sunday. “It was a slow start (to the season). But at the end of the day, finishing the last half of the season 6-2 is huge. ... And that shows a lot about the character of the guys in the locker room.”

Harrison was particularly referring to Darnold, the second-year quarterback who shook off a 1-4 start and a bout of mononucleosis to help the Jets avoid finishing with double-digit losses for what would have been a franchise-worst fourth consecutive year.

In a game with very little on the line for both teams, Darnold hit Jamison Crowder for a 1-yard touchdown pass in the fourth quarter to beat Buffalo's backups.

Even Jets running back Le'Veon Bell saw promise despite finishing a season in which he failed to top 100 yards rushing.

“We're starting to get the ship sailing in the right direction. I think we started finding our groove and finding out exactly what our image is going to be,” said Bell, who had 41 yards rushing and added 36 receiving against Buffalo. “I look forward to the offseason and obviously getting better and getting in crazy shape and building on what we got.”

Buffalo dropped to 10-6 — still the team's best record since an 11-5 finish in 1999 — after resting a majority of their starters following the first quarter. The Bills were already locked in as the AFC's fifth-seeded team. The only unknown was learning they'd be traveling to face the AFC South champion and fourth-seeded Texans in the wild-card playoff after Kansas City defeated the Los Angeles Chargers.

“It's anything can happen. We are in the dance. We know that. We understand that,” said Allen, who played just two series before being replaced by backup Matt Barkley. “At the end of the day, it's playoff football. It's win or go home.”

Allen didn't need reminding his last trip to Houston ended with him spraining his throwing elbow after being sacked in a 20-13 loss in October 2018.

“Yeah, thanks for bringing that up,” said Allen, who wound up missing four games due to the injury.

Much like Darnold, a fellow member of the 2018 first-round draft class of quarterbacks, Allen has shown signs of improvement from last year. Allen finished this season with 20 touchdowns passing, matching the most by a Buffalo player since Tyrod Taylor in 2015. And Allen's 3,089 yards passing were the most in Buffalo since Ryan Fitzpatrick had 3,400 in 2012.

Otherwise, the game was a defensive struggle that befitted the sloppy conditions, with a persistent drizzle falling for most of the afternoon.

With the score tied at 3, and following Jets kicker Sam Ficken missing two of his first three field-goal attempts, Darnold oversaw a nine-play, 75-yard touchdown drive, which he capped by hitting Crowder cutting across the middle on second-and-goal with 13:31 left.

The touchdown was Darnold's 19th of the season, and 36th of his career. He fell one touchdown passing short of matching Joe Namath's record for most by a Jets player in his first two seasons.

The Bills, meanwhile, settled for field goals with Barkley overseeing an offense that began the day minus starters John Brown and Cole Beasley, and with just three receivers active.

Barkley was 18 of 35 for 232 yards with two interceptions and a lost fumble. The lack of chemistry showed on Barkley's second interception with 5:17 remaining. After gaining 45 yards on three plays, Barkley lobbed a pass directed toward T.J. Yeldon only to have the running back turn the wrong way, with the ball easily intercepted by Arthur Maulet.

The Bills have question marks heading into Houston. Starting cornerback Levi Wallace was carted off the sideline with a right ankle injury. He was hurt when his cleat got caught in the turf in intercepting Darnold's pass that caromed off the back of teammate Taron Johnson's helmet.

Bills right tackle Ty Nsekhe was also carted off the sideline after hurting his ankle on the opening drive of the third quarter. Nsekhe had just returned to the lineup after missing five games with an ankle injury.

Buffalo was so depleted at cornerback, receiver Isaiah McKenzie saw a few snaps on defense in the fourth quarter.

Bills linebacker Lorenzo Alexander confirmed this will be his last season, but the 36-year-old is more focused on the playoffs.

“Yeah, obviously, that's a decision I made before the season,” the 13-year veteran said when asked if this could have been his final home game. “We still have to play at Houston next week, so my mind hasn't even processed that transition yet.”

Alexander received a memorable send off.

Unbeknownst to him, the Bills had his 11-year-old daughter Zoie sing the national anthem.

“To be able to sing in front of 50,000 people like that, with the confidence, it was cool,” said Alexander, who was joined by his family on the sideline during the anthem. “As a dad, I'm like, ‘Don't forget the words. Don't forget the words.' But she did an excellent job. I know she brought some of the guys to tears."

The Bills also paid tribute to Alexander by calling time out in the first quarter to allow him to leave the field for one last time in Orchard Park.

Buffalo Bills running back Frank Gore played his 226th career regular-season game, tying Emmitt Smith for most by a running back in NFL history.

Gore was coming off his first career game in which he had no yards from scrimmage. Starting in place of rookie Devin Singletary, the 36-year-old Gore was limited to playing the first half in which he finished with six carries for 26 yards and three catches for 16.