Jets confident Wilson's 'in a good place' after 4-INT game 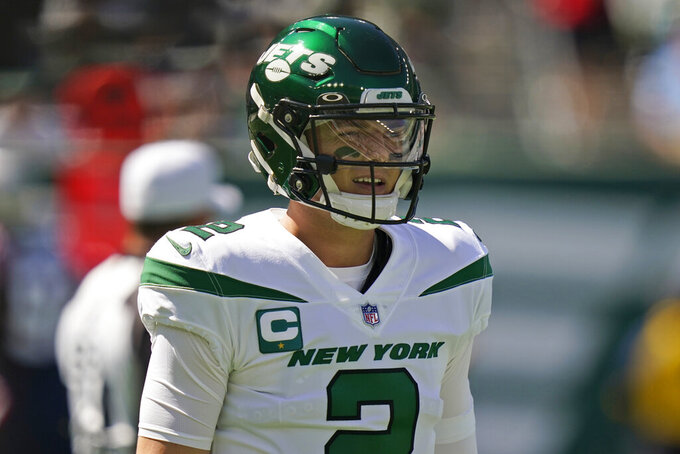 NEW YORK (AP) — Zach Wilson had a day to forget — even if it will be difficult for Jets fans to do just that.

The rookie threw four interceptions, including his first two passes of the game, in New York's ugly 25-6 loss to New England on Sunday.

Alarming? Sure. Concerning? Maybe. Time to wonder whether the Jets overestimated Wilson's talent and he's doomed to be a bust?

Two games in and Wilson has looked very much like a rookie, with an uneven but mostly solid opener at Carolina, followed by a brutally bad performance in Week 2. He took responsibility for the mistakes after the game against New England, but the key is to not let it bleed into next weekend — when the 0-2 Jets travel to Denver to face the 2-0 Broncos.

Wilson was 19 of 33 for 210 yards and the four INTs, and also heard it from the frustrated MetLife Stadium crowd — who booed the young quarterback after an overthrown pass in the fourth quarter.

After an outing such as that, it's natural to wonder whether a player's confidence is rocked.

Saleh insists he has no such concern when it comes to Wilson.

“He's such a resilient young man,” the coach said. "I mean, he can probably recite every single play that happened and he's going to want to talk about it, go through it and learn from it. I know he's going to get better from this.

That might be strange to hear, especially after watching Wilson seem overwhelmed and overmatched at times Sunday. But his mental makeup was one of the reasons the Jets jumped to take him at No. 2 overall. The playmaking ability was obviously at the top of the list, and New York is certain that will be the story more often than not.

"We all believe in him and we're all going to expect great things from him, but nobody ever said it was going to be easy. It's all about growing pains in this league and in life. I think he's going to bounce back. I know he will bounce back."

The running game. After a clunker in the season opener, the Jets' backfield was a bright spot against New England.

Ty Johnson had 50 yards on 12 attempts and Tevin Coleman ran for 24 on five carries as the Jets finished with an average of 4.9 yards. That came a week after they averaged a dismal 2.6 yards against Carolina. The offensive line deserves some kudos, too, by bouncing back from a bad Week 1 and having a solid performance vs. the Patriots.

Understanding the Denzel Mims situation. The 2020 second-round pick played three snaps on offense in the opener and was inactive Sunday. Saleh has repeatedly referenced special teams value for anyone not a starter, and that's something Mims doesn't provide.

The speedy 6-foot-3 wide receiver is buried on the depth chart behind starters Corey Davis, Jamison Crowder and Elijah Moore. Keelan Cole is the No. 4 receiver, and then there's Braxton Berrios (kick/punt returner) and Jeff Smith (starting gunner on punts). So that has left Mims out of the mix.

Mosley. There were some questions as to whether he would be able to approach the level at which he once played. He opted out last season because of the coronavirus pandemic and missed all but two games in his first year with the Jets with injuries. Well, he showed he's still a playmaker, leading the Jets with 10 overall tackles and a pass defensed against the Patriots.

“That's not really a surprise to me or people that know my type of game,” Mosley said. “But it's been two years and I finally put some new stuff on tape.”

Wilson. It's tough to pick anyone other than the Jets quarterback after Sunday.

Saleh reported no new injuries from the game. Crowder was a surprise scratch as he continues to recover from a groin injury. He worked out before the game, so he might be ready to play at Denver.

11 — The Jets have lost that many in a row in the month of September and are 0-2 for the third straight season. New York's last victory in September? Sept. 10, 2018, at Detroit in Sam Darnold's NFL debut.

Wilson and the offense need to get right fast because they'll be facing a Broncos defense that ranks among the NFL's best after two games. A loss and the Jets would be looking at a third straight 0-3 start.