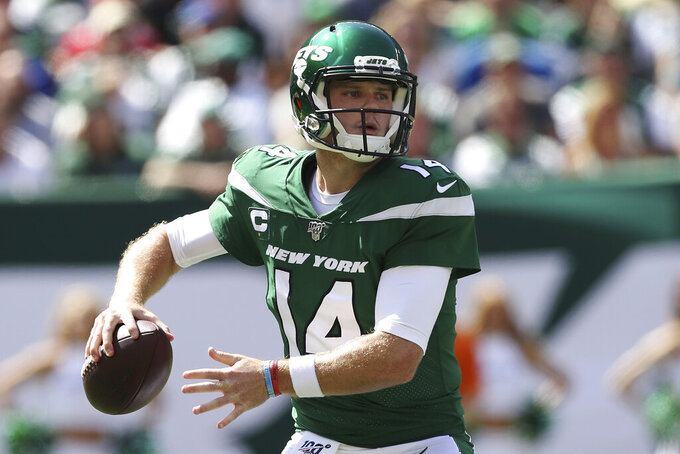 FILE - In this Sept. 8, 2019, file photo, New York Jets quarterback Sam Darnold (14) makes a pass during an NFL football game against the Buffalo Bills, in East Rutherford, N.J. Darnold has been cleared by doctors for non-contact activities, but his availability for New York's game at Philadelphia remains uncertain. Coach Adam Gase says Monday, Sept. 30, 2019, that Darnold can begin throwing footballs at practice this week but can't yet lift weights as he continues to recover from a bout with mononucleosis that has sidelined him the last two games. (AP Photo/Steve Luciano, File)

NEW YORK (AP) — Sam Darnold can finally start throwing footballs again. When the New York Jets quarterback will be able to do so in a game remains uncertain.

Darnold was cleared Monday for non-contact activities, but he can't yet lift weights and declined to say whether the swelling of his spleen — a serious symptom of mononucleosis — has dissipated.

"I'll let kind of the specifics come out when they do, and when Coach (Adam) Gase wants to disclose that information," Darnold said during a conference call. "For me, it's just doing what the doctors say. It's out of my control.

"My spleen, at this point, is gonna do what it's gonna do."

Now, that's a statement neither Darnold nor Gase — or anyone else around the Jets — ever expected to hear.

But, it has been that type of start to the season for New York, which is 0-3 and coming off a bye-week break that did little to clarify the health statuses of several key players.

The uncertainty over Darnold's health means Luke Falk could make his second straight start. Week 5 had been the goal for Darnold and the doctors, but that might prove to be overly optimistic.

"There's just a lot of gray right now," Gase said of Darnold, adding that the Jets have "a lot of boxes that we've got to check before we can say, hey, we're rolling on Sunday."

Elevated from the practice squad two weeks ago, Falk played in place of Darnold and the injured Trevor Siemian in Week 3 at New England before the Jets' bye-week break.

"It's not an ideal situation," Gase said of not knowing whether he needs to prepare Falk to start against the Eagles or if Darnold will be ready to go. "It's one of those things where it's the sooner the better that I have an answer."

Darnold would like to have a full week of practice before he plays in a game, so Wednesday will be a crucial day for him and the Jets.

"That would be my goal," he said. "But if I can't do that and I can still play in the game on Sunday, then I'm going to do it. I'm going to do what I can to get out there with my guys because I miss the game too much."

Darnold was diagnosed with mononucleosis on Sept. 11 and has missed two games because of the illness. He also recently acknowledged he was beginning to feel symptoms during the season-opening loss to Buffalo.

After staying away from the facility for a week until he was no longer contagious, Darnold returned to meetings while gradually regaining his strength and stamina. Meanwhile, the second-year quarterback has had to watch as his team got off to a tough start.

"Yeah, I'm super anxious to get out there," Darnold said. "But, right now, I've got to control those emotions and really let the doctors tell me what I've got to do and what needs to happen before I can get back out there. Hopefully, I get to do some more physical activity and we'll kind of go from there."

For now, that means throwing again and getting in work on the stationary bike and some running.

"Nobody should hit him anyway (in practice), but right now what they're telling us is he can't have any contact," Gase said of Darnold. "So, if we were playing the game tomorrow or Wednesday, he wouldn't be able to play because he hasn't been cleared for contact."

Beyond that, though, it remains a waiting game for Darnold and the Jets.

"If they say I can get some cardio in, get in as much cardio as I can," Darnold said, "and making sure that I'm in shape so that if I were to go out there and play a game that I'd hold up."

Darnold says he actually feels his energy level is 100% now and has felt that way for at least a week. He insisted he feels as though he could play right now from a physical standpoint, but acknowledged he says that despite not having practiced the past three weeks and needs to sharpen his throwing and timing.

"I think that's kind of the most frustrating part about this," Darnold said. "It's what makes me the most anxious is just feeling 100%, but not necessarily being able to go out there and do what I love to do."

By Tom Canavan just now
By Tom Withers just now
By Schuyler Dixon 53 minutes ago
By The Associated Press an hour ago
By Dennis Waszak Jr. 2 hrs ago