Jets' Darnold hopes to return to field in Week 5 vs. Eagles 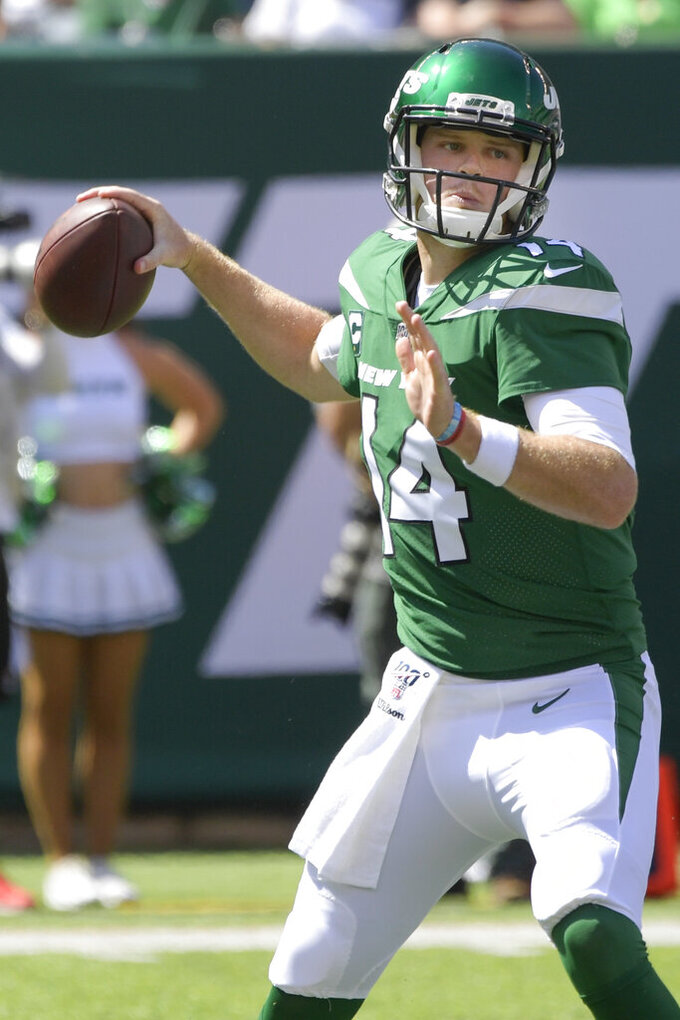 NEW YORK (AP) — Sam Darnold hopes to be back on the field sooner than many expected.

The New York Jets quarterback said Tuesday during his weekly spot on "The Michael Kay Show" on 98.7 ESPN New York that he's feeling much better while recovering from mononucleosis and is aiming to return in Week 5 against the Philadelphia Eagles. That would mean he would miss only two games.

"There was a really bad four-day stretch there where I also had strep throat during the mono, so it was a bad few days," Darnold said in his first public comments since becoming ill. "The worst thing about this sickness is that now that I'm feeling better, I still can't do anything. There's nothing I can do about it. So, that's the worst part about this.

"And the timing couldn't be worse, either. You know, right at the beginning of the season."

Darnold watched New York's 23-3 loss to Cleveland on Monday night at his home with his parents "like a normal fan" and couldn't believe when backup Trevor Siemian went down with what ended up being a season-ending ankle injury.

"When it initially happened, I actually had a little episode," Darnold said. "I went in the room and started screaming into a pillow and was just punching my pillow as hard as I could. It was tough, man. You never want to see that for a teammate."

Third-stringer Luke Falk will start against New England on Sunday.

The 22-year-old Darnold said he's unsure how he contracted the illness, but added that he began feeling some effects from it a few nights before the Jets' season-opening loss to Buffalo. He was 28 of 41 for 175 yards and a TD in that game.

"I definitely wasn't feeling 100%, to be honest with you," Darnold said. "The night before, I got really bad night's sleep. Really a couple of nights before the game, I got really bad nights' sleep, waking up three or four times during the night with cold sweats, so I wasn't feel myself. During the game, with adrenalin and all that, you can sort of mask it. But I was probably around 80, 85% at that point. Obviously, I could've played better."

Last Wednesday, Darnold showed up at the team's facility feeling sick, and was sent home before practice.

He had tests run, and antibiotics weren't working completely. That's when doctors diagnosed him with mono, and coach Adam Gase went to Darnold's home to deliver the news with offensive coordinator Dowell Loggains and trainer Dave Zuffelato.

"At first, I thought they were joking," Darnold said. "I thought it was a sick joke and they didn't smile, didn't crack a smile, didn't laugh or anything, so I knew it was serious right away."

Darnold said he has lost only about 2 pounds while recuperating, focusing on making sure he didn't miss any meals and snacking when he could. Mononucleosis typically saps people's strength and appetites, causing weight loss.

He was able to return to the facility Tuesday for the first time since he was deemed no longer contagious.

"It's a bummer," Darnold said. "It's not something you ever want to go through as an athlete. I'm not complaining, though. I'm just going through it and doing what I need to do to get better."

Darnold said he hasn't picked up a football since he's been sick, as doctors' orders are for him to not do anything, so he can't work out or do anything to raise his blood pressure. The key is making sure his enlarged spleen — one of the symptoms of mononucleosis — goes to normal size before he can play again.

"I feel amazing," he said. "I mean, my energy is back up and I'm not stuffed up anymore. I feel fine. It's just that I've got to wait this thing out."