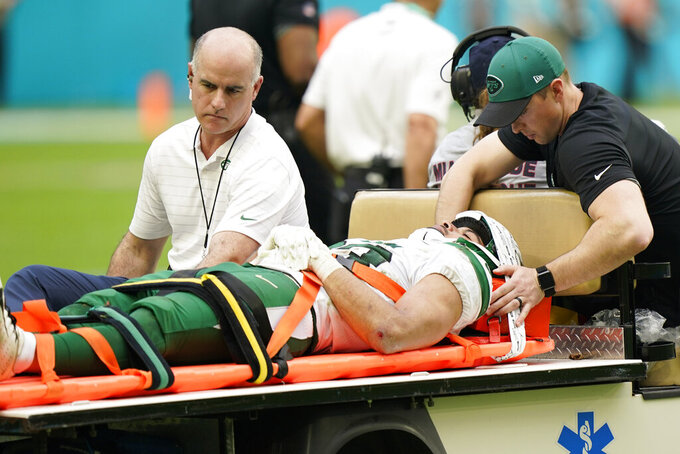 New York Jets Safety Elijah Riley (33) is removed from the game after he was injured on a play during the second half of an NFL football game against the Miami Dolphins, Sunday, Dec. 19, 2021, in Miami Gardens, Fla. (AP Photo/Lynne Sladky)

NEW YORK (AP) — Safety has been an unusually unsafe position for the short-handed New York Jets this season.

Veterans, rookies and players coming in from other teams — or even off the street — have provided a revolving door of defensive backs trying to bolster the back end of coordinator Jeff Ulbrich's defense because of injuries and illnesses.

“We are in new territory,” Ulbrich said Thursday, “for me, and I think for anybody involved in football.”

As of Thursday night, the Jets had just two healthy safeties listed on their active roster: Will Parks, who was claimed off waivers from Miami on Monday, and Kai Nacua, who was signed off San Francisco's practice squad Thursday. Elijah Benton is also on the practice squad. The Jets host Jacksonville on Sunday.

“I could not tell you today who’s going to be the starting safeties,” Ulbrich said.

One option will likely be rookie Jason Pinnock, a fifth-round pick who was drafted as a cornerback and has been mixed in lately at safety.

Pinnock's move from cornerback to free safety, Ulbrich said, wasn't necessarily a matter of him not being productive at his natural position.

“It was more of a thing where we asked our free safety position to go down and cover wide receivers, cover tight ends, so the man (coverage) ability for that position is paramount,” Ulbrich explained. “So, it just made sense.”

And now, Pinnock might step in as a starting safety.

“We’re going to still just keep balancing the reps as much as we can amongst the guys that we have available,” Ulbrich said. “And at the end of the week, we'll make a decision based upon who we think gives us the best opportunity to play well.”

So how did the Jets get in so dire a situation?

But Joyner tore a triceps in the opener and had surgery, ending his season.

Maye, one of the team's leaders and top all-around players, missed two games with an ankle injury, then suffered a torn Achilles tendon in Week 9. His season was over after six games.

Davis and Neasman are both on the COVID-19 list and likely unavailable Sunday. Riley hasn't practiced this week while going through the concussion protocol after being carted off the field at Miami last Sunday.

Colbert and Wilson are long gone after being waived early in the season. So are Natrell Jamerson and Sheldrick Redwine, who had brief stints with the team.

“We’ve been fortunate that our personnel department has done a good job of poaching some guys from defenses that are similar to ours,” Ulbrich said. "So there’s familiarity as far as the verbiage and some of the defensive stuff that we do.”

The Jets have two rookie linebackers who are converted college safeties in Hamsah Nasirildeen and Jamien Sherwood, but neither is available to play. Nasirildeen is also on the COVID-19 list and Sherwood is on season-ending IR with a torn Achilles tendon.

So Ulbrich and his staff, including defensive backs/safeties coach Marquand Manuel and defensive assistant Chip Vaughn, have spent the past few days trying to get the new players up to speed.

“A lot of early-morning meetings, a lot of late-night meetings, just a lot of extra,” Ulbrich said. “So, yeah, it’s tireless, but it’s a great challenge.”

At this point, the 42-year-old Manuel, who played eight NFL seasons at safety, is looking like a viable option.

“The way he runs around pre-practice and messes around with these guys, I still think he’s got some snaps left in him,” Ulbrich joked. “And he definitely, if he was allowed, he’d do it for sure. But yeah, he’s a great teacher, he’s a great motivator. He’s obviously very familiar with this defense. So, there’s no better man to get these guys prepared.”

NOTES: Backup QB Joe Flacco, who's unvaccinated, and RG Laurent Duvernay-Tardif, a licensed medical doctor who opted out last season to work on the pandemic's front line, were both placed on the COVID-19 list. That gives the Jets 20 players on the active and practice squad rosters and injured reserve on the list. Coach Robert Saleh also is sidelined after testing positive Wednesday. ... WR Jamison Crowder (calf) and CB Bryce Hall (non-COVID illness) sat out practice a second straight day.