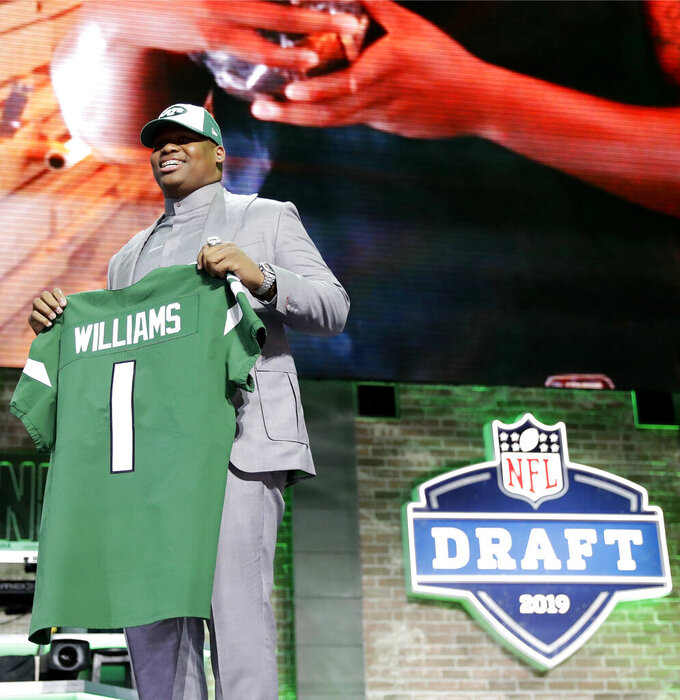 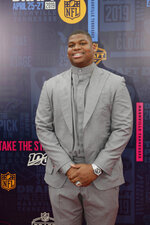 FLORHAM PARK, N.J. (AP) — The New York Jets got a big building block for their new-look defense with their first pick in the NFL draft.

The Jets fielded trade offers from several teams leading up to their selection and general manager Mike Maccagnan made it clear he was open for business. But, New York ultimately stayed put and took a player many considered the best in the draft.

"There was never an offer or a deal that we felt good enough to move back from," Maccagnan said shortly after drafting Quinnen Williams. "Quite frankly, we're very happy with the player that was available. We thought there was a good chance he would be up there."

The 6-foot-6, 303-pound Williams was a force for the Crimson Tide last season as a nearly unblockable D-lineman who has an intriguing combination of quickness, power and strong hands.

Williams wasn't a starter before last season, but went on to win the Outland Trophy as college football's best interior lineman. He had eight sacks last season for Alabama, and 19½ tackles for loss — causing many scouts to compare him to Los Angeles Rams All-Pro Aaron Donald.

He is Alabama's highest drafted defensive player since linebacker Cornelius Bennett went No. 2 overall in 1987.

"I knew something like this was possible, but not this fast," the 21-year-old Williams said. "It happened very fast, but I'm enjoying every moment, man, every little bit of it."

This marks the third straight year the Jets have seen a highly touted player who many considered the best available "fall" to them. It happened last year when they took quarterback Sam Darnold at No. 3 overall and safety Jamal Adams at No. 6 in 2017.

There has been some speculation that the Jets could look to deal Leonard Williams, who is entering a contract year, but Maccagnan appeared to quash that talk.

"We like Leonard quite a bit," Maccagnan said. "We actually like the idea of putting all these guys on the field at the same time. We have the ability to, I think in our minds, have a very, very strong defensive front and I'm really excited to see how Gregg Williams can use all those players."

Maccagnan envisions Quinnen Williams being able to complement Leonard Williams by strengthening the middle of the defensive line and taking some pressure off the veteran. There's also the potential to use the youngster some at nose tackle, at defensive tackle and perhaps even on the end.

And, Quinnen Williams is game — and extremely confident.

"It is very similar to the things they did at Alabama, but whatever they want me to do, whatever I need to learn, I'm coming up and learning because I'm a great learner and I can do it all," he said. "I can play all five positions, so it doesn't matter where they put me at or where they place me, I'm going to be able to do it all."

The Jets have selected third overall in the NFL draft just twice previously since the 1970 merger, including last year when they traded up to get Darnold.

The other time: 1981, when they took running back Freeman McNeil, the franchise's second-leading rusher.

The Jets are hoping Williams will be a big-time hit, too, and make his impact felt on opposing quarterbacks and running backs.

NOTES: The Jets have no second-round selections and don't pick again until the third round (No. 68 overall), but Maccagnan wouldn't rule out trading into the second. "I think we'll probably look into it," he said. "It really depends on how the board unfolds." ... Among the positions the Jets could target Friday night and Saturday: outside linebacker, cornerback, wide receiver and offensive line.