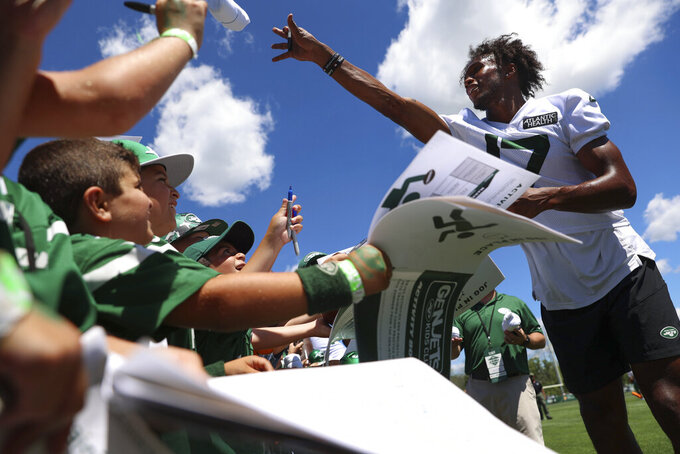 FLORHAM PARK, N.J. (AP) — Sauce Gardner was relaxing on the plane ride from the NFL draft in Las Vegas to his new playing home in New Jersey when the magnitude of what was happening really started to sink in.

The former Cincinnati cornerback was the No. 4 overall pick by the New York Jets. And sitting there with him were wide receiver Garrett Wilson, the 10th overall selection out of Ohio State, and Jermaine Johnson, who went 26th out of Florida State.

They were a trio of friends and first-rounders — on their way to help turn around the fortunes of a frustrated franchise.

“We were really like, it was meant for all of us to be on the same team,” Gardner said Saturday.

Gardner and Johnson trained together in Texas leading up to the draft in April, along with eventual Jets selections Breece Hall (second round) and Micheal Clemons (fourth round), among others.

"For us to all end up on the same team is like a blessing," Gardner said. “I don't think I'm just like a good luck charm, but it's like every team I end up on, there's always something unique about it.”

Like his Bearcats team that made it to the College Football Playoff last season for the first time in school history before losing to Alabama in the Cotton Bowl.

“This program, it reminds me of Cincinnati a lot," Gardner said. "And I think this year, we're going to make a huge change.”

The Jets and their fans are counting on it.

New York has gone 11 seasons without making the playoffs, the longest active postseason drought in the league. The Jets are coming off a 4-13 campaign, the first under coach Robert Saleh, but their impressive draft haul had the organization giddy.

It marked just the second time in franchise history during the modern draft era — since 1970 — the Jets had more than two picks in the opening round and first since they had a record four selections in 2000.

Six picks after general manager Joe Douglas took Gardner to fill a massive need in the secondary, he gave quarterback Zach Wilson an explosive playmaker in Garrett Wilson. He wasn't done, though, swinging a deal with Tennessee to get back into the first round to take Johnson to boost the pass rush.

Now all three players will be bonded forever — by high hopes that their Jets legacy will be marked by lots of winning.

“I know none of us have an issue with those expectations,” Johnson said.

There's a certain swagger with which all three carry themselves. Gardner's diamond-encrusted “SAUCE” medallion on draft night was a clear display of that. Their confidence on the field belies their rookie status.

“We all have the same mindset of just being the best teammates we can,” Johnson said. "You know, we’re rookies, so we've got to earn our keep, especially to earn it to have a voice on this team. And that comes with doing things the right way, going 110% and being a good teammate.

“So, I mean, we’re all on that track and we’ll see what happens.”

So far, so good through four camp practices.

Gardner has been solid while rotating with Bryce Hall in the competition for a starting spot opposite D.J. Reed.

“I mean, that boy's a dog, he's really a dog,” said Garrett Wilson, who has matched up against Gardner several times this summer. “He's really handsy, good with his hands, and puts himself in the right scenario a lot of the time."

Wilson has been one of the early standouts on offense, making several impressive catches and building quick chemistry with his quarterback.

Johnson is working in a rotation on the Jets' deepest and arguably best unit, a defensive line that includes seasoned veterans such as Quinnen Williams, Carl Lawson and John Franklin-Myers and youngsters such as Johnson, who had 12 sacks last season and was the ACC defensive player of the year.

It's still just practice, of course. And there are still a few weeks before even the first preseason game.

But Gardner, Wilson and Johnson have been passing the early tests — while leaning on each other as fellow first-rounders.

“It takes a lot of pressure off because you have people to talk to that are going through the same things you’re going through, the same expectations,” Wilson said. "When you’re a first-round pick, you’re expected to come in and make an impact right away.

"I feel like we’ve been holding each other to high standards. But also we know that this is all new to each of us and we’re able to bounce things off of each other, talk to each other. And it’s been really good, for sure.”