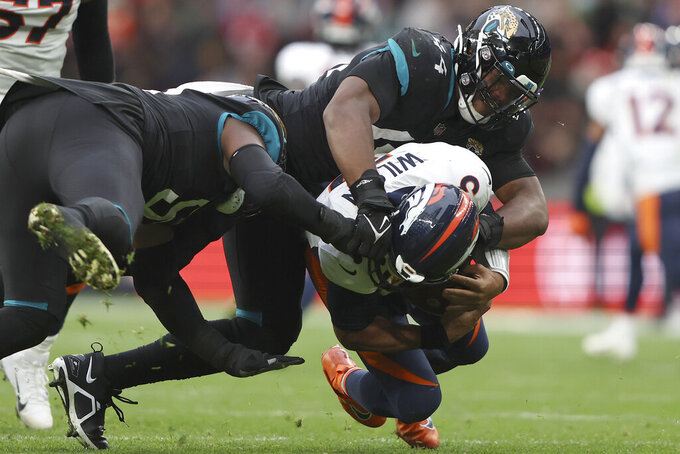 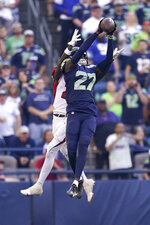 Sauce Gardner got twisted around as Stefon Diggs blew by him, a rare moment this season when the New York Jets cornerback looked like a rookie.

That 42-yard toss by Josh Allen on the first play from scrimmage Sunday had the No. 4 overall draft pick burned. But Gardner's confidence never wavered.

“After that play, I just told everybody, ‘Chill out, we’re going to be good,'" Gardner recalled. “And right after that, the interception happened.”

Jordan Whitehead picked off Allen two plays later. And then Gardner got back to playing like a veteran, adding an interception of his own, not allowing another catch in man coverage the rest of the game and making the defensive play that sealed the Jets' 20-17 victory over Buffalo by batting away Allen's desperation heave to Gabe Davis.

“He got beat on that first play on that double move, but he still stayed poised and kept himself in the game,” Jets coach Robert Saleh said. “He wasn’t even fazed by it.”

That has been the theme so far through the first half of the season for the former Cincinnati star, who is already considered one of the NFL's top cornerbacks. Gardner is also the frontrunner for AP Defensive Rookie of the Year, according to FanDuel Sportsbook.

He has been a big reason for the Jets' surprising 6-3 start, and he's not alone. Wide receiver Garrett Wilson and defensive end Jermaine Johnson, both first-rounders along with Gardner, and second-round running back Breece Hall — now out for the season with a torn ACL — have also been key contributors.

“When you have that vibrant youth, they just bring a lot of juice,” Saleh said. “It’s contagious, everybody gets it.”

Same in Seattle, where the Seahawks are also 6-3 and on a four-game winning streak led by a resurgent Geno Smith at quarterback and a pair of standout rookies in running back Kenneth Walker III and cornerback Tariq Woolen.

Walker has stepped in for injured Rashaad Penny and — with Hall on IR — run his way to being the favorite for AP Offensive Rookie of the Year, according to FanDuel Sportsbook.

The second-round pick out of Michigan State has 570 yards rushing and seven touchdowns, with the bulk of his production coming in the last four games since taking over as the Seahawks' starter.

“He’s something now,” Seattle coach Pete Carroll said. “He’s showing us stuff every time we go out. He’s got tricks, he’s got creativity. It stems from this marvelous ability he has and capitalizes on it because he’s so tough and he’s so aggressive."

Several teams can relate, with rookies all around the league making immediate impacts:

IKEM EKWONU, LT, Panthers — The sixth overall pick has given up three sacks, but has settled in lately by allowing just five quarterback pressures in his last six games.

SAUCE GARDNER, CB, Jets — New York believes it might have the second coming of Darrelle Revis in Gardner, who has been impressive through the first half and has Pro Football Focus' second-best coverage grade.

AIDAN HUTCHINSON, DE, Lions — He went No. 2 overall and is quickly establishing himself as Detroit's top pass rusher with 4 1/2 sacks and a team-leading 24 quarterback pressures. Hutchinson also got his first interception last Sunday when he picked off Green Bay's Aaron Rodgers in the end zone.

JACK JONES, CB, Patriots — The fourth-rounder out of Arizona State is part of New England's defensive back rotation and is Pro Football Focus' top-graded cornerback despite starting just one game. Jones is also standing out on special teams, coming close to tipping a few kicks on the field goal block unit.

ROGER McCREARY, CB, Titans — A year after Tennessee took Caleb Farley in the first round, the Titans drafted another cornerback in the second and had some scratching their heads. While Farley has struggled to get on the field on defense, McCreary, the 35th overall pick out of Auburn, has been a starter all season and intercepted Kansas City's Patrick Mahomes last Sunday night.

CHRIS OLAVE, WR, Saints — The No. 11 pick was the third wide receiver drafted, but leads all rookies with 43 catches and 618 yards receiving to go along with two TDs.

DAMEON PIERCE, RB, Texans — The fourth-round pick out of Florida has become a key playmaker for Houston, running for at least 92 yards in four of his last five games and leading NFL rookies with 678 yards rushing. He and Seattle's Walker could end up in a tight race for offensive rookie honors.

KENNETH WALKER III, RB, Seahawks — He has a five-game touchdown streak, including running for two scores in two of his last three games. Against Arizona last Sunday, Walker had 78 of his 109 yards rushing in the second half — including 62 on Seattle's final two possessions.

TRAVON WALKER, OLB, Jaguars — The No. 1 overall pick from Georgia has 2 1/2 sacks and five quarterback hits while also showing flashes of the run-stuffing ability that made him fly up draft boards in the spring. He and fellow first-round linebacker Devin Lloyd are big-time building blocks for Jacksonville's defense.

GARRETT WILSON, WR, Jets — He was the second wide receiver drafted at No. 10 overall, two picks after Atlanta's Drake London, but Wilson has developed a quick rapport with quarterback Zach Wilson. The former Ohio State standout has 18 of his team-leading 42 receptions in the past three games.

TARIQ WOOLEN, CB, Seahawks — The fifth-round pick out of UTSA has been a pleasant surprise, winning the starting job out of training camp and consistently showing good coverage skills and tackling ability. Woolen's four interceptions are tied for second-most in the league.