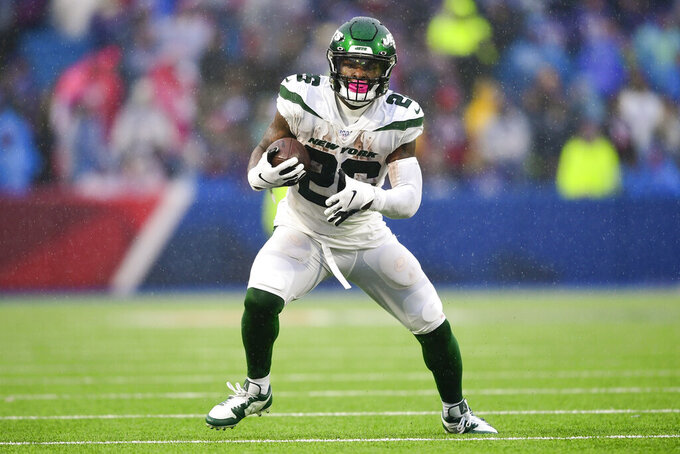 File-This Dec. 29, 2019, file photo shows New York Jets running back Le'Veon Bell (26) during the first half of an NFL football game against the Buffalo Bills in Orchard Park, N.Y. The New York Jets have surprisingly released Bell, ending a disappointing tenure after less than two full seasons. The team issued a statement from general manager Joe Douglas on Tuesday, Oct. 13, 2020, in which he says the Jets made the move after having several conversations with Bell and his agent during the last few days and exploring trade options. (AP Photo/David Dermer, File)

NEW YORK (AP) — The New York Jets' decision to move on from Le'Veon Bell was a stunner. For a while now, though, it appeared inevitable.

The star running back never seemed to truly mesh with Adam Gase or his offense during the past season-plus. And Bell made it clear he wasn't thrilled with his role.

So, his sudden release Tuesday night wasn't completely a surprise — although the timing was. Rather than the Jets waiting to try to trade him at the deadline in three weeks, they instead decided to cut ties now with a player for whom there were such high hopes.

“That was kind of the consensus we came to last night,” Gase said Wednesday. “Spoke with him and for us, we just felt like it was best that we part ways.”

Bell was not seen as a long-term part of the Jets' future, even though he signed a four-year, $52 million deal with the team last offseason. He was likely to be a salary cap cut next offseason, so New York tried to find a trade partner. The Jets also gave Bell and his agent permission to explore trades on their ends, but there were no takers.

Bell’s $8 million injury guarantee for 2021 was a hinderance for some, even with the Jets willing to pick up some of the $6 million remaining on his guaranteed base salary for this year. So, Bell is now a free agent and can sign with any other team after 4 p.m. Wednesday.

"For us, I want nothing but the best for him and he gets an opportunity to go somewhere else and have success," Gase said. “It's tough. It's a tough decision to make, but we felt like that was the best for us with where we're at right now.”

The Jets are 0-5 for the first time since 1996, and will head to Miami to take on the AFC East-rival Dolphins on Sunday. Gase remains squarely on the hot seat, and this move will only further alienate the coach from the frustrated fanbase — which blames him for the team's struggles on the field and its inability to keep star players happy.

Bell twice used social media this season to express unhappiness about how he was being used. The latest came last Sunday after he returned from missing three games with a hamstring injury. He “liked” a few social media posts that criticized Gase's use of Bell in the passing game — he caught just one pass on his only target — and another that suggested the Jets trade him.

“For whatever reason, it didn't work out,” Gase said. “Our team moving forward to Miami, that's our No. 1 concern right now.”

When asked whether he agreed with the perception of some that he misused Bell, Gase said only: “It's irrelevant at this point.”

In the offseason, Gase insisted he would try to figure out how to maximize Bell's skills in the offense this season. That never materialized, and mostly because the running back wasn't on the field much.

“Yeah, I mean, the first game he played a half and got injured, and then he played this last game,” Gase said. “So, it is what it is and it's the decision we made, and we've moved on to this one.”

Bell's now-former Jets teammates expressed surprise at the move, while also saying it's just part of the business of the NFL.

“To be honest, I was kind of shocked,” wide receiver Breshad Perriman said. “I never thought anything like that was coming. But Le’Veon was a great teammate. And I hope wherever he lands, he balls out.”

Added quarterback Sam Darnold: “He’s a good player and obviously we’re going to miss him. It definitely hurts us in some ways.”

With Bell gone, rookie La'Mical Perine will likely see an increased role in the offense and likely get most of the carries over 37-year-old Frank Gore. The Jets also have Ty Johnson on the active roster and Josh Adams on the practice squad.

“Perine's definitely going to get bigger role,” Gase said. “Frank, you’re not going to lean on him because of where he’s at in his career. Getting Perine involved is going to be critical.”

NOTES: Gase considered handing off play-calling duties on offense, but decided against it after speaking to GM Joe Douglas and his staff earlier this week. “Nobody thought that was the reason why it’s going the way it’s going,” Gase said. ... The Jets signed DL Tanzel Smart and K/P Sergio Castillo to the practice squad. They also released WR Donte Moncrief from the practice squad.