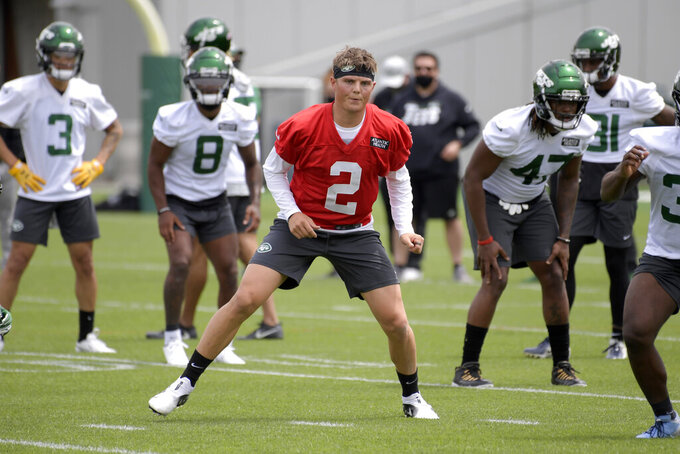 FILE - New York Jets first round draft pick Zach Wilson works out during NFL rookie camp in Florham Park, N.J., in this Friday, May 7, 2021, file photo. The New York Jets and quarterback Zach Wilson have agreed to terms on his four-year rookie contract, according to a person with direct knowledge of the deal. Wilson, the No. 2 overall pick in the NFL draft in April, missed the first two days of training camp practices while the two sides hammered out details. (AP Photo/Bill Kostroun, File)

The deal for Wilson, the No. 2 overall pick in the NFL draft in April, includes a signing bonus of $22.9 million, and has a fifth-year team option.

New York posted a picture on Twitter of a smiling Wilson signing his deal, with the words “Let the fun begin” accompanying it. Wilson also sent a video message to fans — who'll be in attendance at practice Saturday — through the Jets' Twitter page.

Offset language in the contract was among the issues that caused a hang-up. That practice, shared by most NFL teams, provides clubs with financial protection if they release the player before the end of a contract. The payout timing of Wilson’s signing bonus was another sticking point.

NFL Network and ESPN reported the sides compromised with Wilson receiving his entire signing bonus within 15 days — instead of after this season — and the team keeping its offset language in the contract.

Wilson was the last of this year’s first-rounders to get his deal after San Francisco signed quarterback Trey Lance, the No. 3 overall pick, on Wednesday.

"You're not going to see me panic," he said after practice Thursday. "Like I've said, there are 89 guys that are counting on us to prepare them the best way we know how. And right now, they've got our full attention.

"Zach's going to sign. And when it happens is when it happens. I don't try to worry about things I have no control over. So when it gets done, it'll be awesome to get him back."

About 30 minutes later, the agreement was hammered out. So Wilson should be on the field for New York's next practice Friday.

Fans who were starting to fret about the quarterback not yet signing took to social media to express relief. Even offensive lineman Greg Van Roten tweeted a gif of WWE wrestler Daniel Bryan doing his familiar “Yes! Yes! Yes!” chant.

Wilson is expected to start the season opener at Carolina on Sept. 12 for the Jets, who moved on from Sam Darnold in the offseason by trading him to Carolina a few weeks before the draft. Saleh and general manager Joe Douglas zeroed in on Wilson after being thoroughly impressed by the former BYU star at his pro day.

Wilson became the Jets’ highest-drafted quarterback since Joe Namath went No. 1 overall in the 1965 AFL draft. New York has been looking for a consistently successful franchise quarterback since Namath’s last game for the Jets in 1976, and the team is hoping Wilson can be that player.

Wilson made some terrific plays during offseason workouts, organized team activities and minicamp, but was also shaky at times — as expected for a quarterback getting a crash course in life as an NFL rookie. He also quickly gained a reputation for wanting to fully understand offensive coordinator Mike LaFleur’s playbook, often putting in extra work at the facility during the offseason and watching lots of film.

“I look back in college, you’re running the same offense for three years, so you know it like the back of your hand,” Wilson said last month. “Out here, you’re always just a step slow at first. It’s just how fast can I get through my progressions to where I don’t even have to think about it? If something’s covered, I instantly know how to move on. I think that’s the key and that’s what I’ve gotten better with.”

Saleh said he last spoke to Wilson earlier this week, but added that LaFleur has regularly been texting with the quarterback about the playbook and installation of plays.

“We'll be excited when he gets here,” Saleh said before smiling. “And it'll be good to not have to answer questions about it.”