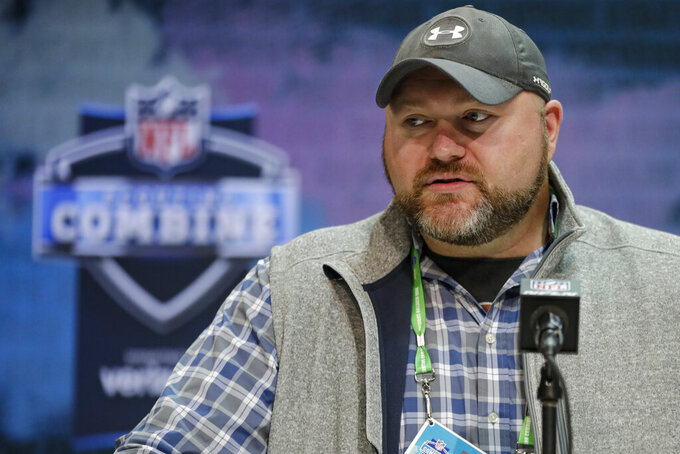 FILE - In this Feb. 25, 2020, file photo, New York Jets general manager Joe Douglas speaks during a news conference at the NFL football scouting combine in Indianapolis. Douglas made a vow to Sam Darnold's parents when he met them before the Jets' preseason opener last summer. The new general manager assured Mike and Chris Darnold they weren't going to have to worry about their son with him in charge. (AP Photo/Michael Conroy, File)

NEW YORK (AP) — Joe Douglas made a vow to Sam Darnold's parents when he met them before the New York Jets' preseason opener last summer.

The new general manager assured Mike and Chris Darnold they weren't going to have to worry about their son with him in charge.

“I promised I was going to do everything in my power to take care of Sam with protection and playmakers,” Douglas recalled during a conference call Wednesday. “I think we still have a lot to do in both those regards moving forward. I think we've done our best to attack some of the issues we had in the past.”

Douglas is overseeing his first full offseason with the Jets after taking over last June for the abruptly fired Mike Maccagnan. Since Maccagnan's ouster came after free agency and the draft, only now is Douglas able to truly start shaping the roster the way he wants. He acknowledged New York had “a lot of holes to fill” and called the team's approach in free agency “strategic and disciplined.”

Douglas made it clear that, through it all, the priority was the quarterback.

“That's our focus, is doing everything we can to help Sam succeed,” Douglas said. “The one thing we didn't want, we just didn't want a situation where Sam was just going to have to be under fire all the time with protection issues.”

Douglas hinted that New York might not yet be done with the offensive line, particularly with the draft later this month.

“I think there's a real shortage of quality offensive linemen in the National Football League," he said, "so we’re going to try to do our best to get as many quality ones as we can because you can never have too many. We're going to try to keep it simple with guys that are smart, tough and versatile.”

Right guard Brian Winters could be the only starter from Week 1 of last season to return. There was some speculation Winters could be a salary cap cut because he's due to cost $7.28 million this season. But Douglas said the Jets love Winters' toughness and added that he expects there will be “really good competition” all along the line.

As for the playmakers, the Jets lost one of their best when wide receiver Robby Anderson signed with Carolina. But, the Jets were able to find a potential replacement in the speedy Breshad Perriman, who signed a one-year deal worth $8 million and includes $6 million guaranteed. The team officially announced his signing Wednesday.

“I feel like he can come in here and make an impact,” Douglas said.

Douglas acknowledged the Jets did their due diligence on the big-name wide receivers who were traded this offseason, including DeAndre Hopkins and Stefon Diggs, but wouldn't go into specifics. New York could also target a receiver with the No. 11 overall pick or perhaps in the early rounds.

CLOWN SHOW: One of New York's other big needs is a true pass rusher, a player who can wreck opposing offenses. The Jets re-signed outside linebacker Jordan Jenkins, their sacks leader last season. But, Jadeveon Clowney remains available - and an intriguing possibility, at least for Jets fans. “We're going to do our due diligence on everybody that's out there, especially at the edge-rushing position," Douglas said, declining to go into specifics on Clowney.

INJURIES: Douglas said linebacker C.J. Mosley is “progressing well” from the groin/core muscle injury that sidelined him for all but two games last season.

He didn't sound as nearly optimistic about wide receiver Quincy Enunwa, who's trying to come back from a second serious neck injury in three years. “We're still going through the process with Quincy,” Douglas said. "We should have some more information on that hopefully soon. Obviously, that’s a big question mark for us moving forward.”

SMART SPENDING: Of the 14 free-agent deals the Jets have agreed to or signed, 10 are for just one year. Even a few of the multi-year deals are structured so that New York could easily get out from under them if it chooses without much financial penalty. That's all part of the plan for Douglas, who could have lots of room under the salary cap to work with next offseason.

“The market dictated a lot of those one-year deals,” the GM said. “It does give us great flexibility. Obviously, the market wasn't ideal for a lot of players and agents early, so we were able to come to an agreement on a lot of one-year deals. We have the flexibility to try to extend those guys through the season."