Jets' Herndon back from suspension, but has hamstring injury 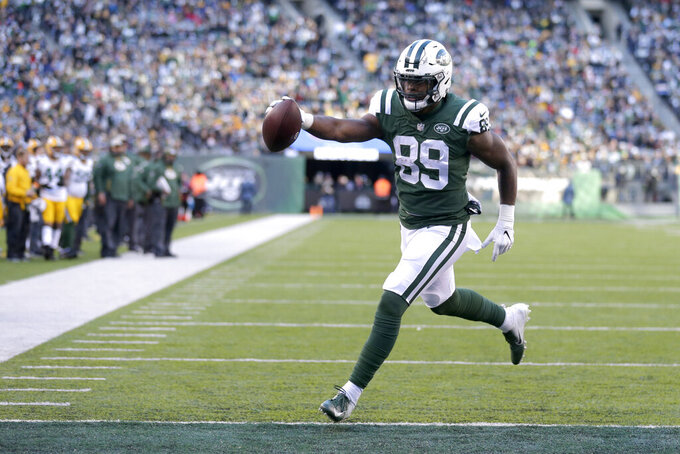 FILE - In this Dec. 23, 2018 file photo, New York Jets tight end Chris Herndon scores on a touchdown pass form quarterback Sam Darnold, not visible, during the second half of an NFL football game against the Green Bay Packers, in East Rutherford, N.J. Herndon has a hamstring injury that will sideline him for an undetermined amount of time. Coach Adam Gase says Wednesday, Oct. 9, 2019, the second-year tight end was injured last Friday while running routes on his own.(AP Photo/Seth Wenig, File)

The team expected to have its second-year tight end back in the mix this week after Herndon was suspended the first four games by the NFL for violating the league's substance- abuse policy. But his return is now on hold after he injured a hamstring that could keep him sidelined a while.

"It's severe enough that he won't be practicing today," coach Adam Gase said Wednesday. "We'll see if we can get him back toward the end of the week.

"It's a legit hamstring."

Gase said Herndon was injured Friday while running routes on his own, preparing to return to practice this week with his teammates. Now, Herndon appears unlikely to play against Dallas on Sunday. He sat out practice Wednesday and Gase characterized the injury as a "week-to-week" situation.

"It's not ideal," Gase said. "I feel bad for him just because he's been waiting to get back and for that to happen. I know the guys were looking forward to him getting back, too."

It's a tough blow for the Jets' struggling offense, which is getting quarterback Sam Darnold back this week from a bout with mononucleosis that sidelined him for three games. New York struggled to score or move the ball consistently in Darnold's absence, and the feeling was that having Herndon — who was able to sit in on meetings during his suspension — back would be a big boost.

Herndon and Darnold established a nice rapport late last season as rookies, with the tight end catching 39 passes for 502 yards and four touchdowns.

Herndon was suspended in July without pay by the NFL for the first four regular-season games after he pleaded guilty in January to driving while intoxicated in New Jersey in June 2018. The incident occurred about a month after he was selected by the Jets in the fourth round of the NFL draft out of Miami.

The news on Herndon is just the latest in what has been a tough past several weeks for the Jets. After Darnold became ill, backup Trevor Siemian suffered a season-ending ankle injury in his first game as the replacement, causing Gase to promote Luke Falk from the practice squad to make two starts.

Wide receiver Quincy Enunwa suffered a neck injury, his second in three years, during the season opener against Buffalo and is out for the season.

Gase acknowledged that Mosley's injury was "a little more severe than any of us felt or he felt," and the linebacker continues to be sidelined. Mosley didn't practice Wednesday and the coach called his availability for the game against the Cowboys "doubtful, at best."

"We're on the back end of this thing," Gase said. "We're close. It's been a long time. We've sent him everywhere and gone through the steps we need to go through and we have a good plan to get him back sooner than later. It was a little longer than any of us thought."