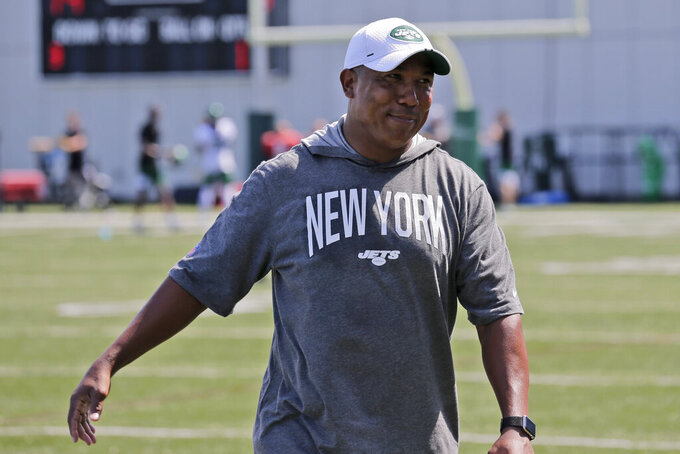 FILE - In this July 25, 2019, file photo, New York Jets coach Hines Ward comes off the field after a practice at the NFL football team's training camp in Florham Park, N.J. The New York Jets have hired former Pittsburgh Steelers wide receiver Hines Ward as a full-time offensive assistant. Ward worked with the Jets during the summer as a coaching intern and impressed coach Adam Gase and his staff. (AP Photo/Seth Wenig, File)

Ward worked with the Jets during the summer as a coaching intern and impressed coach Adam Gase and his staff. Wide receiver Robby Anderson praised Ward during camp for helping him try to find ways to improve his game this season.

Jets general manager Joe Douglas had been interested in having Ward join the Eagles' staff and reached out to the former wide receiver when he was hired by the Jets in June. Ward will work closely again with wide receivers coach Shawn Jefferson.

"That's a great addition for us," Gase said. "He's done a lot of really good things with that group, helping out with those guys and it was the right time for him. He's excited about the opportunity."

The 43-year-old Ward is the Steelers' career leader with 1,000 catches, 12,083 yards receiving and 85 touchdown catches. He played 15 seasons for Pittsburgh, and helped the franchise win two Super Bowl titles. Ward also worked as a coaching intern for the Steelers during training camp in 2017.