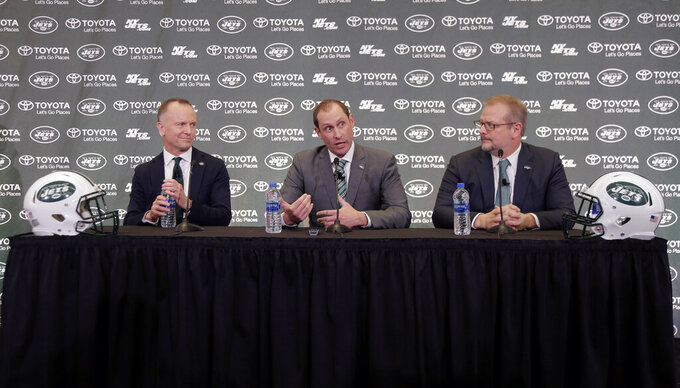 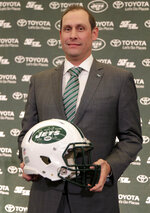 FLORHAM PARK, N.J. (AP) — In the hours that followed the New York Jets' announcement last Friday that Adam Gase is their new head coach, many frustrated fans took to social media to voice their displeasure.

Some used all 280 characters on Twitter. Some only needed one word and a hashtag.

Either way, they weren't happy.

Christopher Johnson and the Jets, however, were thrilled with their decision. And shortly after formally introducing Gase at the team's facility Monday, Johnson sacked the pointed criticism with overwhelming optimism.

"We've just had a couple of down years, so I have to earn their trust," the team's chairman and CEO said. "I think that they will see this as, if not right now, they'll see it pretty soon as a great hire.

Gase beat out the likes of Mike McCarthy, Todd Monken and Matt Rhule for the job, less than two weeks after being fired by the Miami Dolphins.

"I'm just really convinced that he is the man," Johnson said.

Johnson praised Gase's work over the years with quarterbacks and offenses, and how the Jets' Sam Darnold — along with the rest of the offense — will benefit greatly from the new coach being here.

"To paraphrase Wayne Gretzky," Johnson said, "he's coaching to where football is going."

The 40-year-old Gase was the hot assistant just three years ago as the Chicago Bears' offensive coordinator after directing the Denver Broncos' Peyton Manning-led offense to record-setting performances in 2013 and 2014. But a 23-26 record in three seasons with the Dolphins, including a playoff loss, had him out of a job — along with reports of some friction with players.

Gase quickly got a second chance, with a former AFC East opponent.

"Over three years, you're going to have mistakes that you make," Gase said with his wife Jennifer and their three young children sitting a few feet away from the podium. "It can be either a mental note or, really, you start creating that list from year to year. It's really starting with this first part of the process."

That would be putting together a coaching staff, which is something he has been working on since he was hired.

And, Gase will have total control of the hirings — contrary to reports that the Jets were telling candidates they wanted to have final say over assistants.

"No, that never happened," Johnson said. "I completely deny it."

The Jets haven't made the playoffs since the 2010 season, an eight-year drought that feels like a lifetime to some fans. Johnson made it clear he wants to win, and soon.

"My expectations for this team under Adam are very high," Johnson said. "In short, I chose him to win."

That doesn't mean the owner is putting a playoff mandate on Gase, general manager Mike Maccagnan and the rest of the organization.

"Absolutely not," Johnson said. "I will never do that."

This isn't like the days of Rex Ryan, who blew into his first news conference in 2009 with bold talk of meeting the president and winning the Super Bowl.

Gase's introduction was a low-key affair with no boasts or promises. In fact the only real buzz came on social media from fans who were mesmerized by the new coach's intense eyes throughout the news conference.

Gase won't have roster control as he did with the Dolphins, and that's no issue.

"That's not something I was really interested in," Gase said. "That's just kind of how it worked out in Miami.... I knew coming in here it would be a team effort. I can do my part, which is coaching the team."

Many of the fans who were frustrated with the hire have pointed to Gase's mediocre record in Miami — without the resume of a Super Bowl-winning coach such as McCarthy.

"We're going to look to go better than .500," Gase said. "We're going to work to do that. That's part of this process. Right now, we're 0-0. ... It's a fresh start for everybody. I think there's a lot of good pieces in place. I think we're going to have a lot of opportunities to add to this."

It all starts with Darnold, of course. The No. 3 overall draft pick had an up-and-down rookie season, but finished strong after coming back from a foot injury that sidelined him for three games.

The two spoke via FaceTime during the hiring process and hit it off, and now could be linked together for years to come.

"I like his fire," Gase said of Darnold. "You could see it the way he plays and just when you talk to him, you could see there's a love for football."

Gase acknowledged he could go without a quarterbacks coach and rather he and the offensive coordinator will work directly with Darnold and the team's other QBs.

"I think the less voices there, the better," Gase said. "I think there needs to be a direct line of communication with myself or if we bring in just a coordinator."

Gase is also still mulling his options at defensive coordinator, and wouldn't confirm or deny that Gregg Williams is a leading candidate for the spot. Gase indicated he would focus mainly on the offense and leave the defense primarily to whomever he hires.

"I'm pretty sure that everyone is in the same boat that I need to spend my time with the quarterback," he said.

"Whoever we bring here on the defense has to do a great job of making sure that he's really the head coach of the defense. That's what we're looking for."