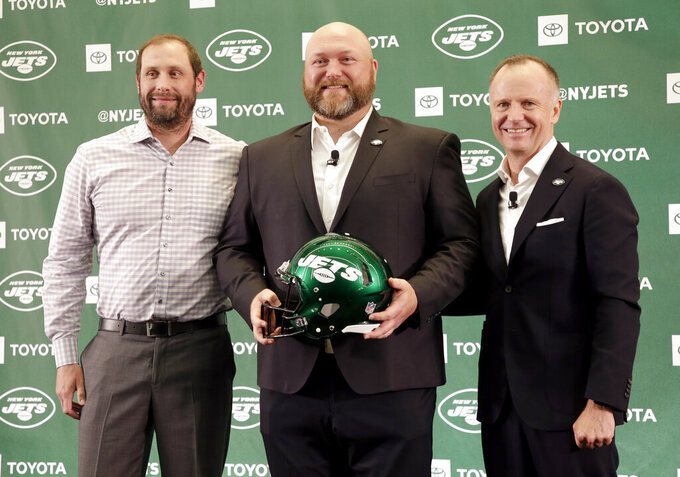 FILE - In this June 11, 2019, file photo, New New York Jets general manager Joe Douglas, center, poses for a picture with head coach Adam Gase, left, and Jets chairman and CEO Christopher Johnson during a news conference at the team's NFL football training facility in Florham Park, N.J. Johnson says Gase's job is safe and he will remain the coach next season despite the team's struggles this year. Johnson held a brief meeting with reporters and says Gase has his trust as well as the trust of general manager Joe Douglas moving forward. (AP Photo/Seth Wenig, File)

Not just this season. But, next season, too.

Team chairman and CEO Christopher Johnson announced Wednesday that Gase's job is safe and he will remain the coach in 2020 despite the team's 2-7 record. Johnson cited Gase’s positive work with quarterback Sam Darnold and collaborative efforts with general manager Joe Douglas to try to improve the struggling franchise.

“I want to assure you, there will be no changes in coaches,” Johnson said during a brief meeting with reporters during practice. “Adam has the trust of this team, he has the trust of Sam, he has Joe’s trust, he has my trust. He’s a good man, a good coach. I brought in Joe earlier this year — he hasn’t been here very long — to help build the team with Adam. There’s a lot of work to do. There’s a great deal of work to do. Everyone understands that. And we’re just getting started.

“But I feel really good about this team moving forward.”

Johnson told the entire team of his decision last Wednesday, and it was met with a positive response from players and coaches.

Now public, the news might further frustrate some fans who were already calling for Gase’s job despite him being just nine games into his tenure with the Jets. Fans have flocked to social media and sports talk radio to voice their displeasure with the team and Gase, in particular. One group even paid for a plane to tote a banner over Manhattan last week with the simple message: “Fire Adam Gase Now.”

Instead, Johnson was in the unique position of defending his coach midway through his first season with the team — and giving a vote of confidence that extends to next year.

“I think that speaks very highly of the character of this team and the effort of the coaches.”

Gase replaced the fired Todd Bowles last January, and Douglas was hired to replace Mike Maccagnan as GM in June.

The two have had to navigate some difficult moments this season, including injuries to several key players that have contributed to the offense — Gase’s specialty — to rank as the worst in the league so far. Johnson believes that has negatively affected Darnold, who has seven touchdown passes and nine interceptions this season. Darnold also missed three games with mononucleosis.

Starting right guard Brian Winters is out for the year with a dislocated shoulder, left guard Kelechi Osemele had a shoulder injury that ended in him being cut and filing a grievance against the team, and center Ryan Kalil is dealing with a knee injury.

“We’ve had a lot of adversity,” Johnson said. “Sam hasn’t been given the best opportunity to thrive. We’ve had so many moving parts on the offensive line that I think it’s affected his ability to play as he would like.”

Johnson insisted Gase is the right coach to bring Darnold along and help him continue to progress in his second season and beyond. That’s a major factor in Johnson believing it is the correct call to have Gase stay.

“Seeing him work with Sam, just as a small portion of this question, gives me a lot of confidence in that,” Johnson said. “Seeing him work with Joe is a whole new dynamic in this building, it’s a really positive dynamic. They have the same vision for this team going forward. There are a number of reasons, but those are two really big ones that I feel confident in Adam as our coach going forward.”

Johnson also addressed the recent squabble involving star safety Jamal Adams and Douglas and Gase, when Adams was “hurt” the Jets entertained trade offers involving him at the NFL’s deadline for deals.

“He’s an extraordinary player,” Johnson said. “He’s the kind of player you can build around, you should build around, given the chance. He’s absolutely amazing. I would love to have him on the team for the rest of his career. I would truly love that.”

Johnson added that the ultimate decision on Adams — and the rest of the roster — will be up to Douglas.

But moving forward, Johnson feels confident he has the right combination of people in Gase and Douglas to help the franchise turn things around.

“I hate to lose,” Johnson said. “Every player on this team hates to lose. You talk about Jamal — he’s never been on a team that lost. He’s like a lot of these guys, they’ve been superstars their whole lives. Losing is a whole new thing and it’s terrible and I want it to stay terrible. Who wants to get used to that?

“But I can assure you that this entire building is about getting this team to a better place.”