Jets LB Jarrad Davis out about 2 months with ankle injury 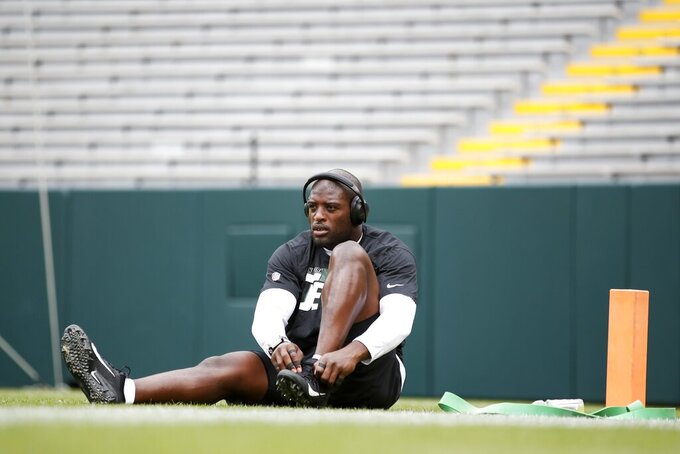 Linebacker Jarrad Davis will be sidelined through the first several weeks of the regular season after hurting his left ankle during the team's preseason game in Green Bay on Saturday.

Jets coach Robert Saleh said Monday that Davis’ injury will keep him out until around the team's bye week in mid-October. New York will evaluate whether the linebacker will be placed on injured reserve with a chance to return. If he returns after the bye, he will have missed five games.

Davis was hurt when another player rolled onto his left ankle during the second quarter of the Jets' preseason victory. He walked gingerly to the blue medical tent on the sideline, but was then taken to the locker room on a cart.

Saleh was vague when asked about the nature of Davis' injury, specifically whether it's to his upper ankle.

“It is an ankle, but not necessarily a high-ankle sprain," Saleh said. "But it's enough that it'll be treated like one.”

Davis' injury is another big blow to the Jets' defense, which lost defensive end Carl Lawson for the season with a ruptured Achilles tendon during practice with the Packers last Thursday. Both Davis and Lawson were New York's two big free agent signings on the defensive side during the offseason — and they were both having excellent training camps.

“I never feel sorry for myself; I feel terrible for the two that are injured,” Saleh said. “Jarrad has been nothing but a professional since he first walked in here. Same thing with Carl. The amount of work that they put in, how much they've studied and how much they've bought in to our scheme and the way we're trying to get things done, and for them to lose part of their season and in Carl's case, all of his season, I mean, I feel sick for them.”

The 26-year-old Davis spent his first four NFL seasons with Detroit after being a first-round pick out of Florida in 2017. He saw his role diminish from starter to backup in recent seasons and revealed earlier this summer that he considered walking away from playing football. Davis was excited about the opportunity in New York, saying it revitalized him.

Saleh said Jamien Sherwood would replace Davis at inside linebacker next to veteran C.J. Mosley. Sherwood was a fifth-round pick out of Auburn, who has converted to linebacker from safety and is having a solid summer.

Saleh compared Sherwood's situation to that of 49ers linebacker Fred Warner, who played nickel back in college at BYU before transitioning to linebacker in the NFL.

“Sherwood has a tremendous mindset to him,” Saleh said. “He's extremely smart, he's got great command of the playbook already. He's got the respect of his peers, he's an unbelievable communicator.”

In other injuries, backup quarterback Mike White (ribs) and defensive lineman Ronald Blair (hamstring) are day to day after being hurt in Green Bay.

Backup offensive tackle Conor McDermott is continuing to be evaluated for a knee injury after being carted off the field against the Packers.

“It's going to be through the season with his injury,” Saleh said. “He's looking at some more evaluations to see which direction he wants to go.”

Saleh said the team is hoping to get left guard Alijah Vera-Tucker (pectoral) and wide receiver Elijah Moore (quadriceps) back into practice this week, at least on a limited basis.

When asked if he had no concerns that either rookie would be ready to play in Week 1, Saleh simply said: “God willing.”

NOTES: Lawson was officially placed on injured reserve Monday. ... The Jets waived CB Corey Ballentine and signed former Ravens DE Aaron Adeoye and well-traveled OL Isaiah Williams, who was most recently with the 49ers. ... Saleh said DT Quinnen Williams will see his practice snaps increased to about 20 this week from 10 to 12 last week. Williams is working his way back from offseason foot surgery. ... CB Bless Austin sat out against Green Bay for what Saleh said was personal reasons. Austin was on the sideline during the game, and Saleh said it was not discipline related. “Bless had a personal issue, and we felt like it was important for him to kind of regroup rather than throw him out on the football field.”