Jets' Le'Veon Bell wants to be No. 1 on field, in rap game 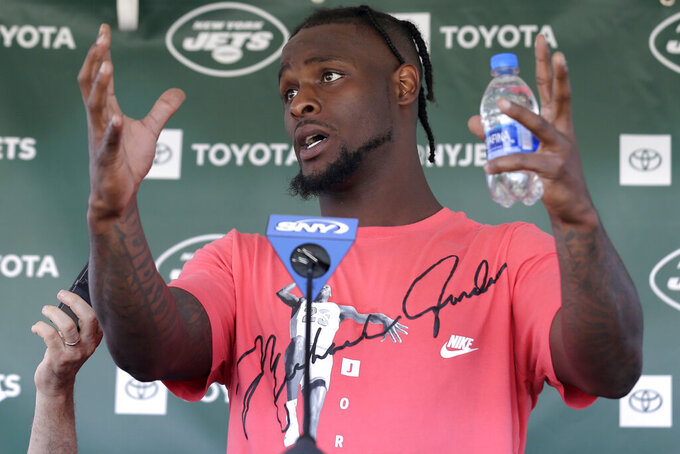 FILE - In this July 25, 2019, file photo, New York Jets running back Le'Veon Bell speaks to reporters after a practice at the NFL football team's training camp in Florham Park, N.J. Bell was in fifth grade when he realized he couldn't shake music from his mind. “That's when I really realized I loved music,” the star running back recalled in an interview with The Associated Press in the players' lobby in the New York Jets' facility. (AP Photo/Seth Wenig, File)

FLORHAM PARK, N.J. (AP) — Le'Veon Bell was in fifth grade when he simply couldn't shake music from his mind.

The creative beats. The grooving basslines. The raw lyrics.

He was hooked on it all, just like football.

"That's when I really realized I loved music," the star running back recalled in an interview with The Associated Press at the New York Jets' facility. "I remember 50 Cent, he had dropped the album 'Get Rich or Die Tryin', and I saved up my own money to go to Walmart and I bought the CD. I listened to the CD and I just remember thinking, 'Man, 50 Cent is so cool. I want to be like 50 Cent,' you know?"

Well, plenty of youngsters want to be like the 27-year-old Bell, who has been one of the NFL's most exciting and dynamic players throughout his career. His focus is squarely set on winning and returning his name to the conversation about the best running backs in the game after sitting out all last season in a contract dispute with the Pittsburgh Steelers.

But he has similar lofty goals for his burgeoning rap career.

"For real, I want to be No. 1," Bell said. "I want to hit the No. 1 song, the No. 1 Billboard (song), that's what I want to do. I want to eventually get better and get to those music shows, making songs with the great ones and things like that."

Bell and his middle school buddies would spend lunch breaks tapping their pencils against cafeteria tables, creating makeshift beats. They'd go back and forth, freestyling lyrics. No topics were off limits: school, home, friends, sports, girls — whatever came to mind.

By the time Bell got to Groveport High School in Ohio, he noticed he was a little better than everyone else, and not just on the football field.

"I was around guys that said they could rap, too," Bell said. "When people would just throw a beat on and they'd try to freestyle at the top of their head, and I could just do it for like five minutes straight without messing up, and staying on beat and other people couldn't do it, I'm thinking like, 'Oh, I'm better than you at freestyling.'"

Bell recorded his first song when he was 15, kept at it during college at Michigan State and got to know his way around a music studio the same way he deftly navigated opposing defenses. During his second season in Pittsburgh in 2014, he dropped his first music project.

"There's been no looking back since," Bell said. "I've been showing everybody I've been able to do it, I've been proud of it. I've been striving for it and I want to be the best at it. Just kind of how I take football, because I love it."

Bell has faced some backlash over the years from people who simply don't like his music or think it's an unnecessary distraction from football. That criticism ramped up last year, when he sat out the entire season with the Steelers in a contract dispute. He signed a four-year, $52.5 million contract with the Jets in March. When he makes his debut for New York, it'll be the first time he plays in a game in more than 19 months.

"Everybody has their own opinion and that's why I don't really take offense to it," Bell said. "I just try to do what I can to feed the fans that do like it. I just try to keep giving them what they like, so they're going to spread the word and maybe they find somebody else who likes it, and that's why the fan base keeps growing.

"You've got to deal with trolls and things like that, but I accept that. I just continue to do what I do, what makes me happy, because I know that at the end of the day, people are behind me."

Snoop Dogg is one of them — "We've got a song together, but I don't know when I'll drop it" — and the late Mac Miller was one of Bell's closest friends. Miller, who died last year, encouraged Bell to keep working and artists and producers will want to create music with him.

"Just because I made a name for myself in football," Bell said, "doesn't mean I've made my name in the music game yet."

Speaking of which, Bell went by the stage name "Juice" on his first several projects, but recently decided to drop it and go by his given name.

"It was an alter ego at first," he said. "It's not an alter ego anymore. It's just who I am. That's what I'm doing. Yes, I play football, and I do music. This is Le'Veon Bell. ... This is me: football player, rapper, entertainer, however you want to look at it."

Bell released an action-packed, cinematic-style video for his new single, "Slide," on Tuesday night. Directed by Christian Breslauer, it features the running back in military gear slowly dropping upside-down from a ceiling before a "Call of Duty"-style gun battle.

He plans to release an EP later this month before the regular season begins, and has a catalog of nearly 500 recorded songs that are mixed and edited. It's the result of spending entire weekends holed up in his Florida studio with his engineer during the offseason. He has another 200 or so songs that just need a little work.

Bell is deliberate with his music, just as he is with his running style. He'll record a song and then wait several weeks before deciding if he truly likes it.

He also never writes out any of his lyrics. He'll take a beat into the studio and spit lyrics on the spot.

"That's how you make the best music, when it's literally raw emotion," said Bell, who ranks Drake as his No. 1 artist.

He's focused on fine-tuning his vocals and experimenting with different styles. He was more melodic in his first few projects, but is a bit more hardcore lately.

"People kind of like this, what I'm doing, so I'm going to ride this wave until they want something else," Bell said. "I think that's what an artist's supposed to do, you know?"

With the season about to kick off, football comes first now. But music will always provide the soundtrack on auto-play in his mind.