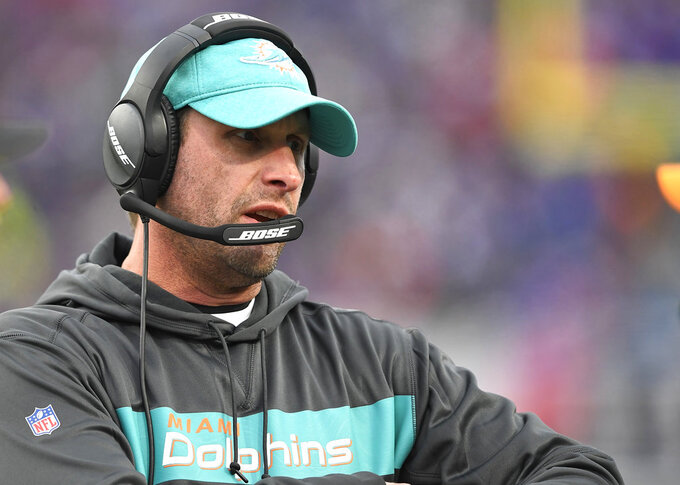 FILE - In this Sunday, Dec. 30, 2018 file photo, Miami Dolphins head coach Adam Gase watches the first half of an NFL football game against the Buffalo Bills in Orchard Park, N.Y. A person familiar with the decision says the New York Jets have hired former Miami Dolphins coach Adam Gase as their head coach. The person spoke to The Associated Press on condition of anonymity on Wednesday, Jan. 9, 2019 night because the team had not yet announced the hiring.(AP Photo/Adrian Kraus, File)

The team announced the hiring of the former Miami Dolphins coach as their head coach Friday after coming to an agreement on Wednesday night.

Gase will be formally introduced as the Jets' coach at a news conference Monday at the team's facility in Florham Park, New Jersey. The 40-year-old Gase was 23-26 in three years with Miami, including a playoff game in the 2016 season, before being fired last week.

"At the onset of the interview process, I wanted to hire a head coach who was the right person and the right fit for our organization," Jets chairman and CEO Christopher Johnson said in a statement on the team's website. "We talked to a number of excellent candidates and it became clear to me that Adam was the person who will help us establish a winning program and a winning culture."

Gase's hiring ended a wide-open search for New York, which fired Todd Bowles after the season finale and then met with seven other coaches about their vacancy, including Mike McCarthy, Kris Richard, Jim Caldwell, Eric Bieniemy, Todd Monken, Matt Rhule and Kliff Kingsbury, who took the Arizona Cardinals job.

Gase is the Jets' first hire with previous full-time NFL head coaching experience since Bill Parcells' three-year tenure from 1997-99. He's also the first offense-focused coach since Rich Kotite in 1996. Gase will be tasked with furthering the development of quarterback Sam Darnold and helping New York snap an eight-year postseason drought.

"Adam is a young, creative mind, but he also has 22 years of coaching experience," Johnson said. "He is an innovator whose path saw him succeed at both the college and the NFL levels. He has helped a number of different quarterbacks, at various stages of their careers, reach new heights. We think Sam will continue to develop under his tutelage, but we made the decision because of Adam's vision for the entire football team."

Gase began his coaching career as an assistant at LSU, before taking positions in the NFL with Detroit, San Francisco and Denver — where he was promoted to offensive coordinator and drew rave reviews from Peyton Manning. The former quarterback called Johnson on Wednesday to give Gase a glowing endorsement.

Darnold also spoke with Gase during the interview process.

"I'm just really, really pumped to have this attitude and buzz around this team," Darnold said in a story posted on the team's website. "And I think our fans can really look forward to scoring a lot of points and having a lot of, I guess, fireworks every single Sunday."