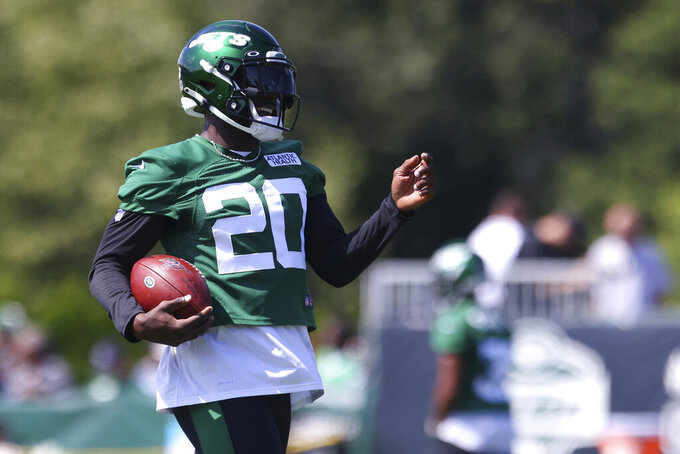 FLORHAM PARK, N.J. (AP) — Marcus Maye was hoping for a long-term contract extension in the offseason. He instead got a whole lot of uncertainty.

The New York Jets safety received the franchise tag in March, but he and the team failed to reach an agreement on a deal before the deadline on July 15. That means Maye will play on the tag amount of $10.6 million this season — and then everything is up in the air beyond that.

“I’ll play where I’m welcome,” Maye said Saturday in his first meeting with reporters since last season. “I was drafted here. I’d love to be here.”

That, however, remains to be seen.

The Jets could try to negotiate with Maye on an extension after the season — something the safety acknowledged he'd be open to. They could also choose to place the franchise tag on him again, preventing him from becoming a free agent. And that could cause further tension.

Maye could also try to force a trade, similar to what happened last summer with his buddy and former Jets safety Jamal Adams.

“I've got 17 weeks to be the best that I can be,” Maye said. “And then once we get to that point, we’ll cross that line again.”

Maye has established himself as one of the NFL's top free safeties and shown enough versatility to play various spots in the secondary. A second-rounder out of Florida in 2017 — after Adams went in the first round — Maye could have been a free agent during the offseason until general manager Joe Douglas and the Jets placed the franchise tag on him.

Maye said a deal was “not close enough to get done,” and was asked whether he believes the Jets treated him fairly or unfairly during the negotiations.

“Somewhere in the middle,” Maye acknowledged. “But from my end, I wasn’t happy and I wasn’t satisfied.”

Maye said he speaks with Adams frequently, and saw what his former teammate experienced before being traded to Seattle. He's not sure if he — like Adams — is no longer in the Jets' long-term plans or not valued as much as he believes he should be.

Maye has watched as some of the NFL's top safeties received big deals over the last year or so, including Denver's Justin Simmons, Arizona's Budda Baker and Chicago's Eddie Jackson. And Maye believes he should be paid like them.

"I feel like I’m right there with all of them,” he said.

Maye turned 28 in March and would be 29 next offseason while looking for a long-term deal from the Jets. He doesn't think his age is — or should be — an issue in the negotiations, as some have suggested.

“I’ve only played four years of professional football going into this year," he said, "so I don’t think the mileage or age has to do with anything.”

Meanwhile, Maye said he is focused on the field now. He says he enjoys playing for coach Robert Saleh and is expected to team with LaMarcus Joyner to anchor an otherwise young and inexperienced secondary.

“I just love playing football,” Maye said. “I mean, I’ve been doing this since I was a kid. And, you know, once you get over the business aspect of it, you can’t let them take your joy. So once I had discussions with my family and stuff like that, you know, I just got back to the basics and just went back to playing football.”