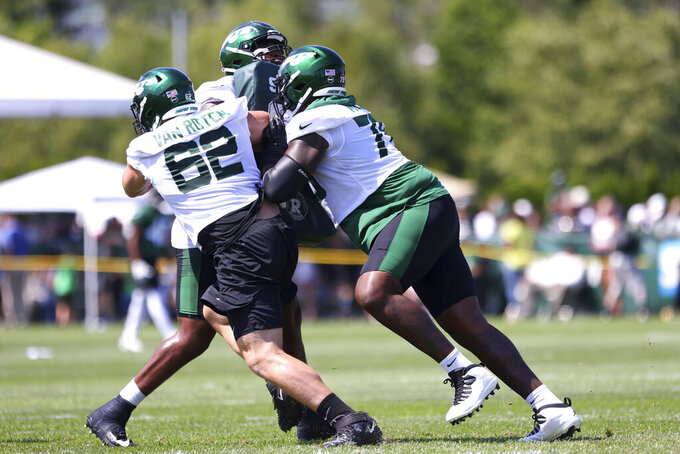 The big offensive tackle figured he'd still be in Washington, helping anchor the line as a durable presence for seven seasons as a fan favorite.

Instead, the 30-year-old Moses parted ways with the team that drafted him in the third round in 2014 — a surprising cut as a salary dump in May that saved Washington $7.5 million.

“It was out of the blue,” Moses said of Washington's decision. “But at the end of the day, man, I know God has a plan for me. And, you know, we landed here.”

The Jets signed Moses to a one-year, $3.6 million deal a few weeks before training camp, and he has quickly felt at home.

“It's been a fresh breath of air,” Moses said. “It's exciting and rejuvenating to be out there and see the guys flying around and be a part of something that is going to be great.”

Moses was considered by many to be the finishing touch to an offensive line overhaul by general manager Joe Douglas.

Alijah Vera-Tucker was drafted 14th overall to play left guard and team with left tackle Mekhi Becton, the Jets' first-rounder last year, to give New York a young foundation up front. Connor McGovern returns at center, but right guard is an open competition between incumbent Greg Van Roten and Alex Lewis, among others. Meanwhile, Moses is expected to take over at right tackle for George Fant, who was the starter last season — although Moses hasn't been declared the starter.

“Competition is everything for me,” Moses said. "Nothing is given. Everything that I’ve worked for in this league since I’ve been in the league, I’ve earned. And that’s how I want it to be. I feel like if things are given to you, we take it lightly. I’m here to get myself better and try to make this team and make the offensive line better.

“Whether that's in a starting role or not, I’m going to be the same guy. I’m going to show up every day and give my best effort.”

In Washington, Moses built a reputation for being remarkably reliable. He has started 96 consecutive games, an iron man-like streak that is rarely seen on the offensive and defensive lines because of all the pounding that takes such a physical toll.

“Availability is key,” Moses said. “That’s just the willpower of just not wanting to leave my guys out there by themselves.”

The former Virginia standout also attributes it to picking up tips from other players, and watching how they took care of their bodies during the rigors of the season. Former Washington teammate Trent Williams was a big influence, as was former defensive end Jason Hatcher.

“He was the one that got kind of introduced me to yoga,” Moses said. “Like, every off day, he would be like, ‘Hey, I’m picking you up. I’m taking you to yoga.’ We'd go to hot yoga. And just learning how to eat right.”

Clearly, it has worked.

A few teams were interested in adding Moses after Washington cut him, but the big tackle saw something in the Jets that intrigued him.

“The first thing they talked about was the offensive line and defensive line, is that we've got to win up front,” Moses said. “And I think when you have the mindset from a GM and it trickles down to the head coach that, hey, the game is won in the trenches, that’s how you start the winning process.”

Moses has made a point of trying to help the youngsters in the offensive line room, just as the veterans did for him early in his career. He's also helping defensive linemen such as John Franklin-Myers improve during training camp practices.

There was a moment Monday when Moses took Franklin-Myers to tell him he was doing something that was putting him at a disadvantage. Moses explained that making Franklin-Myers better is only going to help him improve.

“For him to do that,” Franklin-Myers said, "I think it speaks volumes to his character,”

It didn't take long for Moses to fit in and have a positive impact on the Jets — even if that wasn't necessarily in his plans just a few weeks ago.

“Change is always good," Moses said. "I had a great time at Washington. Like everything, it ran its course. But at the end of the day, I am here now and I feel welcome here, man.”