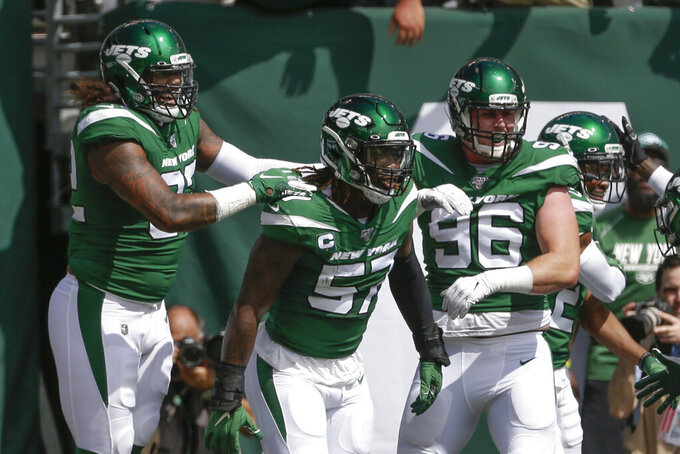 FILE - In this Sept. 8, 2019, file photo, New York Jets inside linebacker C.J. Mosley (57) celebrates with teammates after running back an interception for a touchdown during the first half of an NFL football game against the Buffalo Bills, in East Rutherford, N.J. Mosley says he will play Monday night against the New England Patriots barring any setbacks at practice this week. Mosley has been sidelined since injuring his groin during the third quarter of the Jets' season-opening loss to Buffalo. (AP Photo/Seth Wenig, File)

The star linebacker will miss five to six more weeks as he continues to deal with a groin injury that has sidelined him for most of the season.

Coach Adam Gase said Monday that Mosley will try to avoid surgery, with the hope he might be able to return during the final weeks.

"He went a specialist that he trusts," Gase said during a conference call. "Basically, they're going to try something different than surgery. And, really, the timeframe they gave us was five to six weeks. For us, it's better to leave him on the roster and kind of see where we're at when we get to that point and see where we are with our season and then make a determination after that."

Mosley injured his groin in the season opener against Buffalo and missed four games before returning last Monday night against New England. But he said he didn't feel 100% during that game and sat out against Jacksonville on Sunday.

The Jets signed Mosley to a five-year, $85 million deal in March after he played his first five NFL seasons in Baltimore.

He made an immediate impact in his debut for New York, returning an interception for a touchdown and recovering a fumble against the Bills, but hurt his groin while knocking away a pass in the end zone with 4:04 left in the third quarter. The injury turned out to be more severe than initially thought, and the Jets eased Mosley back.

The linebacker deemed himself ready to play a few days before the game against the Patriots, but then lacked his usual burst before ending up back on the sideline.

The Jets are thin at inside linebacker with Mosley dealing with his injury, and projected starter Avery Williamson out for the season with a knee injury. Backup Neville Hewitt missed the past two games with neck and knee issues and is seeing specialists, and Albert McClellan is in concussion protocol.

New York promoted James Burgess from the practice squad to play inside linebacker against the Jaguars.

Quarterback Sam Darnold is dealing with another injury, a sprained left thumb that Gase said the quarterback will play through.

Darnold was hurt during the loss at Jacksonville and played with his thumb and left hand wrapped.

That comes after he needed a toenail removed on his left big toe after the Jets' loss to New England last Monday night. Darnold also missed three games earlier this season while dealing with mononucleosis.

"I think for me the thumb is going to be a pain tolerance thing," Darnold said, "which I should be fine with."

Center Ryan Kalil will be week to week with a knee injury. Jonotthan Harrison will replace him if he can't play Sunday at Miami.

"We're just going to see how he feels heading into Wednesday," Gase said, "and we'll have a better idea then."