Jets open camp with playoffs a 'realistic goal' this season 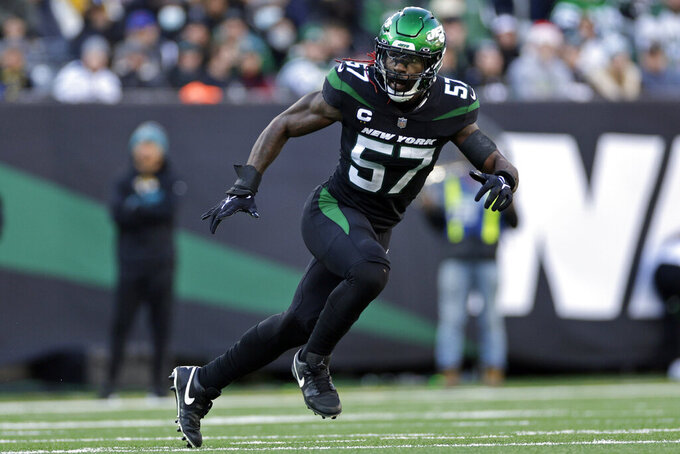 FILE - New York Jets linebacker C.J. Mosley (57) defends against the Jacksonville Jaguars during an NFL football game, on Dec. 26, 2021, in East Rutherford, N.J. For a franchise that hasn't made the playoffs in 11 seasons - the NFL's longest active drought - it's all talk. But the Jets believe this season could truly be different. (AP Photo/Adam Hunger, File)

FLORHAM PARK, N.J. (AP) — Stop if you’ve heard this before: There’s optimism among the New York Jets as they head into training camp.

For a franchise that hasn’t made the playoffs in 11 seasons — the NFL’s longest active drought — it’s all just talk, of course. But the Jets believe this season could truly be different.

C.J. Mosley told al.com, his hometown newspaper in Alabama, last month that he's "really expecting playoffs or bust.” The 30-year-old linebacker didn't back down from that bold statement when the Jets reported for training camp Tuesday.

“I feel it’s a realistic goal because that’s why we play this game,” Mosley said. "We come here to win football games. You want to leave a legacy wherever you are. And guys came here this offseason to try to win, be great in New Jersey-slash-New York.

Sure, that sounds good. But lots of losing has been the reality during the past decade-plus for the Jets, with postseason dreams mostly vanished before the last month of the regular season.

They went 4-13 last year in coach Robert Saleh's first season, with Zach Wilson going through the typical struggles of a rookie quarterback. But there were flashes of optimism throughout the season, and again during the offseason when the Jets added lots of playmaking talent in free agency and the draft, including a trio of first-rounders in cornerback Ahmad “Sauce” Gardner, wide receiver Garrett Wilson and defensive end Jermaine Johnson.

And that is what has Jets players believing Mosley is on to something.

“I think he's spot on,” said cornerback D.J. Reed, who signed a three-year, $33 million contract with New York in March. “I think it’s just going to take everyone to be at their best. And I think that isn’t just on Sundays. I think that’s an every day commitment.”

Changing culture is a popular buzz phrase at this time of year around the NFL. And Jets fans, still looking for another trip to the Super Bowl since their last in 1969 in the glory days of Joe Namath, are tired and frustrated of hearing it.

But these Jets players insist it's real.

“The bonds that have been built for me here just in OTAs, I’ve made a lot of closer bonds this time in OTAs than I did in a couple of years in Minnesota,” said tight end Tyler Conklin, who signed a three-year, $21 million deal with the Jets in March. “And I think that just goes to show the culture they built.”

The Jets are trying to tune out the negativity by sporting “Positive Vibes Only” T-shirts around the facility. They're visible reminders that it doesn't matter what the talk is outside the facility. Inside, they're feeling good — and can keep that feeling going through the summer and into the regular season.

But ultimately, wins and losses will determine whether this season is truly different. And that will largely depend on Wilson taking a huge next step in his season season.

There are plenty of other factors at play, too. Saleh and his staff — including offensive coordinator Mike LaFleur and defensive coordinator Jeff Ulbrich have to show improvement in their all-around game planning and management. The retooled offensive line and revamped secondary need to jell quickly and become strengths.

With Carl Lawson healthy and ready to pick up where he left off last summer before a ruptured Achilles tendon ended his season, the defensive line appears to be a big strength. And Wilson has more playmakers in a suddenly promising offense with Garrett Wilson in the mix along with tight ends Conklin and C.J. Uzomah and second-round running back Breece Hall.

So all of that has the Jets feeling pretty good right now ahead of their first training camp practice. And they're determined to keep that going all the way through the regular season — and maybe, just maybe, into the playoffs.

“There’s always going to be ups and downs going into a season,” Mosley said. “There's going to be setbacks and drawbacks. But, you know, all that builds character for each other when we’re trying to build something special.”