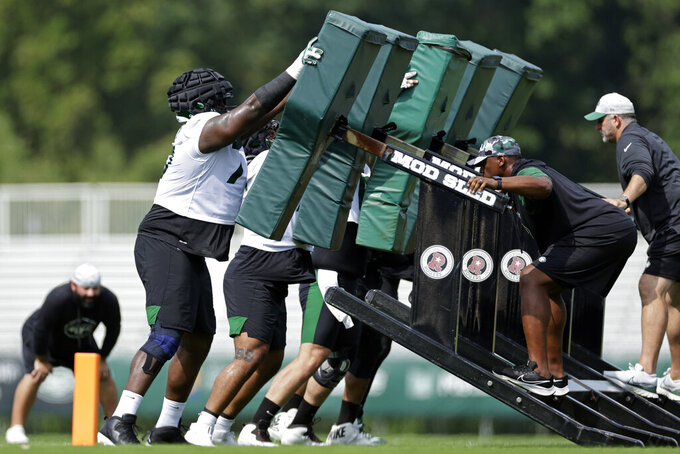 A person with direct knowledge of the injury told The Associated Press that Becton will continue to have tests on the knee, and it is unrelated to the one that sidelined him for almost all of last season. The person spoke to the AP on condition of anonymity because the team did not announce details on the injury.

NFL Network first reported that the injury to Becton was more concerning than the team originally thought.

The 6-foot-7 Becton, entering his third NFL season, was run-blocking at right tackle on the second play of team drills when he went down on the grass and immediately grabbed at his knee. The 2020 first-round draft pick was down for a few moments before trying to get up, and needed assistance from trainers to walk off the field.

He took off his pads and eventually walked very gingerly on his own to the locker room with a noticeable limp.

“The only thing I got is that it's stable and it seems fine," coach Robert Saleh said. "That's preliminary, obviously. We're just going to get it checked for precautionary reasons. But as of now, it doesn't seem like it's a big deal, but knock on wood, hopefully that stays the case.”

An MRI on the knee later in the afternoon apparently revealed otherwise.

If Becton is forced to miss any significant time, it would be a major setback for a player in the middle of adjusting to a position change. Becton entered his first two NFL seasons as the starter on the left side, but suffered a dislocated right kneecap and cartilage damage in the opening game last year at Carolina. He missed the rest of the season and was replaced by George Fant, who slid over from right tackle and played well in Becton's place.

Entering training camp, Saleh announced Fant would retain the starting spot at left tackle and Becton would move to the right side. Becton appeared to be making strides at right tackle in recent practices, but began wearing a brace on his right knee late last week. He was also on what Saleh called a “pitch count” during the team's scrimmage at MetLife Stadium on Saturday night, and was taken out before practice was over.

During positional drills Monday, Becton was seen limping a bit and adjusting the brace on his knee before participating in team drills.

Becton, whose weight has also been a hot topic during his brief NFL career, has played in just 15 games for the Jets. ESPN reported he ballooned to around 400 pounds last season, but Becton reported for camp noticeably slimmer than he was in minicamp in June.

The Jets' depth at offensive tackle was already a question mark before Becton's latest injury, especially after backup Conor McDermott went down with a lower ankle injury in the scrimmage. Saleh said McDermott should be sidelined a week or two, but the Jets have shown interest in free agent offensive tackle Duane Brown.

The former Seahawks and Texans veteran, a five-time Pro Bowl pick who turns 37 on Aug. 30, met with the Jets over the weekend and attended the team's scrimmage. Still, Saleh insisted the Jets still like their depth chart at tackle and aren't necessarily desperate to add a veteran as a backup.

Chuma Edoga has filled in at times at left tackle this summer for Fant, and the Jets also have Derrick Kelly, Grant Hermanns and Max Mitchell, a fourth-rounder in April, at the offensive tackle spots. NFL Network also reported New York is expected to sign free agent Caleb Benenoch, who has experience at tackle and guard.

“Getting a guy like Duane Brown is kind of like getting spoiled, in a sense,” Saleh said. "Just having such great talent, I guess, at one position. But we do have faith in our backup offensive linemen. Any time you get hurt and you've got to test your depth, it does become scary waters. But at the same time, that's why we put in all this work and do our best to try to prepare these guys to take those spots.

NOTES: CB D.J. Reed, RB Ty Johnson and DE Vinny Curry all were held out of practice with hamstring ailments. ... Saleh said he expects the starters on offense and defense to play about one quarter in New York's preseason opener Friday night at Philadelphia.