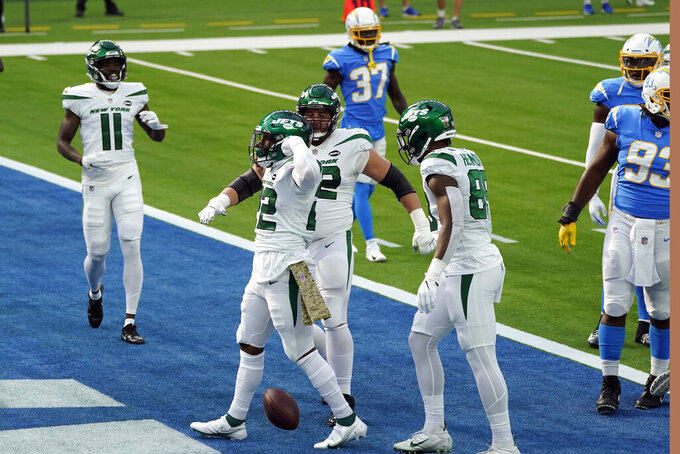 New York Jets running back La'Mical Perine, secdond from left, celebrates after scoring against the Los Angeles Chargers during the first half of an NFL football game Sunday, Nov. 22, 2020, in Inglewood, Calif. (AP Photo/Jae C. Hong)

Perine, a fourth-round pick out of Florida, has a high ankle sprain and coach Adam Gase said Monday the running back would likely be out a few weeks. The rookie also missed time early this season with a high ankle sprain, but it’s uncertain if the injury is to the same foot.

Perine had seen increased action in the past few games for the Jets while splitting carries with Frank Gore. He had his second touchdown run of his career against the Chargers before leaving. Perine has rushed for 202 yards on 55 carries, and has 10 catches for 49 yards.

Adams will take Perine’s place in the Jets’ backfield, which also includes Gore and Ty Johnson. Adams was on New York’s active roster for the first two games of the season and ran for 8 yards and a TD on three carries. He also has two catches for 14 yards.

Ficken missed three games with an injured right groin and returned last Sunday, but missed two extra-point attempts in New York's 34-28 loss to the Los Angeles Chargers. It's uncertain if Ficken re-injured himself or if the same injury affected him during the game. He made his two other PAT attempts.

Ficken had been having a solid second season with the Jets before the injury, going 9 for 10 on field goals.

Sergio Castillo will replace Ficken again after performing well in his place for three games. He was 6 for 7 on field goals — with the only miss a block — and made all four of his extra point tries.

Travis, who was on the active roster for one game this season, was restored Monday from the practice squad's reserve/COVID-19 list.

White has bounced between the Jets' practice squad and active gameday roster, serving as the backup quarterback in several games.