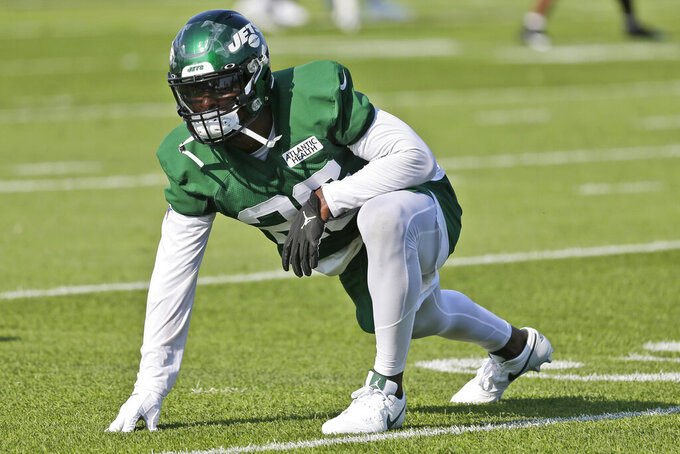 STRENGTHS: Second-year QB Sam Darnold showed encouraging signs in final four games of rookie season and has followed that with impressive training camp and preseason. Gase has raved about Darnold's natural instincts and maturity, and how excited he is to coach player at this stage of development. Bringing in Bell — refreshed and motivated after sitting year out in contract dispute with Steelers — with Montgomery complementing him in versatile backfield will only help Darnold. Crowder adds shifty slot presence at receiver to go along with speedy Robby Anderson and tough Quincy Enunwa. S Jamal Adams coming off first Pro Bowl selection and is quickly becoming among best playmakers at position. Addition of Mosley gives Jets veteran leader and proven playmaker in middle of defense.

WEAKNESSES: Cornerback spot is major concern with Trumaine Johnson dealing with hamstring injury and not much experienced depth behind him. Jets could be vulnerable against passing game, especially if pass rush isn't more disruptive than in recent seasons. Linebacker corps took major blow in second preseason game when ILB Avery Williamson was lost for season with torn knee ligament. Offensive line still work in progress after Kalil ended retirement during camp and was working to get back in football shape, while every other projected starter — RT Brandon Shell, RG Brian Winters, LG Kelechi Osemele — other than LT Kelvin Beachum was dealing with injury midway through preseason schedule. Jets have glaring question mark at kicker after allowing Myers to leave as free agent and Chandler Catanzaro abruptly retired early in camp.

FANTASY PLAYERS TO WATCH: Bell and Crowder. Bell was fantasy beast before sitting out and is eager to re-establish himself as top all-around RB in NFL. Should get plenty of touches, particularly out of backfield as safety valve for Darnold. Crowder could be sneaky add for fantasy owners if he stays healthy. Might quickly become favorite target for Darnold.

EXPECTATIONS: Gase and Williams give Jets re-energized attitude with swagger on both offense and defense. Whether that translates to victories this season will depend on how Darnold continues to develop, whether Bell can recapture dominant form, and if defense can defend against passing game consistently. Key will be beginning of schedule, with opening stretch at home vs. Buffalo and Cleveland, at New England, bye week, at Philadelphia, and home vs. Dallas and New England setting tone for season early.