Jets QB Darnold ruled out vs. Eagles, Falk to start 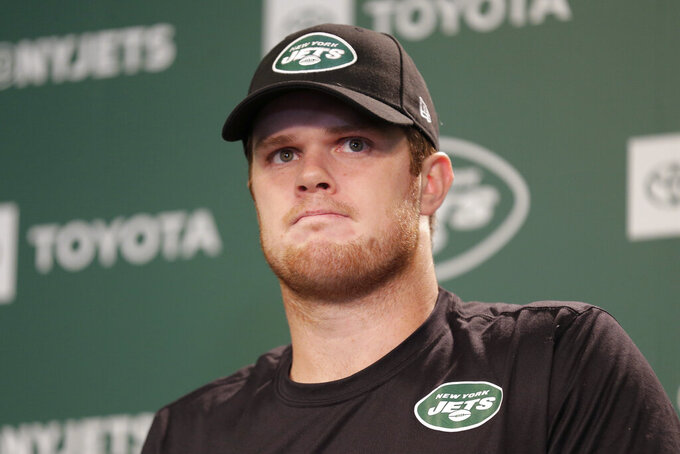 FILE - In this May 23, 2019, file photo, New York Jets quarterback Sam Darnold speaks to reporters after an NFL football practice in Florham Park, N.J. Darnold has been ruled out for New York's game at Philadelphia on Sunday as he continues to recover from mononucleosis. Coach Adam Gase says Friday that Darnold had tests Thursday night, and the results of which were not sufficient enough for doctors to clear him to play. (AP Photo/Seth Wenig, File)

NEW YORK (AP) — Sam Darnold's return will have to wait at least another week.

The New York Jets quarterback was ruled out for the team's game at Philadelphia on Sunday as he continues to recover from mononucleosis.

Darnold was originally scheduled to have medical tests Friday, but the doctors instead ran them Thursday night.

"The labs didn't come back the way that we were hoping," coach Adam Gase said Friday. "I know Sam's disappointed, but we're able to adjust and work quickly. Our guys have done a good job with any kind of changes that we've had to make."

Darnold was diagnosed with mononucleosis on Sept. 11, three days after the season-opening loss to Buffalo. The initial hope was the 22-year-old quarterback might be ready to play again this week, but doctors have been monitoring Darnold's spleen, which became enlarged, a common symptom of mononucleosis. A swollen spleen could rupture — a potentially life-threatening situation — if the area takes a hit, leading to the caution with which the doctors and team are using.

"Sad for Sam that he has to go through this another week, but I'm excited for my opportunity," Falk said. "I'm excited to go out there and play and help my team win."

This will mark the sixth game Darnold has missed since beginning his NFL career last season as the No. 3 overall pick in the draft. He also sat out three games midway through last season with a foot injury and was replaced during that stretch by Josh McCown — now the backup to Carson Wentz in Philadelphia.

Darnold was cleared Monday for non-contact activity and had been taking the bulk of the first-team snaps on offense. He was upbeat and positive while speaking to reporters Thursday, but understood the seriousness of balancing wanting to come back with making sure his health is fine.

"It's a tough thing because you want to stay safe," Darnold said Thursday. "I want to make sure that I'm safe out there, and that, you know, I'm not going to die."

Gase said Darnold was predictably disappointed when the team gave him the test results.

"It just didn't work out for him."

There is optimism Darnold will be able to return against Dallas on Oct. 13.

For now, Falk will again lead the Jets' struggling offense.

He went 12 of 22 for 98 yards in his NFL starting debut at New England in Week 3 after opening the season on the Jets' practice squad. New York managed just 105 total yards against the Patriots and went 0 for 12 on third downs.

"Yeah, that was not a good day for us," Gase said.

Falk was pressed into action in Week 2 against Cleveland when then-starter Trevor Siemian went down with a season-ending ankle injury. Falk will get all the snaps in practice Friday, and Gase is confident the second-year quarterback will be up to speed by Sunday.

"We were ready for either way," Gase said. "We didn't know. Even when we started it, we didn't know. We were just trying to make sure that anything that we did was the right thing as far as play calls and things like that to make sure we didn't put (Darnold) in a bad spot if they cleared him."

NOTES: The Jets claimed OL Conor McDermott off waivers from the Bills and waived DL Bronson Kaufusi. McDermott played in eight games for Buffalo over the last three seasons. Kaufusi had three tackles and a half-sack in three games this year. ... DL John Franklin-Myers was placed on injured reserve. He had been dealing with a foot injury early in the season, but it is uncertain if that was what is currently ailing him. ... LB Jordan Jenkins (calf) was ruled out for the game, while LB C.J. Mosley (groin) and LG Kelechi Osemele (shoulder/knee) are doubtful. ... WR Demaryius Thomas (hamstring) is questionable after being injured against Cleveland and missing the game at New England. "He's looked good in practice," Gase said. "It's looking very positive for us." ... Also questionable are defensive lineman Quinnen Williams (ankle), WR Josh Bellamy (shoulder) and TE Dan Brown (ankle).