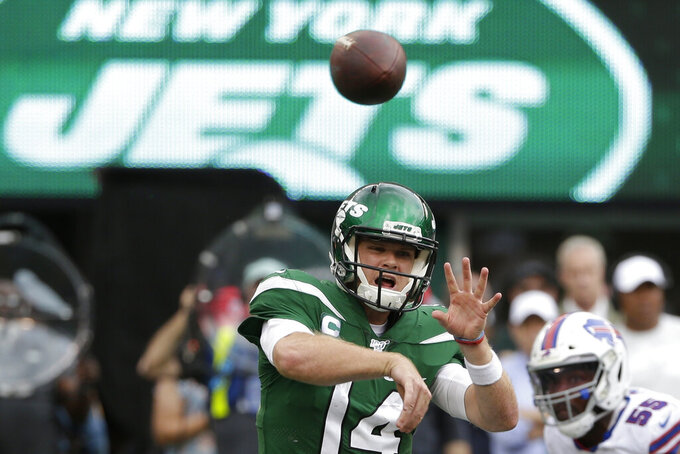 NEW YORK (AP) — Sam Darnold's spleen is fully healthy and he'll be back under center as the struggling Jets' starting quarterback.

Darnold was cleared by doctors Tuesday to play this week after he missed three games while recovering from mononucleosis. He had medical tests to determine if the swelling in his spleen — a common symptom of the illness — had dissipated enough for him to play again. The Jets announced in a Twitter post that Darnold would start Sunday at home against Dallas.

It's some rare good news for the Jets, who are 0-4 — their worst start since 2003 — while dealing with several injuries to key players. And Darnold's illness is at the top of the list.

The team was optimistic last week that Darnold would be able to play at Philadelphia, which was the initial goal for his return. Darnold took first-team snaps last Wednesday and Thursday, but an ultrasound and blood test last Thursday night revealed he was not yet able to be fully cleared. So Luke Falk — on one day of full reps with the first-team offense — started his second straight game for New York.

The Jets lost 31-6 and Falk was sacked nine times and had two turnovers returned for touchdowns while New York struggled to get anything going on offense. That has been a common theme during Darnold's absence, with Adam Gase's offense ranking at or near the bottom of the league in several categories. New York has just 233 yards of total offense in its last two games combined. With Falk starting, the Jets had 105 against New England two weeks ago and 128 at Philadelphia.

"It's probably more than just Sam getting out there," Gase said Monday. "We have a lot of other things to clean up. Sam is able to hide things sometimes for us, where if we make a mistake, he covers it up. I think we just need to do a better job as a group making sure that all 11 are on the same page."

Darnold was diagnosed with mono on Sept. 11, three days after the season-opening loss to Buffalo. He acknowledged that he was beginning to experience symptoms leading into that game and was not 100% against the Bills, going 28 of 41 for 175 yards and a touchdown. He was sent home before practice three days later and received the diagnosis that night.

Backup Trevor Siemian started in Week 2 against Cleveland, but he suffered season-ending ligament damage in his left ankle in the 23-3 loss. Falk, who had been on the practice squad until shortly before that game, came in and started the next two games for the Jets.

Darnold was cleared for non-contact activity last Monday and appeared to be trending toward playing at Philadelphia — until another medical test failed to bring positive results. But the quarterback was eager for the latest round of tests.

"I'm excited to hear the news," Darnold said Monday during his weekly appearance on "The Michael Kay Show" on 98.7 ESPN Radio. "I have a feeling it's going to be good news. I thought maybe it would come last week, but I had to wait it out again. Hopefully, this week it's better news and I get to practice and get ready for a game on Sunday."

Darnold is all clear now, and the Jets have their starting quarterback back on the field.

"Let's get it Sammy," an excited running back Le'Veon Bell wrote on Twitter.

Darnold said last week that when he was cleared to play, he would wear customized padding around his ribcage/spleen area to help protect him. That's something to watch as the Jets have allowed an NFL-leading 23 sacks.

The short-handed Jets are still waiting for linebackers C.J. Mosley (groin) and Jordan Jenkins (calf) to return, and starting left guard Kelechi Osemele is dealing with knee and shoulder injuries. Wide receiver Quincy Enunwa (neck) was lost for the season with a neck injury against Buffalo, further hindering the offense.

"We have a lot of talent," defensive lineman Leonard Williams said Monday. "We're 0-4 right now, but the season isn't over and we still have a lot to fight for."