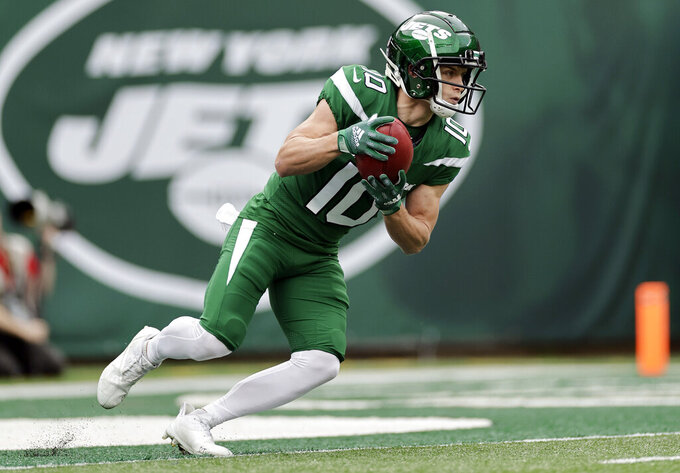 All-Pro kick returner Braxton Berrios and veteran running back Tevin Coleman were re-signed Monday. And the Jets also agreed to terms on deals with former 49ers guard Laken Tomlinson and former Bengals tight end C.J. Uzomah, according to people with direct knowledge of the signings as the NFL's legal tampering period of free agency kicked off.

Berrios was re-signed to a two-year, $12 million deal, keeping the versatile wide receiver after a breakout season. The deal includes $7 million fully guaranteed, according to Berrios’ agent Drew Rosenhaus.

Coleman ran for 356 yards on 84 carries last year in his first season with the Jets, and caught 11 passes for 49 yards. He'll again provide a change-of-pace presence in New York's backfield that will be led by Michael Carter, who's coming off a solid rookie season.

Tomlinson comes to New York on a three-year contract worth up to $41.2 million with incentives and includes $27 million guaranteed, according to one of the people who spoke to The Associated Press on condition of anonymity because the deal had not yet been announced by the team.

ESPN first reported the Jets' deal with Uzomah, who helped lead Cincinnati to the Super Bowl. ESPN reported the tight end, who had 163 catches for 1,591 yards and 13 touchdowns in seven seasons with the Bengals, was signing a three-year, $24 million contract with the Jets.

Uzomah will immediately help a spot at which the Jets have been trying to find production for several years. He set career highs last season with 49 catches, 493 yards receiving and five touchdowns in the Bengals' Joe Burrow-led offense.

The 26-year-old Berrios spent the last three years with the Jets, but emerged this past season as one of the NFL's top returners while leading the league with an average of 30.4 yards on kickoffs. He also brought back a kickoff 102 yards for a touchdown against Jacksonville in Week 15. Last season marked Berrios' first extended action as a kickoff returner after previously primarily returning punts.

Berrios also proved himself a reliable and consistent receiver for rookie quarterback Zach Wilson, catching a career-high 46 passes for 431 yards and two touchdowns. He also rushed seven times for 40 yards and two scores.

Berrios confirmed his return to the Jets on Twitter, writing: “WE’RE BAAAACK”

With the 30-year-old Tomlinson, general manager Joe Douglas upgrades the offensive line with a durable veteran who is coming off his first career Pro Bowl selection as an alternate. He has missed just one game during his seven-year NFL career, and none the last four seasons.

Tomlinson was a first-round draft pick of Detroit in 2015 who was traded to San Francisco in 2017. In New York, he'll be reunited with Jets coach Robert Saleh and offensive coordinator Mike LaFleur, who Tomlinson played under in San Francisco.

Tomlinson has been a left guard throughout his career, but is likely to shift to the right side with the Jets. Alijah Vera-Tucker, a first-round pick last year, had a very good rookie season at left guard. Tomlinson is a marked upgrade over Greg Van Roten and Laurent Duvernay-Tardif, who both started at right guard last season.

Van Roten will become a backup or be released, and Duvernay-Tardif is scheduled to become a free agent.

Douglas vowed to improve the blocking unit over the past few seasons. He has spent two first-round picks over the last two years — Vera-Tucker last year and left tackle Mekhi Becton in 2020 — and now signed one of the most coveted interior offensive linemen in free agency.