Jets release Osemele a day after he has non-approved surgery 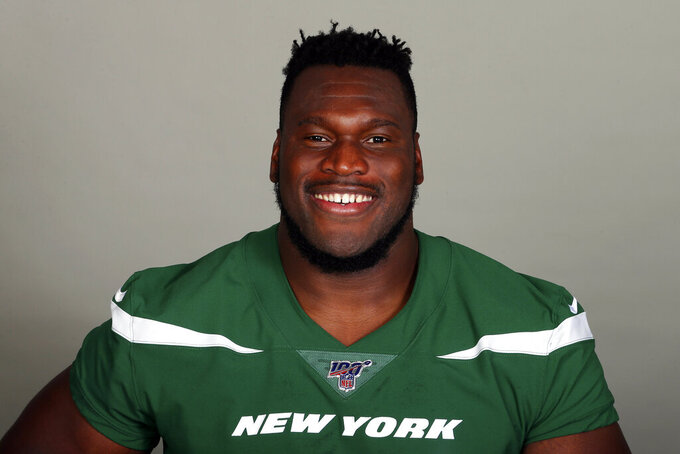 FILE - This is a 2019, file photo, shows Kelechi Osemele of the New York Jets NFL football team. Osemele is having surgery on his ailing right shoulder despite the team not approving the procedure. The operation to repair a torn labrum was performed Friday, Oct. 25, 2019, by Dr. Glen Ross in Boston, according to Osemele's agent Andrew Kessler. (AP Photo/File)

NEW YORK (AP) — Kelechi Osemele is no longer a member of the New York Jets.

The veteran guard's contentious standoff with the team, however, is far from over.

The Jets announced Saturday they released Osemele a day after he had surgery on his right shoulder in Boston to repair a torn labrum without the team's approval. New York was made aware of Osemele's plan to have surgery, but because he was not with the team and the surgery wasn't authorized, it was considered an unexcused absence.

The Jets had been fining Osemele the maximum allowed under the collective bargaining agreement — $579,000 per week, the amount of each of his game checks — for not practicing, saying it was "conduct detrimental to the team." Osemele had filed a grievance with the NFL Players Association against the team.

"They owe him the balance of his contract both under the standard injury guarantee provision of the player contract and under termination pay," Osemele's agent, Andrew Kessler, said in a statement. "We will pursue through that and all fines to be rescinded through grievances."

Osemele was making a fully guaranteed $9.85 million this season, so he is due about $5.2 million more over the final nine weeks.

The 30-year-old offensive lineman was scheduled to make $11.35 million next season, but that money was not guaranteed and he said earlier this week he "absolutely, 100%" expected to be cut by the Jets in the offseason.

It turned out, the move happened even sooner.

Osemele was listed on the team's injury report Friday as doubtful to play at Jacksonville and then downgraded Saturday to out. The Jets later announced they cut ties with him.

The Jets have not yet publicly commented on the situation, with coach Adam Gase saying that's an issue for general manager Joe Douglas and the front office, and he's simply preparing his team for its game at Jacksonville.

Osemele, acquired in a trade with Oakland in March, said he first felt pain in the shoulder on Aug. 5 during training camp with the Jets. The two-time Pro Bowl selection said he re-injured the shoulder at New England on Sept. 22. He has not played or practiced since.

The root of the conflict has been over when Osemele needed to have the surgery — immediately or after the season. The Jets believe, based on the medical reports from the team doctor and an independent doctor, that it is a pre-existing injury Osemele has played through for a while. The offensive lineman, however, said he can no longer take painkillers and needed the surgery now so he has time to heal and prepare for next season.

Osemele said he was receiving treatments on the shoulder during the first three weeks of the season and taking anti-inflammatory prescription drugs, but he did not appear on the Jets' injury reports with a shoulder ailment during that time. Osemele flew to Boston on Tuesday to be examined by Dr. Glen Ross for a third opinion and posted the doctor's report on his Instagram page Wednesday night but later deleted it. Ross' note said Osemele "should undergo a right shoulder arthroscopy, labral repair and cyst debridement." He added that Osemele "has a posterior/inferior labral tear and a large cyst."

Osemele then decided to have Ross perform the surgery on Friday — despite the team still not approving it.

ESPN reported Saturday that damage to the shoulder was more extensive than initially thought, and Osemele's agents and the NFLPA are considering taking action against the Jets' team doctors for violating state medical board regulations.

Osemele was a second-round draft pick of Baltimore out of Iowa State in 2012. After four seasons with the Ravens, he signed a five-year, $60 million contract with the Raiders and made the Pro Bowl in his first two years in Oakland. After an injury-plagued season last year, Oakland traded him to the Jets along with a sixth-round draft pick for a fifth-rounder.

The Jets signed linebacker James Burgess from the practice squad to take Osemele's spot on the roster. New York is thin at inside linebacker with C.J. Mosley out with a groin injury, Albert McClellan sidelined with a concussion and Neville Hewitt doubtful with knee and neck ailments. Linebacker Ukeme Eligwe was also signed to the practice squad.