Jets release RB Crowell after agreeing to terms with Bell 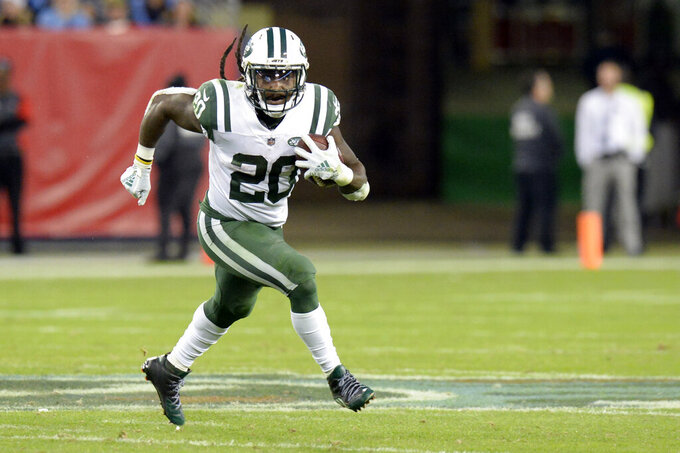 FILE - In this Dec. 2, 2018, file photo, New York Jets running back Isaiah Crowell carries the ball against the Tennessee Titans in the second half of an NFL football game, in Nashville, Tenn. The Jets have released running back Isaiah Crowell, an expected move after the team agreed to terms early Wednesday morning, March 13, 2019, with Le'Veon Bell.(AP Photo/Mark Zaleski, File)

Crowell spent one season with the Jets after playing his first four in Cleveland. He broke the franchise record with 219 yards rushing on just 15 carries in New York's win over Denver in Week 5. He also set the team mark with 231 yards from scrimmage.

The Jets had until Friday before $2 million of Crowell's $4 million salary became guaranteed. By releasing him now, New York gains $3 million on the salary cap, but is stuck with $2 million in dead money.

The addition of Bell, officially announced by the Jets on Thursday night , made Crowell expendable. The former Pittsburgh Steelers star signed a four-year deal worth $52.5 million.

The 26-year-old Crowell finished with 685 yards rushing and six touchdowns last year before a toe injury ended his season in December.

Crowell made headlines in New York's Week 3 loss at Cleveland last season when he scored a touchdown in the second quarter against his former team and wiped the football against his rear end. The crude celebration resulted in an unsportsmanlike conduct penalty and, later, a $13,369 fine from the NFL. It wasn't all bad for Crowell, who received an endorsement deal with DUDE Wipes, a company that sells a toilet paper substitute for men.

The Jets also announced they re-signed starting nose tackle Steve McLendon, who has spent the last three years with the team, as well as offensive lineman Jonotthan Harrison and defensive back Darryl Roberts.

New York's trade with Oakland for left guard Kelechi Osemele was also made official by the team Thursday night. The Jets sent their fifth-round draft pick to the Raiders for Osemele and Oakland's sixth-rounder. Osemele will replace James Carpenter, who signed with Atlanta as a free agent.