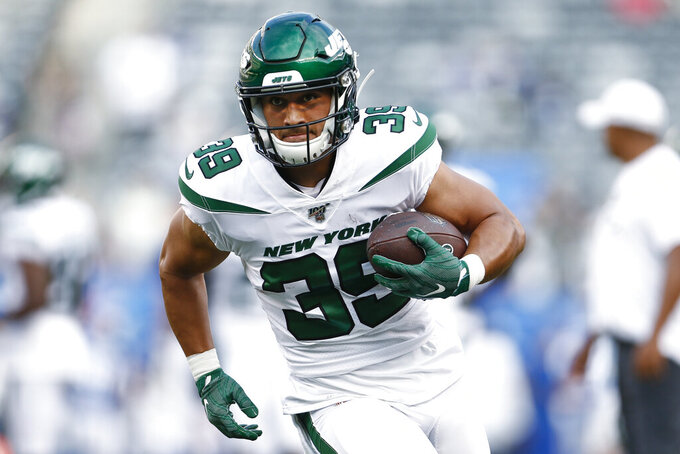 The New York Jets released Holmes, who played running back and wide receiver, from their practice squad Friday.

He participated in offseason workouts, training camp and the preseason with New York. As part of the NFL’s program, all four AFC East teams received an extra spot on their practice squads this season for players to continue working on their football skills.

Holmes was a standout winger and fullback for the Cronulla-Sutherland Sharks of the National Rugby League. He headed to the United States for a chance to pursue his dream of playing American football in the NFL. Holmes had one year left on his contract with the Sharks, but instead had the team release him and passed up about $720,000.

“I just felt like I wanted to test myself as a person and an athlete,” Holmes told The Associated Press in August. “I wasn’t really thinking about what I was giving up, I guess. It was just that I wanted to chase more.”

Holmes is a massive star in Australia, racking up 369 points in five seasons with the Sharks. He represented Australia in the 2017 Rugby League World Cup, where he set a record with 12 tries — the equivalent of touchdowns — in the tournament.

Holmes first worked out for NFL scouts in Los Angeles in 2016, and spent three months early this year learning American football at IMG Academy in Florida before joining the Jets in the spring.

He played in all four preseason games and had 11 carries for 9 yards, eight catches for 85 yards and a 21-yard kickoff return.

NOTES: LB C.J. Mosley is the only player ruled out for the game against Oakland on Sunday as he continues to recover from a groin injury. He has missed all but two games this season because of the injury. ... S Matthias Farley (quadriceps), CB Darryl Roberts (calf) and LB Paul Worrilow (quadriceps) are doubtful. ... DE Henry Anderson, LT Kelvin Beachum, LB Brandon Copeland, OL Chuma Edoga, LB Neville Hewitt, G Alex Lewis, NT Steve McLendon and WR Demaryius Thomas are all questionable.