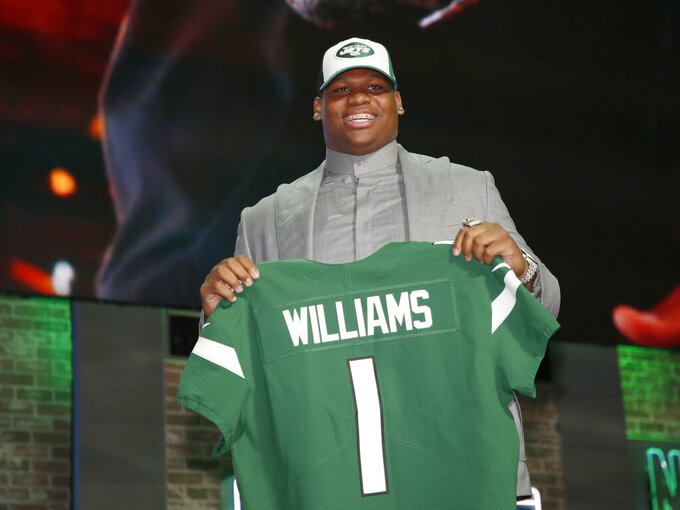 FILE - In this April 25, 2019, file photo, Quinnen Williams poses with his new team jersey after the New York Jets selected Williams in the first round at the NFL football draft in Nashville, Tenn. The New York Jets have reported for training camp without top draft pick Quinnen Williams, who remains unsigned. The sticking point appears to be the schedule of how Williams' signing bonus of about $21.7 million will be paid. The Jets hold their first camp practice Thursday morning, July 25. (AP Photo/Jeff Haynes, File)

FLORHAM PARK, N.J. (AP) — The New York Jets are setting up camp without their top rookie.

Defensive lineman Quinnen Williams, the No. 3 overall pick in April, remained unsigned Wednesday morning and was not among the players who arrived at the team's training facility to report for training camp.

"This is part of the end of the draft process," coach Adam Gase said. "When he's ready, he's ready. When they're ready to get it done, whenever that happens, it happens. We'll coach the guys that are here."

Williams is slotted to receive a four-year contract worth $32.6 million fully guaranteed, with a fifth-year team option. The sticking point appears to be the schedule of how the former Alabama star's signing bonus — about $21.7 million — will be paid.

According to published reports, Williams would like to receive the entire sum by the end of the year, while the team and new general manager Joe Douglas are looking to defer some of it into next year.

The sides could still reach an agreement before the Jets hold their first camp practice Thursday morning. For now, though, Williams is the only Jets player to not report.

So, when would it be a concern if Williams isn't signed?

"The playoffs," Gase joked while managing a straight face.

The Jets were in a similar situation last year — albeit with a different coach and general manager in charge— when quarterback Sam Darnold sat out the first three days of camp practices before signing his rookie deal.

Darnold, who won the starting job over Josh McCown last summer, didn't think missing a little time on the field at the beginning of camp affected him negatively.

"Really, at the end of the day, those few practices — really, a couple of practices — I did miss, I don't know how much of an impact that had on the season," Darnold said.

Williams was limited during minicamp last month with a calf issue, but is expected to have a major role — perhaps even as a starter — in coordinator Gregg Williams' defense this season when he rejoins his Jets teammates.

NOTES: Gase said all the players who reported Wednesday were healthy and ready to participate fully in practice, but the team later announced that CB Brian Poole and OL Toa Lobendahn were placed on the non-football injury list. S Marcus Maye (shoulder/thumb) and S Brandon Bryant (foot) were placed on the physically unable to perform list Monday, while rookie CB Bless Austin (knee) is on the non-football injury list. ... Former Steelers star WR Hines Ward is one of the team's four interns in camp as part of the Bill Walsh minority coaching fellowship. He joins former Jets WR David Clowney, currently the WRs and TEs coach and co-coordinator at Howard University; Stephen Bravo-Brown, Missouri State's assistant WRs coach; and Bowie State head coach Damon Reginald Wilson. Former Jets left tackle D'Brickashaw Ferguson and linebacker Calvin Pace will serve as the team's two Nunn-Wooten Scouting Fellowship participants as part of the NFL's Football Development program. ... The Jets signed TE Temuchin Hodges — formerly known as Bucky Hodges — to add depth to the position. He was cut by New York early in training camp and then spent time with Pittsburgh. Hodges has also been with Minnesota and Carolina.