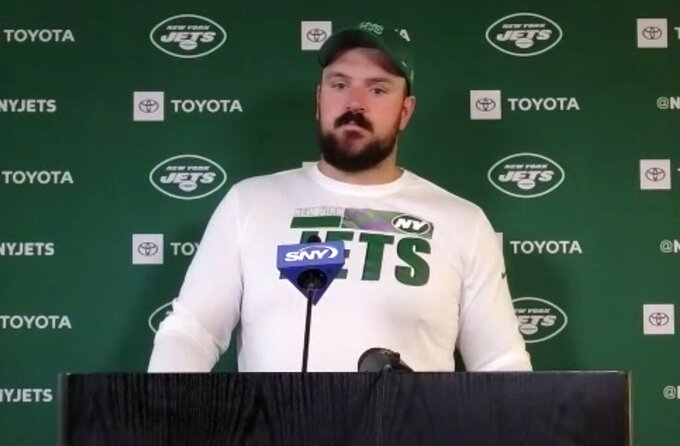 In a video grab from a Zoom news conference, New York Jets center Connor McGovern speaks Friday, Aug. 14, 2020, at the NFL football team's facility in Florham Park, N.J. The big guys up front on the Jets' offensive line got close while being far apart. Group texts. Silly memes. Funny jokes. Serious Zoom conversations. They all helped keep the lines of communication open during months of social-distanced bonding for a revamped unit loaded with several players who had never actually met each other in person until a few weeks ago because of the coronavirus pandemic. (New York Jets via AP)

FLORHAM PARK, N.J. (AP) — The big guys up front on the New York Jets' offensive line got close while being far apart.

They all helped keep the lines of communication open during a few months of social-distanced bonding for a revamped unit loaded with several players who never actually met each other in person until a few weeks ago because of the coronavirus pandemic.

“To be honest with you, I don’t know if it’s the group of guys that (general manager) Joe Douglas brought together or the pandemic or what have you,” center Connor McGovern said. “But this is one of the closer groups as a whole I've been around.”

That’s a tribute to the players, with many forced to get to know each other — and their senses of humor — from afar. Guard Greg Van Roten, a Penn graduate, emerged as a comedic star on the group texts.

“Greg's going to be in with very high level humor, being an Ivy Leaguer,” McGovern said with a smile before adding that guard Alex Lewis is also pretty funny. “Everybody has their kind of niche and we’ve meshed really well.”

The Jets will be just the fourth NFL team since the 2010 season to start five different offensive lineman in Week 1 of a season from the group that started the season opener the previous year. New York will join the 2018 Indianapolis Colts, 2015 Kansas City Chiefs and 2014 Miami Dolphins to undergo such drastic turnovers on the O-line.

“Thankfully, we are all veterans and we’ve all played football before, so it’s not our first time on the field,” Van Roten said. “It's just going to be our first time next each other. So the biggest challenge when you have a new group like that is that we all speak football, but we might call things by different names. So we've just got to get on the same page with our communication if we want to be effective and hit the ground running fast.

“So there’s going to be a learning curve, but I don’t think it’s going to be this insurmountable obstacle that we just can’t figure out.”

They were inconsistent and struggled mightily. None remains with the team.

This year's projected starting O-line in Week 1 at Buffalo is: McGovern at center, first-round pick Mekhi Becton at left tackle, Lewis at left guard, George Fant at right tackle and Van Roten at right guard. Only Lewis, who started 12 games after Osemele was cut early in the season after a dispute over a shoulder injury, was with the team last year.

“When you look at our offensive line, we’re a lot bigger than last year, I know that,” coach Adam Gase said. “It’s a really good-looking group, it’s very deep. I’ve really been impressed how these guys work.”

McGovern, Fant and Van Roten signed three-year deals during free agency, and the 6-foot-7, 363-pound Becton joined the bunch a few weeks later as the No. 11 overall pick.

Since finally coming together in person a few weeks ago, the newcomers and the handful of returning backups have picked up right where they left off on their phones.

No traditional group dinners because of the pandemic, of course. But study sessions and video game marathons are regular events.

“There’s not a whole lot else to do but hang out with each other,” McGovern said. “It’s actually kind of funny how just something as simple as playing Call of Duty as a group of four of us or whoever, how much that brings you together because you're joking and all that kind of stuff.”

Quarterback Sam Darnold has joined some of the meetings, getting a feel for the guys who will be in front of him. With no preseason games this summer, practice time in camp is even more valuable.

“Every single rep I get with them, I make sure that I’m clear on what the cadence is,” Darnold said. “The guys have been really good and those guys are asking a ton of good questions and it’s just been really good so far.”

The Jets can also look to this nugget of optimism: Of the three teams since 2010 that were in a similar position on the offensive line, two went on to make the playoffs — Colts and Chiefs — and the Dolphins finished 8-8.

“We’re talking through the playbook with each other after our runs," Lewis said. "In the locker room, we're quizzing each other, just pushing one another. That’s the best way you can build chemistry right now. We’re trying to take full advantage of all the time we have together.”

NOTES: The Jets signed TE Connor Davis and released S Anthony Cioffi. Davis, who went to Stony Brook, most recently played in the XFL and AAF. Cioffi, a former Rutgers standout, was signed as a free agent in February. ... New York also released LB Ahmad Gooden, who had been on the reserve/COVID-19 list since July 29. ... DB Shyheim Carter was activated from the reserve/COVID-19 list.