Jets' Saleh staying connected to oversee all aspects of team 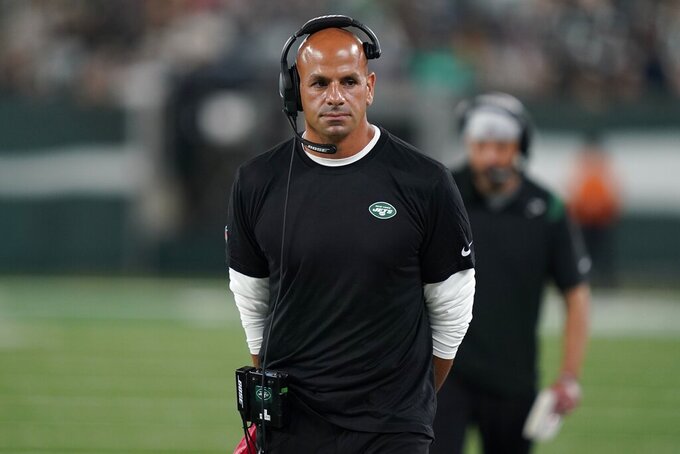 FLORHAM PARK, N.J. (AP) — Robert Saleh is sitting in on the New York Jets' defense, offense and special teams meetings one screen at a time.

The first-year head coach has made a point of overseeing all aspects of his squad, not just his specialty: the defense. Saleh wants to have his finger on the pulse of his entire operation — the sort of CEO-type approach the Jets preferred when they were searching for their new on-field leader in January.

“Today, I spent time in the offensive room,” Saleh said before practice Sunday. “I've got a little convenient deal where I can watch them all from my office. I don’t want people to coach differently just because I’m in there. So I get an opportunity to watch anybody I want. So today, I spent a little bit more time with the offense.”

While physically being in meetings remains an option, Saleh also keep tabs on every position group with the help of technology. The Jets' meeting rooms have cameras installed and Saleh can view them all on his computer in his office. He's able to remotely pop in and out of each to get a feel for the game plans, teachings and film reviews being discussed — and offer his input.

Saleh borrowed the idea from Mike and Kyle Shanahan, who took a similar approach to overseeing all aspects of their teams.

“It’s not necessarily to spy, but it’s more of an opportunity to just go in there and just watch and just stay connected,” said Saleh, who was Kyle Shanahan's defensive coordinator in San Francisco the past four years.

“What you find is, when talking to Poppa and Kyle," Saleh added, "when head coaches are present in the room, coaches tend to coach differently because of, you know, they’re trying not to show up guys and embarrass guys in front of the head coach.”

Sort of like when the principal sits in on a class at school — and everyone is on their best behavior.

It's a drastically different approach from the Jets' previous regime as then-coach Adam Gase acknowledged he left overseeing the defense solely to then-coordinator Gregg Williams while he focused on the offense.

Saleh's hands-on approach isn't about micro-managing, either. It merely gives him a better feel for the vibe in each room while also providing first-hand knowledge of what teaching points are being made and what the coaches want to see from the players on the field.

There's another benefit to Saleh's approach: The meetings can be recorded and used to help newly signed or acquired players get up to speed quicker.

“When you do get people in the building, new players, they have a chance to go watch installs,” Saleh explained. “Not all meetings are recorded, but the install ones (are), just so the players can look back and they can get caught up. So there’s a process behind it, and I took a liking to it. So I've got to credit those two men (the Shanahans).”

With training camp over, the Jets are focused now on reaching the 53-man player roster limit by 4 p.m. Tuesday — and planning for their Week 1 matchup with Sam Darnold and the Panthers in Carolina on Sept. 12.

That will mark Saleh's first regular-season game as a head coach, but he insists his excitement level hasn't changed much from earlier this offseason.

“It's a cliché, but I’ve been taking all this in,” Saleh said. “All of it’s been exciting. Obviously, the games are the games but, it’s for real now, or whatever you want to call it. Everything’s had meaning, though. It doesn’t change the meaning. Maybe the game didn’t count, but it mattered with preseason. Every single day matters and all of it's exciting and, obviously, we’re going to be a little more amped up for Week 1 but, it doesn’t change how much it matters.”

NOTES: CB Brandin Echols practiced after leaving the preseason game against Philadelphia on Friday night with a shoulder injury. ... LT Mekhi Becton remains in the concussion protocol, but Saleh has no concerns about his availability for the season opener. ... RB La'Mical Perine (foot), WR Denzel Mims (hip) and S Lamarcus Joyner (back) are day to day, but should be ready for Week 1.