Jets' Saleh 'torn' on playing his starters vs. Falcons 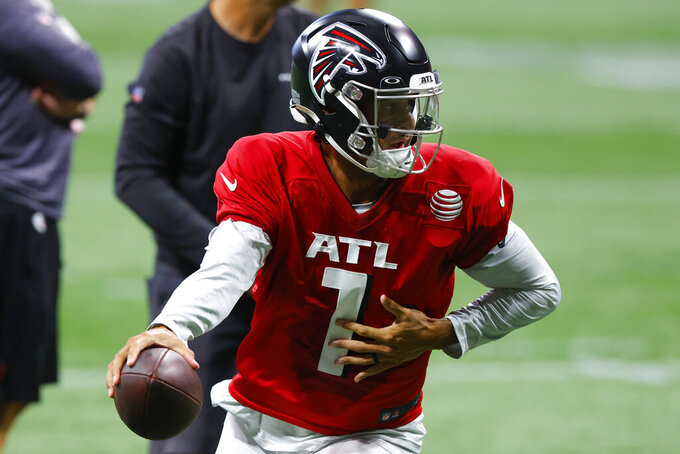 FLORHAM PARK, N.J. (AP) — Joe Flacco and the rest of the New York Jets' starters might have to get comfortable on the sideline Monday night.

Coach Robert Saleh said Saturday he's unsure what the team's plan is for who'll see the field — and for how long — in the Jets' preseason game against the Atlanta Falcons.

It could be a little gamesmanship, of course, even in the preseason. But it also could be a bit of caution after seeing quarterback Zach Wilson go down for a few weeks with a knee injury in New York's second offensive series of the preseason opener at Philadelphia.

Falcons coach Arthur Smith hadn't announced if quarterback Marcus Mariota and his team's starters will play against the Jets after they were on the field for one quarter in their first preseason game at Detroit.

The fact it's a prime-time game also could factor into Saleh's decision.

While Saleh doesn't want to make any game bigger than any others, he cited the “human aspect” of how people view the Monday night contests. It's also a chance for players to perform in front of their peers on the only televised game that night.

“The biggest thing for me is it's a great opportunity to give our guys that opportunity to go through the mental aspect of a heightened environment and something they dream of so they can manage Week 1,” Saleh said. “So I'm torn on that one.”

Despite the 37-year-old Flacco entering his 15th NFL season, Saleh didn't exclude him from that discussion.

“I put him in that same boat,” Saleh said. “He doesn't need it, but I feel like everyone can always use it because it's a reminder of how to get yourself prepared and making sure every game is just a normal game.”

One other thing that might influence Saleh's decision is the fact the Jets and Falcons had two practices in the heat during joint sessions Friday and Saturday.

“We got in two really good days of work,” he said. “Normally, with these joint practices, you don't want to play in the game because you've gotten a heavy workload.”

After the first day of joint practices featured three early skirmishes between the Jets' defense and Falcons' offense, there was only one instance Saturday of pushing/shoving — and it was quickly diffused.

The teams also didn't wear full pads, something Smith said Saleh requested after the teams did so Friday.

“He just asked me because you look around, a lot of times the second day, the injury rates tended to be higher,” Smith told reporters. “So we thought it was best for both teams to get that work and allow us to work man-cover stuff and whatnot.”