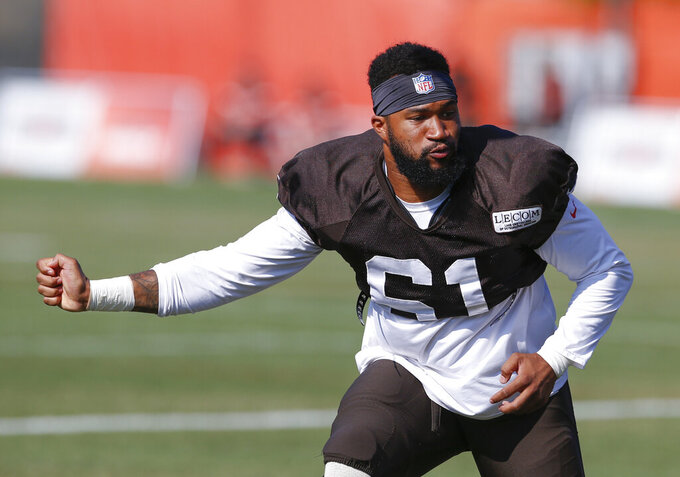 FILE - In this July 29, 2019, file photo, Cleveland Browns defensive end Wyatt Ray warms up before practice at the NFL football team's training facility in Berea, Ohio. The New York Jets signed Ray to the practice squad on Monday, Nov. 25, 2019. He is the grandson of the late Nat King Cole and nephew of the late Natalie Cole. Ray’s mother Casey is a twin younger sister of Natalie Cole. (AP Photo/Ron Schwane, File)

NEW YORK (AP) — Wyatt Ray is getting another chance to be a big hit in the NFL.

The New York Jets signed the linebacker with famous musical bloodlines to the practice squad on Monday.

Ray was released from Buffalo’s practice squad on Nov. 6 after being signed last month. The 6-foot-3, 255-pound pass rusher was signed by Cleveland in May as an undrafted free agent out of Boston College. He was among the Browns’ final cuts in training camp and also spent time on Houston’s practice squad earlier this season.

Ray had 17 career sacks at Boston College, including nine sacks in 12 games in his last season.

The Jets released linebacker Jamey Mosley to make room for Ray on the practice squad.

Mosley, the younger brother of Jets linebacker C.J. Mosley, had two stints on New York’s practice squad this season. He was signed as an undrafted free agent out of Alabama in May.