Jets sign QB Josh Johnson to give them experienced backup 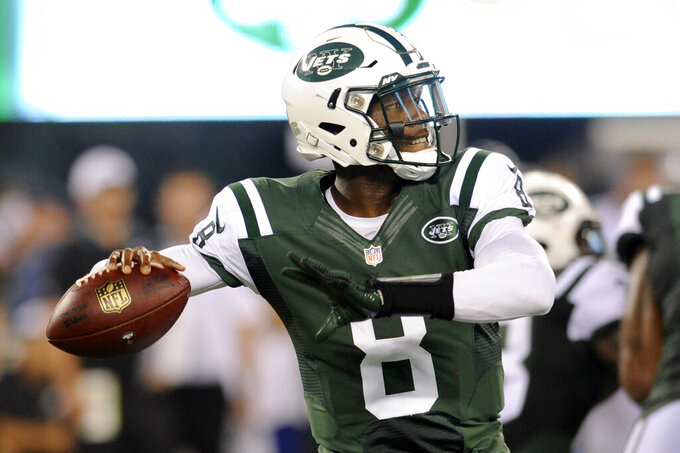 The 35-year-old Johnson fills a void in the Jets' quarterbacks room, which had Wilson, Mike White and James Morgan — none of whom has taken a regular-season snap in an NFL game. Coach Robert Saleh said the Jets had been talking to Johnson throughout the offseason, but insisted his presence won’t do anything to deter the development of White or Morgan.

“He's a tremendous pro,” said Saleh, who was with Johnson last year in the QB's third stint with the 49ers. “He knows our system and as far as understanding the whys of our system, the hows of our system and how to be a pro, just to bring that into the room as a presence.”

Johnson, who was on the field for practice Wednesday, has played in 33 games with eight starts. He has 1,632 yards passing with eight touchdowns and 14 interceptions while serving mostly as a backup throughout his career.

The Jets are Johnson's 14th NFL team, and this is his second stint with New York after he spent the end of camp with the franchise in 2015.

Johnson has also been with Tampa Bay, which drafted him in the fifth round out of San Diego in 2009, San Francisco (three times), Cleveland, Cincinnati (twice), Indianapolis, Buffalo, Baltimore, the Giants, Houston, Oakland, Washington and Detroit. He also had stints in the XFL and the Alliance of American Football.

“It's definitely good to see him out here,” said running back Tevin Coleman, who was with Johnson last season in San Francisco. “I think he'll help just knowing the playbook a little bit and helping those guys learn more and what to see out there."

Offensive lineman Cameron Clark was expected to be released from the hospital Wednesday, a day after injuring his neck on the practice field and being taken to the hospital by ambulance.

Clark was diagnosed with a bruised spinal cord and is expected to make a full recovery.

“It was a tremendous sense of relief,” said Saleh, who visited Clark along with GM Joe Douglas on Tuesday night. “He’s in great spirits. He’s supposed to get out today and just get a chance to get him back to being Cameron, but obviously a big sigh of relief.”

Saleh said there was no timetable as to when Clark, a fourth-rounder out of Charlotte last year, will be able to get back on the field. Clark, who didn't play last year in a regular-season game, is in the mix for a backup role.

Rookie left guard Alijah Vera-Tucker, the No. 14 overall pick, sat out practice with a strained pectoral and is considered day to day. ... Second-year defensive lineman Jabari Zuniga is also day to day with an ankle injury. ... Saleh said offensive lineman Chuma Edoga could be sidelined a week or so with a knee ailment.

Carl Lawson has been one of the most impressive and consistent performers during training camp, already making the Jets look smart for doling out a three-year, $45 million contract to the former Bengals defensive end.

But it's what Lawson does off the field that has New York defensive coordinator Jeff Ulbrich in awe.

Lawson is expected to be a pass-rushing force for the Jets, who have been looking for years for a player who consistently disrupts quarterbacks. He has done throughout his NFL career, even if the sack totals — 20 in four seasons — aren't gaudy.

“I had some of the highest regard for him before he even got here,” Ulbrich said. “I think he’s one of those rare guys where he’s an exceptional player, but the general public doesn’t know him yet. The general public is obviously very caught up in sacks and quarterback disruption, the statistical part of (pass) rushing. He doesn’t always check those boxes, but he’s been a guy that’s got historic win rates.”