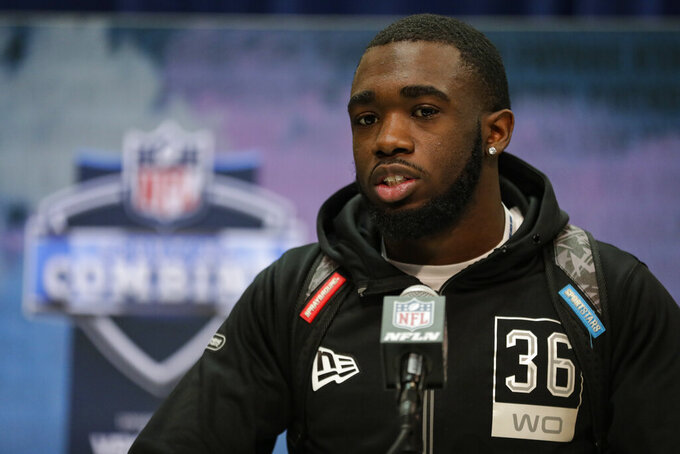 NEW YORK (AP) — The New York Jets got Adam Gase and Sam Darnold a much-needed playmaker on offense, even after trading down in the second round of the draft.

Baylor wide receiver Denzel Mims was the Jets' pick at No. 59 after they originally had the 48th overall selection. New York decided to move down 11 spots Friday night, dealing the pick to Seattle while also receiving the Seahawks’ third-rounder (No. 101).

They still ended up getting a player who could immediately help Gase’s offense as a speedy playmaker.

“I make plays all around the field,” Mims said during a Zoom conference call. “When it comes down to crunch time, when it comes down to the end of the game, I want the spotlight. I mean, I want to be the one to help the team get the victory and I want everything on me, on my shoulders.”

General manager Joe Douglas said the Jets had a “strong group of players” on their board — and not only wide receivers — at No. 48, so they were comfortable trading down.

“We may be losing a few, but there are still going to be enough players there that you're excited about,” Douglas said.

The Jets flipped the third-round pick they received from the Seahawks to AFC East rival New England, trading it for the Patriots' two fourth-round selections (Nos. 125 and 129) and a sixth-rounder in 2021.

It was believed New York would target a wide receiver at No. 48, but several players at the position — including Clemson's Tee Higgins, USC's Michael Pittman Jr., Colorado's Laviska Shenault and Penn State's K.J. Hamler — were drafted in the second round before the Jets went on the clock.

“I was a little surprised,” Mims said of his slide. “But, one thing I was taught is you can only control what you can control. So, I got upset a little bit, but I cleared up and just let everything happen.”

Douglas recently told reporters he promised Darnold's parents that he'd get playmakers and protectors for the young signal caller.

He lived up to that with the Jets' first two selections in the draft, including taking Louisville offensive tackle Mekhi Becton with the 11th overall pick in the first round Thursday night.

The 6-foot-2, 207-pound Mims remained on the board when the Jets’ second-round pick came up again, and Douglas grabbed him.

“Denzel had a real chip on his shoulder,” Douglas said of his telephone conversation with Mims after he was selected. "It was important to him that he was going to make these teams pay for passing him up. We can't wait to get that type of competitor, that type of mentality in the building.”

Mims was a football, basketball and track star in high school in Daingerfield, Texas, and showed that athleticism on a weekly basis for Baylor under then-coach Matt Rhule. He also left some scouts wide-eyed when he ran a 4.38 in the 40-yard dash at the combine in February.

New York’s wide receiver corps was a question mark entering the draft with Jamison Crowder, who led the Jets last season with 78 catches, and Breshad Perriman, who was signed in free agency, the only sure things on the roster. Veteran Quincy Enunwa’s playing future remains uncertain after he injured his neck for the second time and missed all last season.

Davis was primarily a safety for Cal, but also has experience at cornerback. His physical style and versatility should play well in Gregg Williams' defense. He could combine with starters Jamal Adams and Marcus Maye in three-safety or nickel packages.

“I’m comfortable playing in and out," Davis said during a Zoom conference call. "Whatever they ask me to do, I’m capable of doing it.”

The 6-1, 202-pound Davis has solid speed, which could make him a potential fit at kick returner, and he also served as the team's gunner.

He had groin surgery in December, so he didn't participate in the combine. But, once healthy, he sent out videos to teams of him doing position work to show he was OK. Davis is considered an exceptional athlete; he also ran hurdles on Cal’s track team and was a four-time All-America selection.

Zuniga could help another of the Jets' major needs as an edge rusher who flashed ability to get to the quarterback at Florida. The 6-4, 255-pound defensive end played in only six games last season because of ankle injuries, but had 18 1/2 sacks in four years with the Gators.

“I definitely consider myself the steal of the draft,” Zuniga said.

The selection of Zuniga marked the second straight year the Jets took a Florida defensive lineman in the third round — and they hope this one sticks around a lot longer. Then-GM Mike Maccaganan drafted Jachai Polite last year, but Polite was cut after a subpar training camp.

The Jets have a busy final day of the draft with three fourth-round picks, a fifth-rounder and two sixth-rounders scheduled.