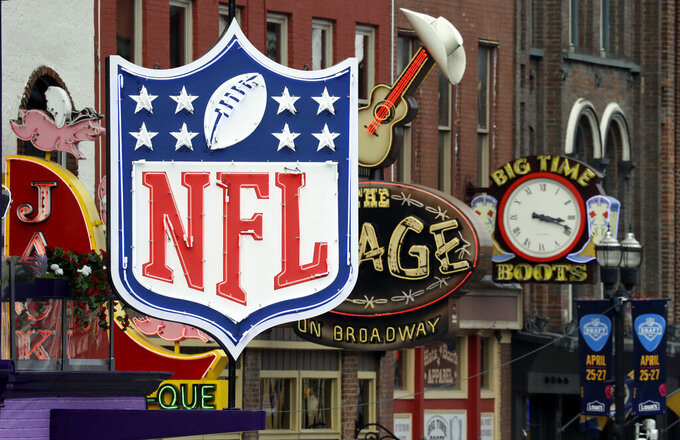 A temporary NFL neon sign joins the permanent ones along Broadway as preparation continues for the NFL Draft Tuesday, April 23, 2019, in Nashville, Tenn. The NFL Draft is scheduled to be held Thursday through Saturday. (AP Photo/Mark Humphrey)

FLORHAM PARK, N.J. (AP) — Mike Maccagnan and the Jets began the final day of the NFL draft by wheeling and dealing.

New York traded down twice in the fourth round Saturday before taking West Virginia tight end Trevon Wesco with the 121st pick.

With the fifth-round selection, New York took Minnesota linebacker Blake Cashman. The Jets picked Rutgers cornerback Blessuan Austin in the sixth round at No. 196 overall to complete their three-day haul.

The 6-foot-3, 267-pound Wesco was used primarily as a blocking tight end in college and also profiled as a fullback and/or H-back in the NFL. He caught 26 passes for 366 yards and one touchdown last season for the Mountaineers.

"In college, I played tight end, I played fullback," Wesco said during a conference call. "I would say my versatility is my strength."

Wesco began his college career at Lackawanna College in Scranton, Pennsylvania, where he played two seasons — and had a redshirt year as a sophomore — before going to West Virginia. Statistically, Wesco didn't put up big numbers his first two seasons with the Mountaineers but had a breakout campaign as a senior and was named to the All-Big 12 first team.

"I feel good as a pass catcher," Wesco said, adding that he dropped only two passes last season. "I've always caught the ball. Since I was younger, I've always had the ball in my hand — playing quarterback, and I played receiver when I was younger in high school. I'm really comfortable with that. I mean, I don't feel like I have a problem with that."

He was a walk-on at Minnesota and eventually became a starter and team captain for the Gophers. Cashman had 15 tackles for losses last season, and drew the attention of the Jets.

"They were a team that reached out to me a few times between the combine and draft," Cashman said during a conference call. "I met with them at the combine twice and then again at pro day. ... I felt like it was a great fit and I couldn't be more pumped up and ready to go."

Cashman has had three shoulder procedures since 2016, but said he's healthy and has no issues with them.

"My shoulders feel great," he said. "Over the past year, I've worked with a specialist and designed my training around it to make sure that my shoulders are very stable and healthy."

Austin comes to the Jets after some injury concerns in college. He had 14 pass breakups as a sophomore in 2016 while starting 11 games at cornerback and being selected as an All-Big Ten honorable mention. But he tore the anterior cruciate ligament in his left knee in the fourth game of his junior year, then re-injured the knee in the season opener last year.

"Going through the knee injuries and having some success and being so close to the pinnacle of my career and to be constantly knocked down, it was just hard to deal with," an emotional Austin said during a conference call. "I've been blessed with perseverance and having the ability to go through adversity, and that's what got me here today."

It wasn't immediately clear if he'll be healthy enough to participate fully in workouts and minicamp, but Austin considers himself a "freakish athlete" and is excited to get an opportunity despite his medical hardships.

The Queens, New York, native acknowledged he grew up a Giants fan — but, that was then, of course.

"The switchover won't be hard," Austin said. "At all."