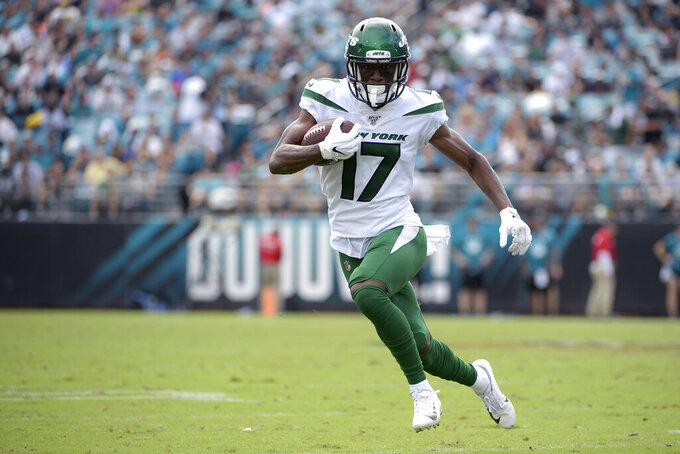 FILE - In this Oct. 27, 2019, file photo, New York Jets wide receiver Vyncint Smith (17) runs after catching a pass during the second half of an NFL football game against the Jacksonville Jaguars in Jacksonville, Fla. Vyncint Smith had surgery Tuesday, Aug. 18, 2020, to repair a core muscle injury and could be sidelined up to two months. Adam Gase confirmed the procedure and prognosis, saying Smith will likely miss 5-to-8 weeks. (AP Photo/Phelan M. Ebenhack, File)

Smith caught 17 passes for 225 yards and started four games last season for the Jets. He also returned 10 kickoffs and averaged 29.9 yards, and was expected to be a prominent contributor on both offense and special teams before being injured last weekend.

“It's not ideal,” Gase said of Smith being sidelined. “It's one of those situations I can't really pinpoint where he got hurt in practice. You just kind of saw him slowing down and he didn't feel right and the next thing you know, he's having surgery.”

Smith's injury leaves the Jets very short-handed at the wide receiver position. New York had only seven players at the position during a walkthrough practice Tuesday, with rookie Denzel Mims still sidelined with a hamstring injury and Braxton Berrios excused for personal reasons.

The team agreed to terms with veteran receiver Chris Hogan over the weekend, and he was expected to take his physical and potentially sign his contract Tuesday. Gase was unsure when Hogan would be able to participate in practice.

“Hopefully we get him out there soon,” Gase said.

The 24-year-old Smith was originally signed by Houston in 2018 as an undrafted free agent out of Limestone College. He had five catches for 91 yards and a touchdown with the Texans, but was among the team's final camp cuts last summer. The Jets signed him off Houston's practice squad last September.

He saw increased playing time with New York late in the season, and his versatility was used by Gase. Smith had three rushes for 52 yards, including a 19-yard touchdown.

With Smith sidelined, receivers such as Jeff Smith and rookies Lawrence Cager and George Campbell will see increased opportunities in camp to make the squad.