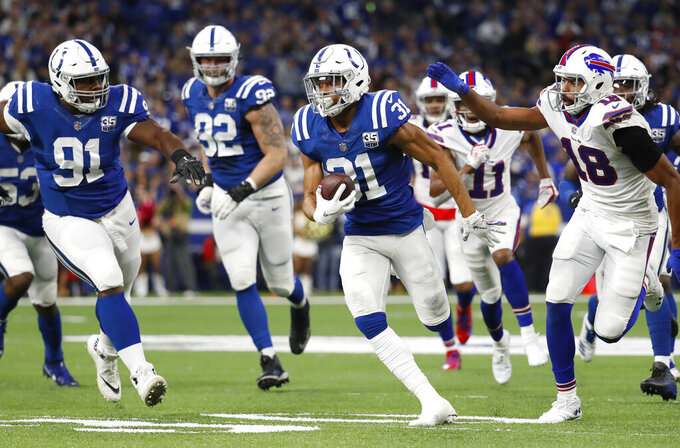 FILE - Indianapolis Colts cornerback Quincy Wilson (31) returns a fumble by Buffalo Bills quarterback Derek Anderson (3) in front of Bill's wide receiver Andre Holmes (18) during the second half of an NFL football game in Indianapolis, in a Sunday, Oct. 21, 2018 file photo. Wilson said Saturday, Aug. 22, 2020 that being traded from the Colts to the Jets "was a good day — probably one of the best days of my life.” (AP Photo/John Minchillo, File)

FLORHAM PARK, N.J. (AP) — Quincy Wilson came to Indianapolis with high hopes and lofty expectations. He left with a huge sense of relief.

The cornerback was surprisingly traded by the Colts to the New York Jets on the final day of the NFL draft in April for a sixth-round pick. The move might have been a bit lost in the shuffle by some during the flurry of activity that marks the draft, but it was an unforgettable moment for Wilson.

“When I got traded, it was a good day — probably one of the best days of my life,” Wilson said Saturday during a video call. “A lot of things went wrong in Indy. But I’m just happy for this new opportunity, this new situation that I’m in that’s way better.

"I'm just ready to show that I can play.”

That's what the 24-year-old Wilson has been doing through the early days of training camp, regularly making plays and knocking away passes — often celebrated by his teammates on defense shouting: “Yeah, Q!”

“You know, it’s a production-based business,” said Wilson, who has two career interceptions. “I just want to focus on doing my job and making some plays to earn the respect of my teammates. And that’s really my only focus right now.”

Wilson developed into a star at Florida, where his teammates included current Jets cornerback Brian Poole and safety Marcus Maye. After a solid showing at the NFL combine, the Colts made Wilson a second-round pick in 2017. He was the first of two cornerbacks taken by the Colts that year, before fifth-rounder Nate Hairston — who's now also with the Jets.

But things simply didn't work out for Wilson in Indianapolis.

“It was a lot of things, man, and it’s probably not the time and place to talk about it,” Wilson said, declining to go into specifics. “But I was just happy for a new opportunity to go somewhere else where they’d value me and let me play football.”

With the Colts, Wilson missed a chunk of his rookie year because of a knee injury but played well in his first two seasons while serving as the team's No. 3 cornerback and thriving in press-man coverage. Indianapolis switched its defense to more of a zone scheme last year and he slid down the depth chart. After starting 10 games the previous two years, Wilson started none last season and appeared in only nine games.

The Jets are banking on Wilson fitting into Gregg Williams' defensive scheme. With Poole and Pierre Desir out with injuries, Wilson has been seeing lots of action on the field this summer.

Defensive backs coach Dennard Wilson scouted Quincy Wilson in college and remembers seeing a cornerback that played with a clear belief in his skills. He's beginning to see that player again.

“I think he lost his confidence for whatever reason,” Dennard Wilson said. “For me as a coach and as a mentor, the biggest thing for me is to get these guys to believe in themselves and get his confidence back and then help him with his technique and what he's supposed to do, his eyes.

Quincy Wilson thinks he has made a smooth transition to the Jets so far, and having two former college teammates around has certainly helped.

But even more than that, Wilson sees a system he thinks he can thrive in. And, a coaching staff that believes in him.

“It’s more aggressive,” he said of the Jets' defense. “They coach you to make plays and not to cover grass. That’s how I’ve always been taught, to go get the ball. And that’s what it is here. ... And that fits me.”