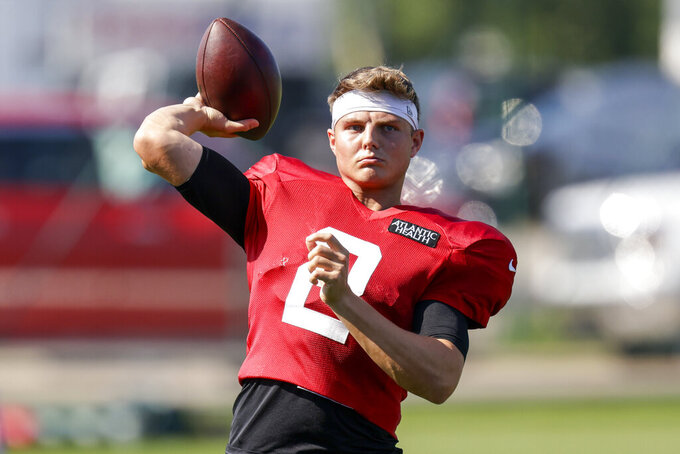 Zach Wilson used to watch Aaron Rodgers on TV as a kid as often as he could, admiring the Green Bay Packers quarterback from afar.

The youngster from Draper, Utah, wanted to play like Rodgers and modeled some of his game after him. Wilson even drew some comparisons to Rodgers en route to being drafted No. 2 overall by the New York Jets in April.

“I’ve always tried to copy what he’s been doing because he’s done it for such a long time,” Wilson said. “He’s just a fun player to watch and he just plays the game the right way.”

With Lambeau Field as the backdrop Wednesday, Wilson got a chance to practice — and chat — with one of his boyhood idols.

“We’re all technically at the same level now, we’re all in the NFL,” Wilson told reporters in Green Bay, “but we’re all kind of like, ‘That’s Aaron Rodgers. That’s kind of crazy.’ It’s still a great tool for us just to be able to learn from him and kind of see what he’s doing.”

The Jets and Packers are holding two joint practices, Wednesday and Thursday, ahead of their preseason game Saturday. It gives both teams a chance to work against another set of players on another team.

It also provided the Jets' young quarterbacks an opportunity to see Rodgers up close.

During special teams drills, Rodgers approached Wilson and they spoke for a few minutes — and then Jets backups Mike White and James Morgan, who grew up near Green Bay and idolized Rodgers and Brett Favre, joined them.

“James was a big fanboy; he was getting a little nervous,” Wilson joked. “Nah, I’m a big fanboy, too. We all kind of got to pretend like we’ve been there before. We enjoy just being out here and being able to talk to him.”

Wilson recently acknowledged Tom Brady is the game's greatest quarterback, but was always drawn to Rodgers. He didn't own a Rodgers jersey or characterize himself as a Packers fan, but Wilson constantly took mental notes on Rodgers.

“He was always the game I always wanted to watch on Sundays,” Wilson said. “I always made sure I was watching his full games, what he was doing.”

Wilson spoke to Rodgers a few times during the offseason when the agency that represents the Packers quarterback was recruiting Wilson ahead of the draft. They ended up not becoming teammates off the field as Wilson chose a different agency. But those conversations — and the ones on the field Wednesday — were invaluable.

“He’s got a lot of knowledge,” Wilson said. “He’s a smart dude, he knows what’s going on out there. It’s cool to ask him about footwork, what’s going on on the field, what he’s seeing. If I could spend more time with him and just keep asking questions, I would.”

Rodgers offered some tips to Wilson and first-time Jets offensive coordinator Mike LaFleur — the younger brother of Packers coach Matt LaFleur — about running the two-minute offense, something the Packers quarterback has done himself over the last several years of his career.

“The biggest thing I picked up ... just how calm and collected he is,” Wilson said. “He’s kind of just out there, almost like he’s just messing around, playing backyard football. He’s having a good time and he makes it work.”

Wilson is the latest quarterback drafted by the Jets with the hope he can be the face of the franchise — and a consistent winner — for years to come.

The way Rodgers has delivered for the Packers.

“It would be obviously a dream come true to be where he’s at in his career and everything he’s accomplished,” Wilson said. “I obviously have the opportunity to do that and so I’m just going to learn as much as I can from him and all the other great quarterbacks in the league and just take it a day at a time, the process of just making sure I keep learning and getting better.”

NOTES: LG Alijah Vera-Tucker (pectoral), WR Elijah Moore (quadriceps) and S Lamarcus Joyner (lower back spasms) were among those who sat out practice. ... Morgan, the Jets' fourth-round pick out of FIU last year, was born in Green Bay and lived in nearby Ashwaubenon — making the trip a bit of a homecoming for the QB. “Hopefully he doesn’t make it the Catalina Wine Mixer,” Saleh joked, referencing a party scene from the Will Ferrell movie “Step Brothers” from 2008. “I know he’s from here and I know he’s really amped up to show how good he is. So we’re excited for him, but at the same time, he’s got to stay in the moment and treat it like every other day.”