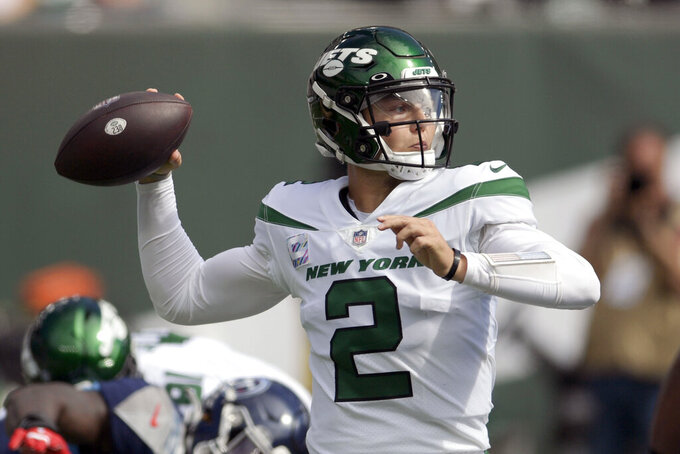 FILE - New York Jets quarterback Zach Wilson passes during the first half of an NFL football game against the Tennessee Titans, Sunday, Oct. 3, 2021, in East Rutherford. Zach Wilson will return as the New York Jets' starting quarterback Sunday, Nov. 28, 2021 against the Texans in Houston, according to a person with direct knowledge of the decision.(AP Photo/Bill Kostroun, File)

FLORHAM PARK, N.J. (AP) — Zach Wilson waited a month to get back to this spot.

The New York Jets rookie quarterback is fully healthy and the starting job is his again.

“It feels awesome,” Wilson said Wednesday. “You know, just that rush, that feeling you get just to be back on the field, it's exciting. I'm just happy to be back with the guys.”

Wilson sprained the posterior collateral ligament in his right knee against New England on Oct. 24. He spent the last four weeks recovering and rehabilitating, keeping patient while the Jets played on without him. He worked out before each of the last two games and his knee showed improvement, but coach Robert Saleh insisted the team wouldn't play Wilson until he was completely healthy.

He'll get that chance Sunday at Houston when the Jets take on the Texans — with both teams struggling to 2-8 records.

“As soon as we got clearance that he was fully healthy and he was ready to roll and he was good mentally,” Saleh said, “we were good with the decision.”

And New York is lucky Wilson is ready to play because backups Mike White and Joe Flacco were put on the COVID-19 list Tuesday. White tested positive, so he's out for the game. Flacco, who is unvaccinated, is a close contact and must test negative for five straight days — so Saleh said there's still a chance he could travel separately from the team and be able to play Sunday. But the plan is to elevate Josh Johnson from the practice squad to be Wilson's backup.

While Wilson was sidelined, the Jets' offense showed marked improvement. Once ranked near the bottom of several categories, New York has been one of the NFL's most efficient lately. The Jets have averaged an NFL-leading 346.5 yards passing in the last four games behind White, Flacco and Johnson. New York also has the most TD passes (10) and first downs on passes (74) in that span.

Wilson was struggling with just four touchdowns and nine interceptions at the time of his injury, with Saleh and offensive coordinator Mike LaFleur calling for the QB to play “boring” football — in other words, taking what the defenses give him and not trying to do too much. So there could be questions whether he'll feel pressure to maintain that level of consistent production.

“No, of course not,” Wilson insisted. “I mean, I play my ball. I play ball. And, you know, credit to those guys. I was able to learn from their reps and everything they went through, but I've got to go in there and play my game and not worry about that stuff.”

During his time on the sideline, Wilson studied the offense and how the other quarterbacks were operating it on the field. He also watched his own tape and acknowledged he saw things that made him question why he reacted a certain way on some plays.

The Jets have raved about Wilson's insatiable hunger to learn and his ability to devour the playbook and game film. So the young quarterback believes he'll only come out better — physically and mentally — after this layoff.

“I feel like what I’m looking for, what I need to do as a quarterback is heading in the right direction,” Wilson said. “Of course you’re still learning, but I feel like I’m going in the right direction as far as my understanding of the game and what I’m looking for. And really the ability to just go through the offense and the mindset, I guess you could say, of just making the best decision, every single play for the team. And putting those guys first.”

Wilson and the Jets believe he'll be better from the last time he played. Others?

“I don’t really care what anybody really thinks, if I’m being honest,” Wilson said. “I want to see improvement in myself as far as when I watch the tape at the end of the day, do I see improvement? You know, not necessarily looking at a stat line or just the win column.

“When we handle our business, each individual player, the wins will take care of themselves.”

NOTES: WR Corey Davis (groin), DL Folorunso Fatukasi (foot), DT Nathan Shepherd (elbow), DE Shaq Lawson (wrist) and LB C.J. Mosley (shoulder) were all limited at practice. Saleh didn't mention the injuries to Davis or Fatukasi before practice, so it appears those happened during the session. ... FB Nick Bawden was signed to the active roster and LB LaRoy Reynolds was restored to the practice squad after he had been on the practice squad/injured reserve. ... The Jets signed QB James Morgan to the practice squad and released DB Natrell Jamerson to make room. Morgan, a fourth-round pick of New York last year, was cut before the season. He spent time with Carolina and Pittsburgh before returning to the Jets.