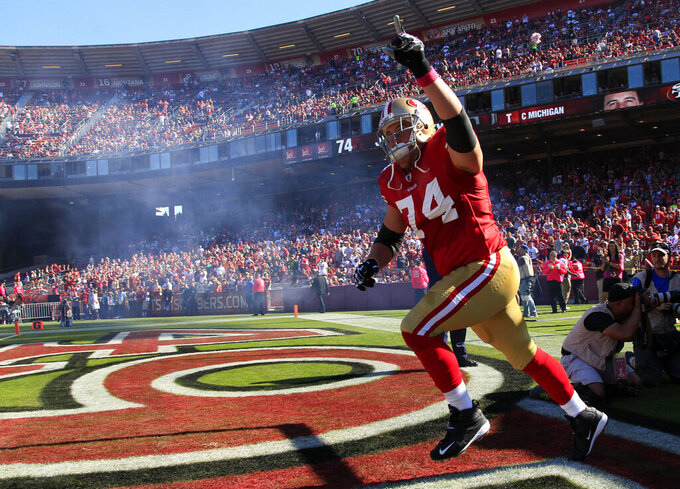 FILE - In this Oct. 30, 2011, file photo, San Francisco 49ers offensive tackle Joe Staley (74) runs onto the field as the teams are introduced before their NFL football game against the Cleveland Browns in San Francisco. Staley was the one constant in San Francisco during a more than decade-long roller coaster that saw the 49ers go from the basement to the Super Bowl twice in a career that ended with his retirement last week. (AP Photo/Marcio Jose Sanchez, File)

When Joe Staley announced his retirement following a stellar 13-year career in San Francisco, he was taken aback by the tributes that poured in from former 49ers teammates, coaches and competitors.

The limelight in the NFL is usually reserved for the players who catch, run or throw the ball, not the behind-the-scene workers who help make all that happen.

“I was absolutely overwhelmed and blown away from the response from everybody,” Staley said Tuesday. “That meant so much to me. I’m a lineman. It’s our job to not be noticed and it’s our job to just do our job and do the grunt work. It was really cool.”

It was also well-deserved for a player who was one of the best in the game at what he did since entering the NFL as a first-round pick out of Central Michigan in 2007.

Staley made six Pro Bowls, played 181 games and was recently honored as one of the NFL’s all-decade players for the 2010s.

His signature play came in his first playoff game for the 49ers in January 2012. With San Francisco trailing New Orleans 24-23 in the closing minutes, Staley showed off his speed when he pulled on a keeper, raced down the field ahead of Alex Smith and laid the key block against Roman Harper on a 28-yard TD run that helped the Niners reach the NFC title game.

But he takes more pride in his less-noticed work, like times he flattened a defender on a double-team block or gave his quarterback time to throw deep at a crucial moment.

Staley was able to thrive in the power game that was prevalent early in his career and had the athleticism to succeed in the more wide-open modern game.

“I think he’s a Hall of Famer without a doubt. It’s a no-brainer,” said Niners right tackle Mike McGlinchey, who was taken under Staley’s wing after being a first-round pick in 2018.

“Joe was the most complete offensive tackle of his generation and that’s something that should be without a doubt entrenched in the Hall of Fame.”

While Staley provided steady play almost from the start, his career was a bit of a roller coaster from a team standpoint.

He played for six coaches during his time in San Francisco, dealing with the early struggles under Mike Nolan and Mike Singletary to a resurgence under Jim Harbaugh that featured three trips to the NFC title game and one Super Bowl loss to a downfall under Jim Tomsula and Chip Kelly.

Staley felt revived when Kyle Shanahan took over in 2017, leading to a 13-win season last year and a second trip to the Super Bowl.

But what should have been an enjoyable season of on-field success proved to be the toughest of Staley’s career. He broke his leg in Week 2, broke a finger his first game back in Week 10, and then dealt with a neck injury that got progressively worse through the end of the season and ultimately led to his decision to retire at age 35.

Staley said he started thinking about retirement shortly after the Super Bowl and informed the Niners of his final decision last week before the draft so they could plan for his replacement.

He was pleased the team was able to do that by acquiring seven-time Pro Bowler Trent Williams but his teammates know it will be difficult to fill the void he leaves behind.

“I don’t think there’s any replacing Joe Staley,” star tight end George Kittle said. “What Joe did such a great job of was he did instill a lot of values and virtues with the team. We’re all going to have our opportunity to step up and fill the shoes Joe left behind. I don’t think any one person can do it but I think we have a great group of guys who can come together and fill that role.”

Staley’s career ended with a second narrow Super Bowl loss as he was unable to win the ultimate prize in football.