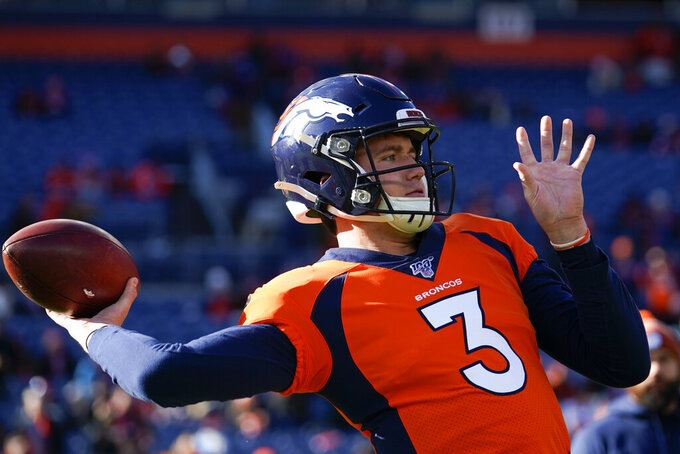 ENGLEWOOD, Colo. (AP) — For the first time since Super Bowl 50, John Elway heads into an offseason not looking to change his head coach, starting quarterback or locker room chemistry.

Elway said Monday that rookie Drew Lock showed enough in his five-week audition to earn the nod as the Denver Broncos' starting QB heading into 2020.

He also said he's a bigger fan than ever of head coach Vic Fangio and believes the Broncos, who went 7-5 after a winless September, have finally turned the corner despite missing out on the playoffs for a fourth consecutive season.

The biggest question awaiting Elway at his annual state-of-the-team news conference Monday was whether he's all-in on Lock, who came off IR to inject moxie, mobility and modernity into Denver's poky offense.

"Well, I mean, I don't see any (other) options right now," Elway said. "Obviously, he finished and did a heck of a job, winning four out of five games and played well. He's still has a long way to go, he's got a lot of work to do, but we're exited about where Drew is. We don't like to show our hand, but I think it's unrealistic to say that we're going a different direction."

So, if Elway signs a veteran QB in free agency or drafts one in the lower rounds, it'll be to add depth at the position, not competition.

Lock told The Associated Press that he sees himself as the guy in Denver now but will work this offseason as though he still has plenty to prove.

"I'm one of 32 human beings who are starting NFL quarterbacks in this world, but no, I don't want to be 32, I want to try eventually to be No. 1," he said. "You go about that with a lackadaisical mindset, you'll never get there."

Elway, who switched head coaches three times in five years and flirted with bringing back Mike Shanahan two years ago, said he loved working alongside Fangio, a first-time head coach at age 61.

"Vic has been everything that I thought he would be and a heck of a lot more," Elway said.

Elway credited his rookie head coach and his rookie quarterback with injecting enthusiasm into the organization that has missed the playoffs four consecutive years.

"We're at the point where the good feeling is we've bounced off the bottom," Elway said. "The whole thing when you're losing is getting that locker room turned around. ... That locker room is excited again."

So is the fan base, although 38,000 no-shows over the final three home games shows there's work to be done.

Elway will have up to a dozen draft picks and $80 million in cap space to bolster a roster that's already the third youngest in the NFL.

"Things are trending up," Elway said. “Now, that's not to say they're going to continue to go that way. We've got a lot of work to do. We've got to get better in a lot of spots.”

Other things to keep in mind this offseason after the Broncos' second-place finish in the AFC West:

Team president Joe Ellis said Brittany Bowlen, who rejoined the organization last month, "has distinguished herself as the one child that we're looking at to possibly take over her father's role" as controlling owner of the team.

"There's a lot that goes into that, and there will need to be some cooperation from everybody in the family for that to happen," Ellis said.

Some of the late Hall of Famer Pat Bowlen's adult children are seeking to have Ellis and the two other trustees removed, alleging that their father was already in the throes of Alzheimer's disease in 2009 when he rewrote his 2002 trust. That case goes to court in September.

Unlike Peyton Manning, Flacco said his neck injury hasn't caused him to lose any feeling in his fingertips.

He said he'll get another MRI in February but doesn't know if he'll need surgery.

“It one sense, it's nice that I'm not walking around in pain,” Flacco said, “and in the other sense, it's kind of annoying that I don't have anything wrong with me, I feel pretty normal. But I can't play."

FS Justin Simmons is likely headed for the franchise tag if he doesn't agree to a new contract. DE Derek Wolfe's elbow injury might make it more likely he re-signs with Denver. DE Shelby Harris and CB Chris Harris Jr. could command enticing offers on the open market.

Chris Harris Jr. said he'd love to return but also posted a heartfelt thank you to Broncos fans on social media. He revealed at his locker that he'd switched agencies and had turned down a three-year, $36 million offer from the Broncos just before the trade deadline.

Harris said Lock's emergence makes it tougher to think about moving on.

Elway would be wise to avoid the vintage veterans in free agency. SS Kareem Jackson was the only member of Denver's $107.5 million class of 2019 to pay an immediate dividend. RT Ja'Wuan James (knee) played just 63 snaps all season, but that was 63 more than CB Bryce Callahan (foot) and RB Theo Riddick (shoulder).

Elway said he loved what Jackson brought to the mix and that injuries are just an unfortunate part of football: "So, we're going to go into free agency the same way. We're going to do all the homework we can and hope we don't have the luck we had this year with the injuries. But we think there's some quality football players out there that can help us."