John Elway's name is all over Broncos' long draft history 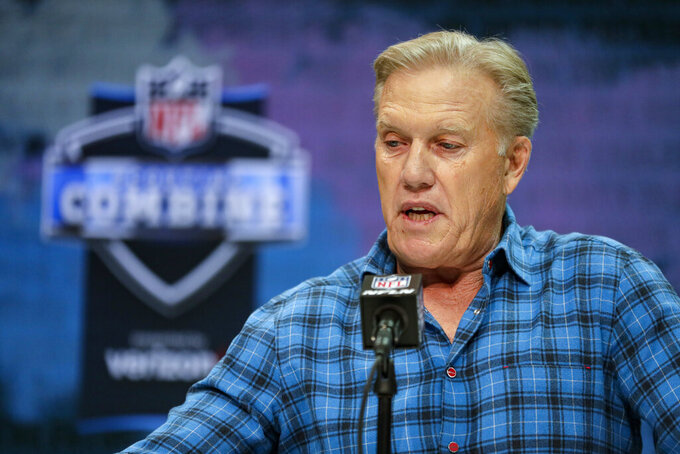 BEST FIRST-ROUND DRAFT PICK: John Elway’s first draft pick was his best: Texas A&M LB Von Miller with the second overall selection in 2011, one spot behind Cam Newton. Five years later, the two squared off in Super Bowl 50, where Miller got the best of Carolina’s QB with a pair of sacks that led to TDs in Denver’s 24-10 win. Miller parlayed his MVP performance into a record-breaking contract and Newton has never been the same. (Also noteworthy: Syracuse RB Floyd Little in 1967, Arkansas S Steve Atwater in 1989, Boise State LT Ryan Clady in 2008).

BEST SECOND-ROUND DRAFT PICK: Miami RB Clinton Portis was the 51st player selected in 2002. Although his top claim to fame was getting traded for Hall of Fame CB Champ Bailey, Portis had a spectacular nine-year NFL career. In two seasons in Denver he averaged 1,549 yards rushing and 14½ touchdowns.

BEST LATE-ROUND DRAFT PICK: Mike Shanahan took a flyer on Georgia RB Terrell Davis in the sixth round in 1995. The 196th player selected, Davis introduced himself to the NFL — and to his own teammates — with a bone-rattling hit of 49ers KR Tyrone Drakeford in a preseason game in Tokyo. It prompted fellow future Hall of Famer Shannon Sharpe to marvel, “Who was that?” Everybody knew him after he became the only running back in NFL history to own back-to-back Super Bowl titles, an MVP trophy, a Super Bowl MVP honor, a 2,000-yard season and seven consecutive playoff wins in which he topped 100 yards rushing.

WORST FIRST-ROUND DRAFT PICK: Cowboys owner Jerry Jones lamented his sleepless night after Elway outmaneuvered him and moved up five spots to select Memphis QB Paxton Lynch 26th overall in 2016. He shouldn’t have lost any sleep. He grabbed Dak Prescott, a fourth-round steal, and Lynch went 1-3 in Denver, regressed each of his three summers with the Broncos and was leapfrogged by seventh-rounders Trevor Siemian (twice) and Chad Kelly.

WORST SECOND-ROUND DRAFT PICK: When Josh McDaniels selected North Carolina TE Richard Quinn 64th overall in 2009, nobody was more surprised than Quinn himself. He told the media in a conference call that he and his agent figured he wouldn't get drafted at all. McDaniels touted Quinn’s receiving capabilities despite his catching just a dozen passes in three years at North Carolina. Quinn played two years in Denver and caught one pass for 9 yards.

BEST DRAFT TRADE: Elway refused to play in Baltimore, which selected him first overall in 1983. So the Colts traded the draft rights to the Stanford QB to Denver for QB Mark Herrmann, the rights to OT Chris Hinton and a first-round pick in the 1984 draft. Baltimore used that selection on G Ron Solt. Elway took the Broncos to five Super Bowls and won his last two.

WORST DRAFT TRADE: This one also involves John Elway, who moved up five spots to select Lynch in 2016. The Broncos were coming off a Super Bowl win but lost Peyton Manning to retirement and Brock Osweiler to free agency. Elway traded for Mark Sanchez and drafted Lynch, only to watch a seventh-rounder from the previous year Siemian beat out both that summer. Sanchez was jettisoned and Lynch promoted to No. 2 so he could get work as the backup. “That was a miss,” Elway said after getting rid of Lynch in 2018.

DID YOU KNOW THEY ONCE DRAFTED?: Illinois LB Dick Butkus with a second-round pick in 1965, three years after selecting Utah State T Merlin Olsen in the first round. Both eventual Hall of Famers spurned the AFL for the NFL, Butkus earning five All-Pro honors in his nine-year career in Chicago, Olsen playing 15 years for the Rams. Olsen also starred on the small screen, portraying farmer Jonathan Garvey on “Little House on the Prairie.”