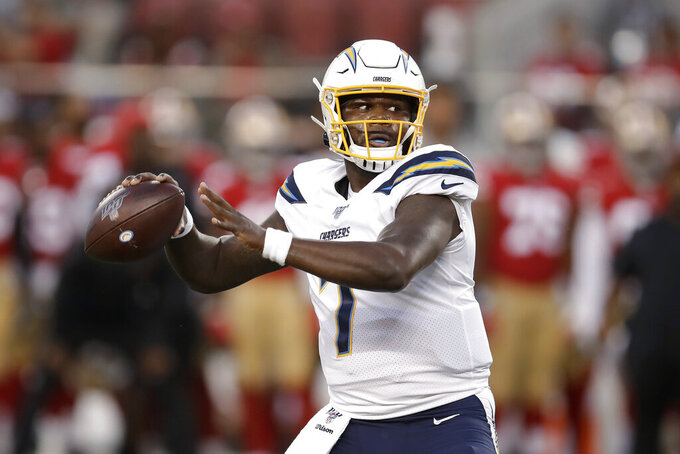 SANTA CLARA, Calif. (AP) — Cardale Jones made his final case to the Los Angeles Chargers to keep three quarterbacks on the roster.

Jones led scoring drives on Los Angeles' first four possessions in his bid to make the team and the Chargers finished the exhibition season by beating the San Francisco 49ers 27-24 Thursday night.

"I just want to have an opportunity to provide for the team whatever position I'm going to be, 1-2-3, whatever it may be," Jones said. "I'm just trying to take advantage of it whenever my number is called."

Jones got the start while Philip Rivers and Tyrod Taylor rested and led the Chargers (1-3) to a pair of field goals and two touchdowns. He scored the final one himself with a diving 2-yard run , stretching the ball just inside the pylon.

Rookie Easton Stick, who is also in the mix if the team decides to keep three QBs, threw two interceptions in the second half before leading a winning drive to Derrick Gore's 11-yard run with 1:17 to play.

"Right now, we just have to find the best players, the guys that can help us in the long run," coach Anthony Lynn said. "It's going to be tough to do that."

The 49ers plan to keep three quarterbacks with the question there about whether C.J. Beathard or Nick Mullens will serve as Jimmy Garoppolo's backup.

Beathard threw one touchdown pass for San Francisco (3-1), but his best play might have been on a downfield block that sprung Jeff Wilson for a 41-yard touchdown run in the first quarter.

"To see the cornerback sitting there, then to see C.J behind me and for him to take off just gave me that extra power," Wilson said. "I was like, 'I have to put it in now.' If C.J. comes out there and blocks for me in the fourth preseason game. That speaks to his character. I was just trying to make his block that much better."

Beathard went 6 for 9 for 58 yards, connecting on a 21-yard score to a sliding Kendrick Bourne on his final pass of the night late in the first half.

"That's what you want to do right there is try to get one there, and we got that," Beathard said. "There's obviously a lot of stuff to clean up, but I felt good about the game."

Mullens played only one series in the second half before coach Kyle Shanahan turned it over to undrafted rookie Wilton Speight for the rest of the game.

Wilson completed a strong preseason with 20 carries for 100 yards and his fourth TD run in the past three games. Wilson could get a spot on the roster, especially if Jerick McKinnon starts the season on injured reserve after having another setback in his recovery from an ACL injury.

Los Angeles second-round safety Nasir Adderley got his first snaps of the preseason after dealing with a hamstring issue most of training camp. He dropped a potential interception against Speight in the third quarter, then held onto one in the fourth.

"It felt great, especially with all of the adversity I've faced the last couple of weeks," he said. "Dealing with this hamstring issue, I felt great out there and it was a blessing to be with my teammates and celebrating with them. It's different when you're out there."

Both teams rested almost all of their starters as they wanted to stay as healthy as possible before the opener. Among the front-line players not suiting up were brothers Nick Bosa of San Francisco and Joey Bosa of Los Angeles. The two defensive ends greeted each other before the game, the first time they've been on the same field together as pros.

Niners S Adrian Colbert left with a hamstring injury. ... San Francisco rookie WR Jalen Hurd sat out with a back injury that was more serious than the team originally thought and he is likely to miss at least the season opener.